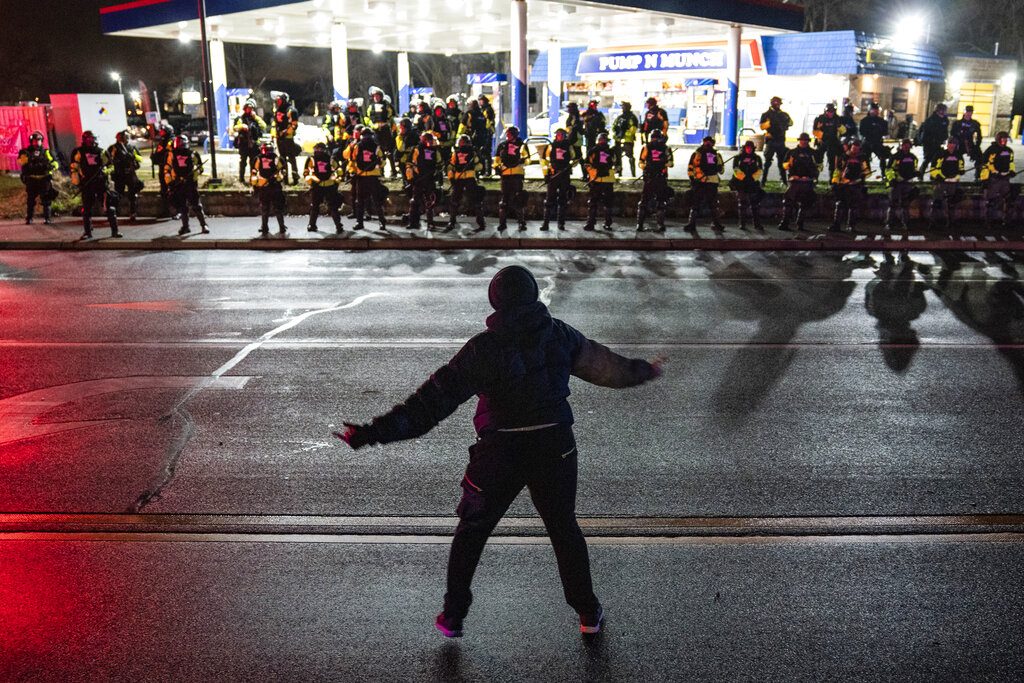 A white Minnesota police officer who fatally shot a Black man during a traffic stop in a Minneapolis suburb resigned Tuesday.

The city’s police chief has said he believes Potter mistakenly grabbed her gun when she was going for her Taser. She can be heard on her body camera video shouting “Taser! Taser!”

“Whenever, through the line of duty, someone kills another human being, there must be accountability,” Brooklyn Center Mayor Mike Elliott told the “Today” show earlier Tuesday.

Activists and some residents say Wright was racially profiled, and his death has sparked two days of clashes between police and protesters. The shooting happened as the Minneapolis area was already on edge over the trial of the first of four police officers in George Floyd’s death.

Brooklyn Center Mayor Mike Elliott called the shooting in his city “deeply tragic” and said the officer should be fired. Elliott, the city’s first Black mayor, announced Monday night that the City Council had fired the city manager and voted to give the mayor’s office “command authority” over the police force.

“We’re going to do everything we can to ensure that justice is done and our communities are made whole,” Elliott said.

Wright’s family planned to speak again Tuesday alongside the family of George Floyd at the courthouse where the trial is being held for a former Minneapolis police officer charged in his death. Protests erupted for a second night following Sunday’s shooting, heightening anxiety in an area already on edge as the Derek Chauvin trial progresses. Floyd, a Black man, died May 25 after Chauvin, who is white, pressed his knee against Floyd’s neck.

Chauvin and three other officers were fired the day after Floyd’s death.

The Minnesota Police and Peace Officers Association, the police union, issued a statement Tuesday saying “no conclusions should be made until the investigation is complete.”

The advent of social media and body cameras has forced police departments to move much quickly than in the past, said Alex Piquero, chairman of the University of Miami’s sociology department. However, he said that before the Brooklyn Center Police Department fires the officer, it will likely review all evidence, including any other body camera footage and testimony from other officers, so that the dismissal is less vulnerable to any court challenge.

“We don’t know why she reached for her firearm instead of her Taser,” Piquero said.

Court records show Wright was being sought after failing to appear in court on charges that he fled from officers and possessed a gun without a permit during an encounter with Minneapolis police in June.

Demonstrators began to gather shortly after the shooting, with some jumping atop police cars.

On Monday, hundreds of protesters gathered hours after a dusk-to-dawn curfew was announced by the governor.

When protesters wouldn’t disperse, police began firing gas canisters and flash-bang grenades, sending clouds wafting over the crowd and chasing some protesters away. Forty people were arrested, Minnesota State Patrol Col. Matt Langer said at a news conference early Tuesday. In Minneapolis, 13 arrests were made, including for burglaries and curfew violations, police said.

Brooklyn Center is a modest suburb just north of Minneapolis that has seen its demographics shift dramatically in recent years. In 2000, more than 70% of the city was white. Today, a majority of residents are Black, Asian or Latino.

Wright’s death prompted protests in other U.S. cities, including in Portland, Oregon, where police said a demonstration turned into a riot Monday night, with some in the crowd throwing rocks and other projectiles at officers.