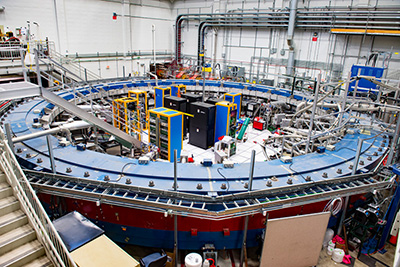 It isn’t often that the results of an experiment in quantum physics — the scientific field that seeks to describe the physical properties of nature at the scale of atoms and subatomic particles — garner scientists’ excitement and breathless worldwide media coverage.

But it did so last week, when word out of the Fermi National Accelerator Laboratory in Batavia, Illinois, yielded reports that a “breakthrough” had been achieved in understanding the most fundamental perceptible building blocks of the universe.

The new discovery, though, was noteworthy not because it advanced some theory but rather because it threw a monkey wrench into the decades-old, assumed-complete, understanding of the subatomic world known as the “Standard Model.”

The Standard Model is a compendium of equations that describe what are believed to be the 17 fundamental infinitesimal particles that exist and how they interact.

The experiment that caused all the ruckus was actually a redo of one that took place back in 2001 at the Brookhaven National Laboratory on Long Island. That particle accelerator test sought to establish various facts about a very short-lived particle called a muon (pronounced myu-ahn), which resembles the common electron but has a much larger mass. The results of that experiment included a deviation in the measurement of the tiny particle’s magnetic rotation from what was expected.

At the time, it was assumed by many that the finding might have been attributable to experimental error or to some other fluke. But last week, the results of the redone particle accelerator experiment at Batavia — presided over by an international team of 200 physicists from seven countries — confirmed the results of the decades-old one, suggesting strongly that there are things, very likely fundamental things, taking place in the quantum world that have yet to be discovered.

While the difference between a measurement of 0.00116592040 and an expected one of 0.00116591810 might not excite most of us, the deviation was considered monumental by scientists who work in quantum physics.

Professor Mark Lancaster, who headed the U.K. participant team for the experiment, told BBC News: “We have found the interaction of muons are not in agreement with the Standard Model. Clearly, this is very exciting because it potentially points to a future with new laws of physics, new particles and a new force which we have not seen to date.”

As it happens, the discovery of the muon itself, back in 1936, was itself a surprise, leading a renowned physicist, I. I. Rabi (whose name, given at his bris, was Yisrael Yitzchak) to remark, famously, “Who ordered that?”

But the muon, in the end, fit well into the Standard Model, and it resided there peacefully (or at least as peacefully as any entity that exists for only two millionths of a second can reside). Until last week.

Scientism, the belief that all can be understood through observation and analysis of data — has become an idolatry of sorts to many.

In every generation, there are those who convince themselves that the scientific knowledge of the time is complete, and that the human mind has grasped all that there is to grasp. And, so far, every subsequent generation has proven the prior one wrong. There have also been major revolutions in science’s understanding of the universe since the times of the ancient Greeks; and the precise and predictable laws that Newton established in the 17th century were no less vulnerable to new knowledge than any of the systems that came before, and were subtly but unmistakably undermined by Einstein and others in the 20th.

Human hubris is its own scientifically confirmed fact. And the only brakes on it are new findings that cast doubt on the “established truths” of the past. Like the recent results of the muon experiment.

But, as no less famous a scientist than Charles Darwin wrote, “it is always advisable,” when dealing with things beyond our immediate experience, “to perceive clearly our ignorance.”

A year ago, a great challenge was presented to the scientific community’s medical branch with the onset of the COVID-19 pandemic. There was much fear and concern about whether the disease could be controlled. Baruch Hashem, although many and terrible losses were wrought by the virus, effective treatments and vaccines were eventually developed.

But it’s important for us all to realize that, even with the great benefits that emerge from scientific knowledge and its application, human understanding of the world, even of its most basic components, remains a “work in progress,” as last week’s announcement reminded us.

It is always wise, ironically but clearly, as Darwin admitted, to “perceive clearly our ignorance,” ultimately, of the physical world.