Iran‘s semi-official Nournews website said the person who caused an electricity outage in one of the production halls at the underground uranium-enrichment plant had been identified. “Necessary measures are being taken to arrest this person,” the website reported, without giving details about the person.

Iranian authorities described the incident a day earlier as an act of “nuclear terrorism” and said Tehran reserves the right to take action against the perpetrators.

Iran and world powers held what they described as “constructive” talks last week aimed at reviving the 2015 nuclear deal with Tehran that Washington abandoned three years ago.

“The Zionists want to take revenge because of our progress in the way to lift sanctions… they have publicly said that they will not allow this. But we will take our revenge from the Zionists,” Zarif was quoted as saying. 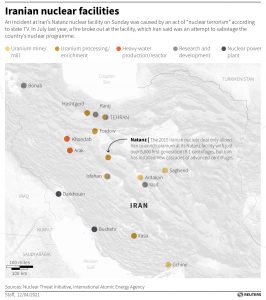 Multiple Israeli media outlets have quoted unnamed intelligence sources as saying that the country’s Mossad service carried out a successful sabotage operation at the Natanz site, potentially setting back enrichment work there by months. Israel has not formally commented on the incident.

The Natanz uranium-enrichment site, much of which is underground, is one of several Iranian facilities monitored by inspectors of the International Atomic Energy Agency (IAEA), the U.N. nuclear watchdog. Foreign Ministry spokesman Saeed Khatibzadeh told a news conference on Monday that the Natanz incident could be considered as an “act against humanity,” adding that it had caused “no contamination or casualties” at the site.

“Our nuclear experts are assessing the damage but I can assure you that Iran will replace damaged uranium-enrichment centrifuges in Natanz with advanced ones,” Khatibzadeh said.

A senior U.S. administration official said Washington had no involvement in the incident. “We have nothing to add to speculation about the causes,” the official said.