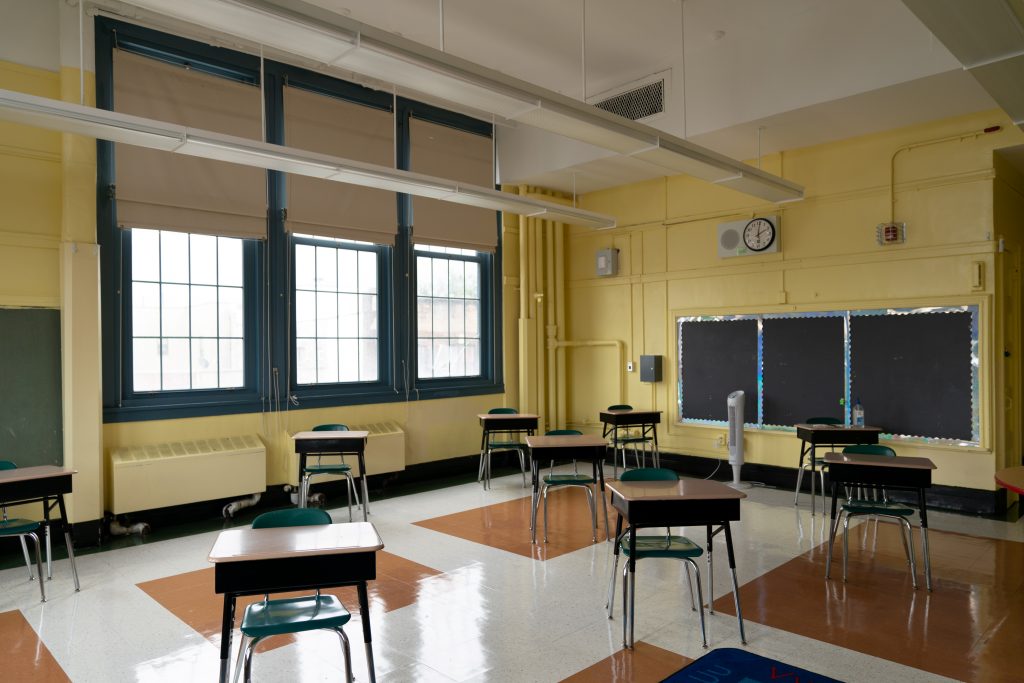 New York State on Friday eased reopening restrictions on schools to allow most students to sit closer together as long as they continue to wear masks.

But before they can make any changes, school districts will have to allow parents, school staff and local health officials to weigh in, under guidance released by the state Department of Health.

“Ultimately, the school/district’s decision to move to shorter physical distances will come down to a local community’s risk tolerance based on its unique circumstances,” the 24-page document released late Friday said.

The distancing change, which follows federal guidance, is expected to allow schools to bring more students back to buildings and reduce their reliance on distance learning that has most students participating from home for at least part of the week.

President Joe Biden has made it a priority to fully reopen K-8 schools by the end of April, but superintendents in New York have been frustrated by the state’s delay in acting on federal guidance issued last month that says students wearing masks can safely sit just 3 feet, rather than 6 feet, apart in the classroom.

The revised state guidelines allow for at least 3 feet of distance between students in elementary, middle and high school classrooms in counties with a low or moderate risk of transmission.

In counties where infection rates are high, middle and high schools should still aim for 6 feet of distancing unless they can maintain “cohorting,” where groups of students remain together through the day.

Parents in four western New York districts have sued in recent weeks to resume full-time live instruction. Districts say distancing requirements have sharply limited how many students they can accommodate and forced them to remove desks and stagger schedules.

In the Williamsville Central School District, one of the districts being sued, Acting Superintendent John McKenna said in a recorded April 1 community update that all of the district’s schools were prepared to bring students in full-time if the state revised its guidelines.

“We will be reviewing this guidance throughout the weekend and will provide an update to our school community on Monday,” McKenna wrote on the district’s website late Friday.

About 18% of New York public school fourth-graders had access to full-time, in-person instruction in February, while 80% were offered a hybrid mix of in-person and remote learning, according to a Biden administration survey.

Nationwide, nearly 46% of public schools offered five days a week of in-person learning to all students, according to the survey, but just 34% of students were learning full time in the classroom. The gap was most pronounced among older K-12 students, with just 29% of eighth graders getting five days a week of learning at school.

Even before the CDC revised distancing guidance for schools, some states and communities had disregarded the 6-foot recommendations, citing more relaxed guidelines from the World Health Organization, which urges 1 meter in schools, and the American Academy of Pediatrics, which says to space desks “3 feet apart and ideally 6 feet apart.”