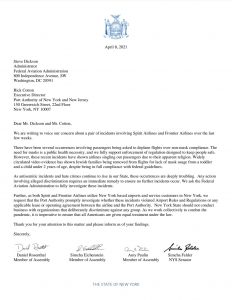 Four members of the New York State legislature have called on the Federal Aviation Administration and the Port Authority of New York and New Jersey to investigate recent incidents on Frontier Airlines and Spirit Airlines where Jewish passengers were forced to deplane after being charged with non-compliance with COVID masking regulations.

In an incident on March 1, 2021, a Jewish couple was asked by a crew member of Frontier Airlines to leave the plane after the crew claimed they refused to wear masks. Video footage shows that they were wearing masks when they were asked to leave the plane. Eventually, all of the passengers were forced off the plane and the flight was cancelled. Fellow passengers stated that the complaint seemed to be that an 18-month old baby was not wearing a mask, despite the fact that masks are not required for children under 2 years old.

Felder wrote that he had been personally contacted by the victims, who told him they had been wearing masks and pleaded to stay on.

“This incident is extremely upsetting and its proximity to recent similar incidents signals an alarming and disturbing trend,” Felder concluded.

On April 5, 2021, a Spirit Airlines flight from Orlando to Atlantic City was delayed for hours when the crew demanded a family travelling with a special needs child and a 2 year old toddler deplane for non-compliance with mask regulations. Video of that incident shows the parents were wearing masks, and the crew members seems to indicate that the problem was with the 2 year old girl who refused to wear the mask while eating a yogurt. After a delay of several hours, all passengers were allowed to re-board the plane and the flight continued on to Atlantic City.

As a result of those incidents, NYS Assembly Members Daniel Rosenthal, Simcha Eichenstein, Amy Paulin and NYS Senator Simcha Felder sent their letter in which they asked the FAA and the PA to investigate claims of religious discrimination in those cases.

“As antisemetic incidents and hate crimes continue to rise on our state, these occurrences are deeply troubling,” the elected officials wrote. “Any action involving alleged discrimination requires immediate remedy to ensure no further incidents occur.”