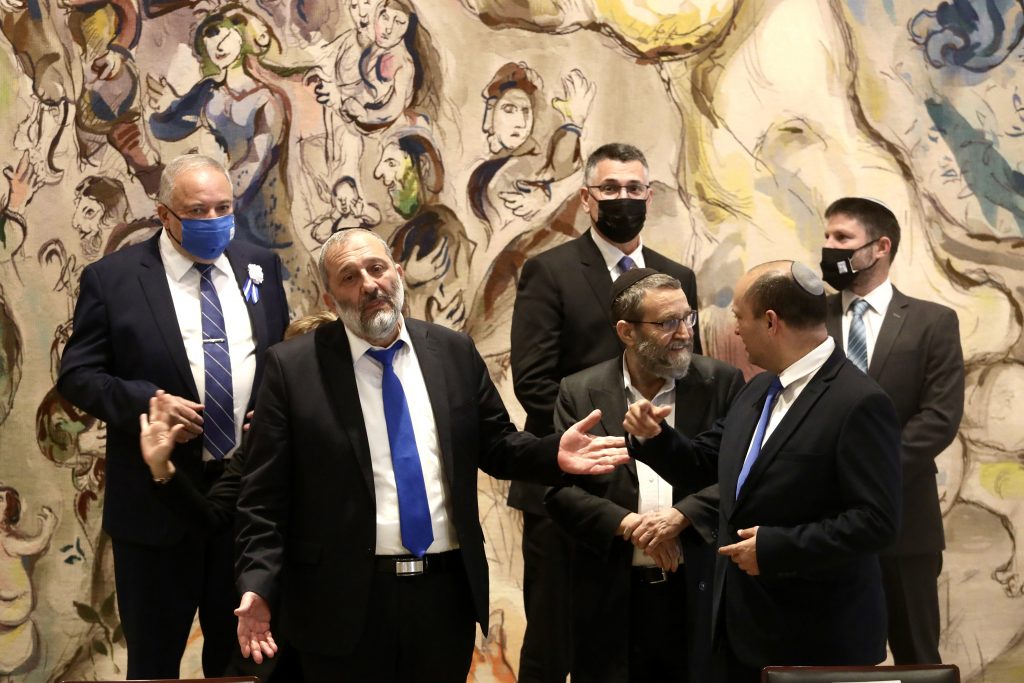 With the 24th Knesset sworn in on Tuesday, and having been tapped by President Reuven Rivlin, Prime Minister Binyamin Netanyahu began Wednesday to work on a formation of a new government.

In the coming 28 days allotted to him, the Prime Minister will try to maintain the partnership with his “natural allies” who recommended him for the premiership, try to court Naftali Bennet, whose Yamina party did not nominate him during talks with Rivlin on Monday, and try to do what currently seems impossible to achieve and reach a Knesset majority of 61 seats.

As of now, Netanyahu has 52 MKs at his side, still nine short of the votes needed.

On Wednesday, Netanyahu held coalition talks with leaders of Shas, United Torah Judaism and the Religious Zionist party, while on Thursday he is set to meet with Bennett in order to convince him not to form a government with the anti-Netanyahu bloc.

New Hope leader Gideon Sa’ar was not invited to any coalition talks with the Likud party or the Prime Minister.

At the start of a Likud faction meeting Tuesday, Netanyahu said that he was given the mandate to form a government “thanks to the over a million of Likud voters who once again ensured the Likud remain the biggest party by a margin, and thanks to the other million voters who voted for the other parties who want me to continue leading Israel.

“We will make every effort to justify your vote and steer Israel away from the threat of a fifth election [since April 2019]. We will form a strong government for all Israeli citizens. Not a paralyzed government, but an active one. It is time for the boycotts to end,” he promised.

Towards the end of the meeting, when the cameras and reporters left, Netanyahu reassured his faction members of his confidence in being able to form a coalition.

“It is not an easy task, but also not an impossible one,” he said. “The objective is achievable. I believe we will be able to do this.”

Fellow Likud members lambasted President Rivlin for his conduct. On Monday, the President gave the mandate to form a coalition to Netanyahu but clearly expressed his reservations to do so and without inviting the Prime Minister to a traditional ceremony at the President’s official residence.

Rivlin also decided to skip the traditional picture taken at the opening of every new Knesset with fellow party leaders, the Knesset speaker, the Prime Minister and the chief justice.

During the Likud faction meeting, Transportation Minister Miri Regev criticized Rivlin, saying that “it is not surprising that President Rivlin does not want to participate in the traditional photo for Knesset’s opening session.

“He again acts in complete disregard of stately manner and out of ego. Just like when he did not invite the Prime Minister to Independence Day ceremonies at his residence, completely against protocol.”

Netanyahu’s opponents have begun efforts to block him from the premiership, with Yisrael Beytenu filling legislation proposals on term limits for prime ministers and barring an indicted member of the Knesset from serving as prime minister.

During a Yamina faction meeting Tuesday, Bennett said, “Israel now needs two things: The first is the formation of a stable government to save the country from a fifth election and the endless downward spiral of chaos and hate. The second is a government that will reflect more or less the varied opinions in the public, a national consensus, that is – one that leans towards the right wing. I take upon myself the responsibility of forming such a government.”

Yesh Atid head Yair Lapid said on Wednesday that it was a “shame” that Netanyahu received the mandate from Rivlin, but that “this does not mean we will stop working.”

“The goal was and remains the formation of a government of national accord,” he wrote on social media. “The government we will try to form is made up of clearly right-wing, centrist and left-wing parties. This means not everyone is going to get what they want, there must be a balance which will force us to focus on practical objectives.”

Lapid said all sides would get some of what they wished for “but not everything” and this would usher in a “welcome change from Netanyahu’s faulty regime.”