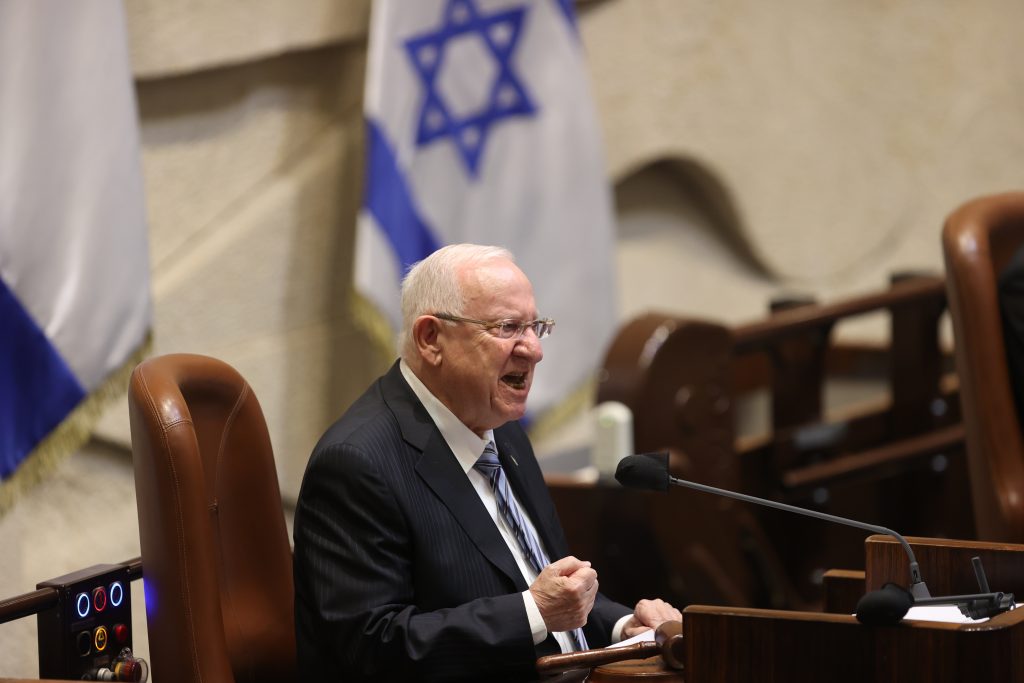 President Reuven Rivlin opened the 24th Knesset on Tuesday with a rebuke and a solemn plea for the bridging of political differences in the interest of national stability.

“Today, I stand before a parliament that has dissolved itself four times in less than two years. A parliament that has relinquished, time after time, the right to express its confidence in the government. The disagreements that divide our society are genuine differences. Many of them are matters of principle. But there are times when we are obliged to resolve even wrenching, tough, painful disagreements,” said Rivlin.

“The Israeli people looks to you and expects each one of you to show leadership. The kind of leadership this moment demands.

“Leadership that is confident in its path, but that sees ideological rivals not as the enemy, heaven forbid, but as potential partners. Leadership that, in the atmosphere of tribalism, knows how to steer away from separatism and alienation, which may be appropriate for the campaign trail, but are destructive when it comes to building a country and leading a people. Leadership of partnership and respect.”

The speech came after Rivlin charged Prime Minister Binyamin Netanyahu‏‏ with the task of forming a new government, while voicing skepticism about his ability to do so under the circumstances, with less than a majority. He also expressed reservations about entrusting Netanyahu, while he is on trial for criminal offenses, though the law does not prevent him from leading a government.

Speaking after Rivlin, Knesset Speaker Yariv Levin of Likud warned that growing distrust of politicians was a “great danger” to the country and “democracy itself.”

“The downsides of democracy are many, including the difficulty to reach an agreement that will enable the long and stable leadership of elected representatives. But democracy has been, and continues to be, a better system than any other,” Levin said.

Democracy “is better than rule of public servants who use their power to thwart government policy,” a likely reference to Attorney General Avichai Mandelblit, who has several times thwarted Netanyahu. “It is better than the rule of the judge who interferes in legislation without authority.”

During the swearing-in ceremony, members of the Arab Joint List changed the standard statement of “I commit,” denoting a commitment to Israel and carrying the duties of an elected representative.

Instead, the MKs stated: “I commit to fighting occupation and apartheid” and similar phrasings.

Amid expressions of anger from other MKs, Levin disqualified the declarations. The MKs will need to give the proper declaration at a later time or be denied some of their rights as MKs.

In a sign of the declining threat of the coronavirus, the swearing-in of the MKs took place without social distancing, unlike last time.