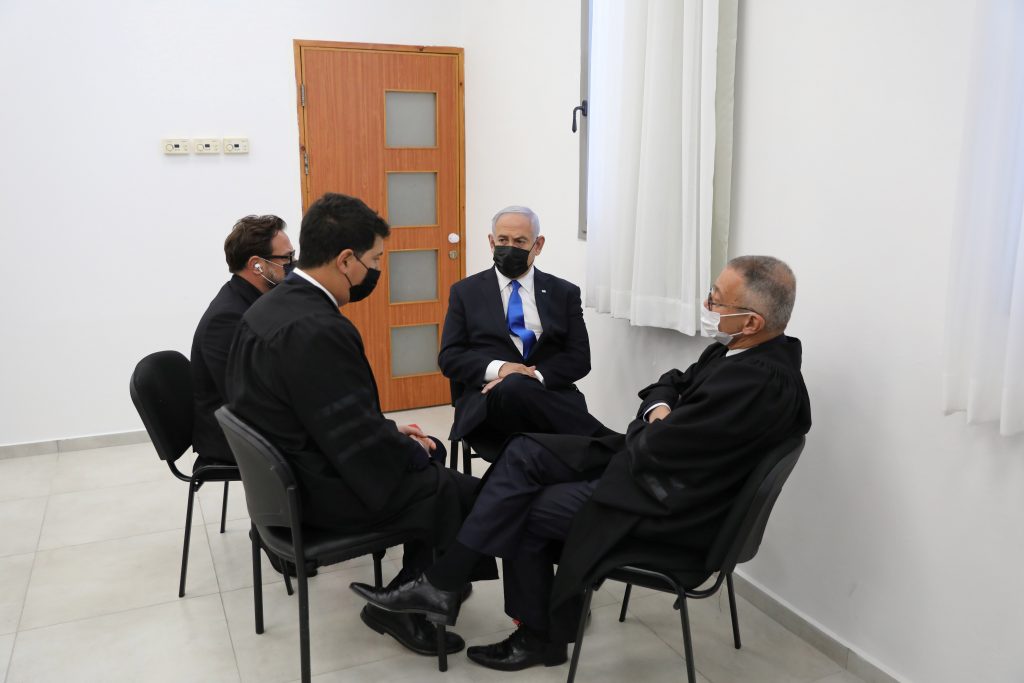 Prime Minister Binyamin Netanyahu arrived at the Yerushalayim District Court Monday morning for the first hearing in the evidentiary phase of his trial.

Supporters gathered outside of the court ahead of his arrival, while a group of anti-Netanyahu protesters also congregated nearby, calling for Netanyahu’s conviction and removal from office.

Businessman Shaul Elovitch, owner of the Bezeq telecommunications company and a codefendant in the Case 4000 trial, also arrived in court Monday.

This is the first time in Israel’s history that a sitting prime minister stands trial. Netanyahu is accused of bribery, fraud and breach of trust in connection with three separate cases. He denies all charges and formally pleaded not guilty to the charges at a hearing in February.

Netanyahu personally attended the opening-statement part of the hearing but left as soon as it was concluded and before Yeshua took the stand.

Netanyahu’s trial has been delayed several times over the past year due to coronavirus-related restrictions, as well as the March elections.

The case is headed by Prosecutors Liat Ben-Ari and Yehudit Tirosh. Representing Netanyahu are attorneys Boaz Ben Tzur and Amit Hadad. The case is being heard before a panel of three judges – Rivka Friedman-Feldman, Moshe Bar-Am and Oded Shaham.

Under Israeli law, a prime minister is under no obligation to stand down unless convicted.

In her opening statement, Ben-Ari said, “Israeli law demands all be equal before it and before the court, regardless of their station in life. This principle… is ingrained in the democratic-legal legacy of this country.

“The case before the honorable court today is a significant and severe case of governmental corruption. The first suspect is the Prime Minister of Israel who, according to the indictment, used his great power in a forbidden way.”