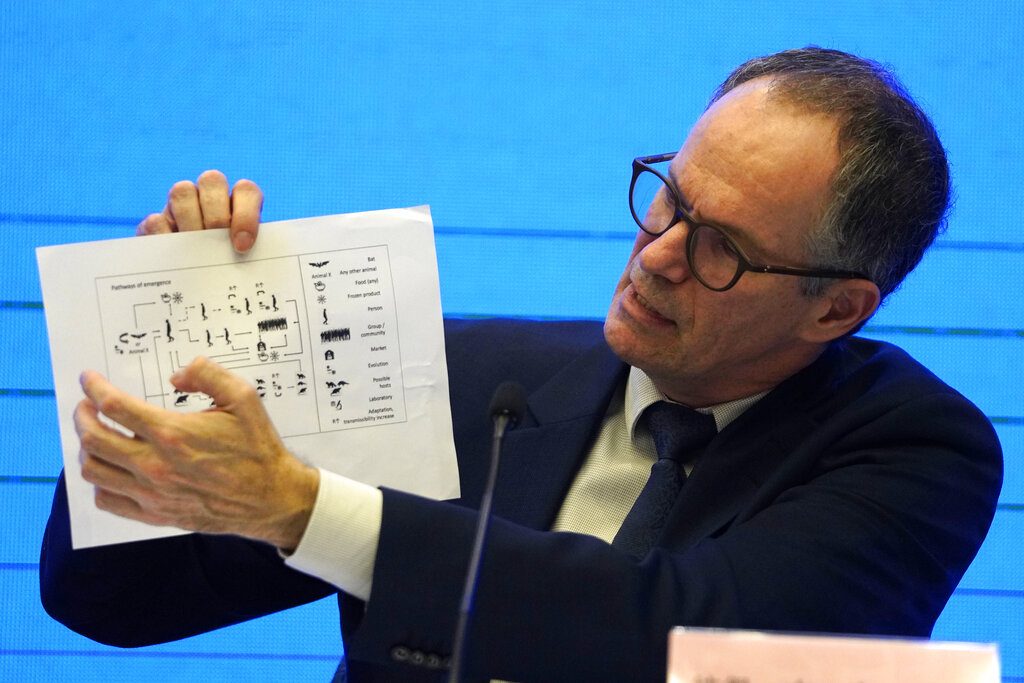 An international team behind a long-awaited study of the possible origins of COVID-19 with Chinese colleagues on Tuesday called it a “first start,” while the United States and allies expressed concerns about the findings and China trumpeted its cooperation.

Team leader Peter Ben Embarek of the World Health Organization presented the team’s first-phase look into the possible origins of the pandemic that has killed nearly 2.8 million people and pummeled economies since it first turned up in China over a year ago.

The report, obtained by The Associated Press on Monday and formally published on Tuesday, said transmission of the virus from bats to humans through another animal is the most likely scenario and that a lab leak is “extremely unlikely.” The WHO chief has said all hypotheses remain open.

After the report’s publication, the U.S. and over a dozen other countries expressed concerns about the study, pointing to delays and a lack of access to samples and data — without finger-pointing at Beijing directly. China responded by reiterating its criticism of efforts to “politicize” the issue.

White House press secretary Jen Psaki said the Biden administration was still reviewing the WHO report, but said “it lacks crucial data, information … It lacks access. It lacks transparency.” She said the study did not rise to the level of the impact that the pandemic has had on the world.

“That’s why we also have called for additional forward-looking steps,” she said in a briefing with reporters. “It doesn’t lead us to any closer (an) understanding or greater knowledge than we had six to nine months ago about the origin.”

Separately, in what it called a joint statement by 14 countries, the State Department said they were calling for “momentum” for a second-phase look by experts and pointed to the need for further animal studies “to find the means of introduction into humans” of the coronavirus.

The countries expressed support for the WHO’s experts and staff, citing their “tireless” work toward ending the pandemic and understanding its origins to help prevent a future one. But they said the study had been “significantly delayed and lacked access to complete, original data and samples.”

Psaki said China has “not been transparent” with the U.N. health agency.

Critics of China’s government in Washington and beyond say it took too long to allow in the team members: Their roughly four-week visit to China in January and February came more than a year after the coronavirus outbreak was first noticed in the city of Wuhan.

Ben Embarek said the team members faced political pressure from “all sides,” but insisted: “We were never pressured to remove critical elements in our report.” He also pointed to “privacy” issues in China that prevented sharing of some data, saying similar restrictions exist in many countries.

Joined by several team members for a news conference, Ben Embarek said that “where we did not have full access to all the raw data we wanted, that has been put as a recommendation for the future studies.”

That was a major theme for the WHO team: More needs to be done, and many questions remain unanswered.

“This is only a first start — we’ve only scratched the surface of this very complex set of studies that need to be conducted,” Ben Embarek said. “We have pointed to many additional studies that should be conducted from now on.”

“This is a work in progress,” he added, “and we all have to be patient.”

Ben Embarek said it was difficult to know when — if at all — the precise origin of the pandemic will come to light. While the team members believe one hypothesis that the virus could have leaked from a laboratory was not likely, it was “not impossible” either, he said.

“We haven’t seen or been able to hear or see or look at anything that would warrant different conclusions from our side,” he said.