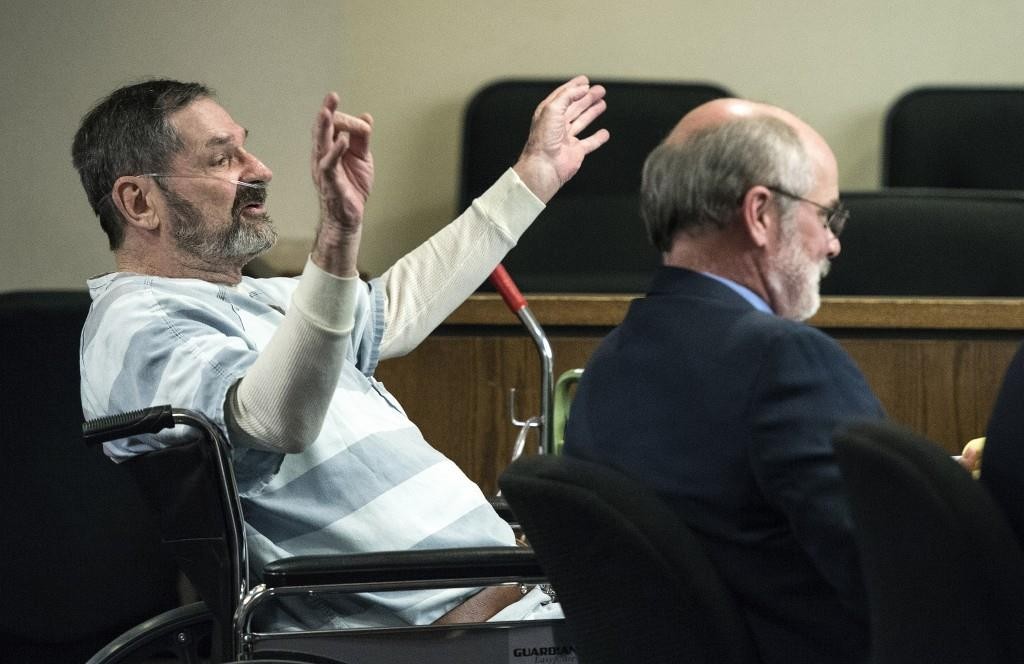 The death sentence of an avowed anti-Semite who fatally shot three people at two suburban Kansas City Jewish sites in 2014 should be overturned because he was incapable of understanding the legal intricacies when he represented himself at trial and during sentencing, his attorney said Monday.

Attorney Reid Nelson also argued before the Kansas Supreme Court that Frazier Glenn Miller Jr.’s sentence should be overturned because the state’s death penalty law is unconstitutionally vague. He said Miller’s standby attorneys should have been allowed to intervene during the penalty phase.

Miller was convicted in August 2015 on one count of capital murder, three counts of attempted murder, and assault and weapons charges.

Attorneys also argued in an afternoon session over whether the state’s death penalty law itself is unconstitutional.

Nelson admitted Miller presented the case he wanted to, but said his standby attorneys were better trained to present evidence to the jury in the penalty phase about Miller’s difficult life, mental health issues and other factors that might have prompted the shootings.

“It is absolutely required that these proceedings have a heightened standard of reliability, which this case didn’t have,” Nelson said, adding that no defendant representing himself at sentencing in a capital murder case is ever capable.

Miller frequently interrupted court proceedings and, after he was convicted, he said he didn’t care if he was sentenced to death.

Johnson County District Attorney Steve Howe, who prosecuted Miller, argued Monday that the U.S. Constitution allows defendants to serve as their own lawyers and that trumps any legal argument over whether they are able to represent themselves.

“I go back to the fact that this is his right to have the trial the way he wants the trial, and the lawyers can’t tell him what to do,” Howe said. “He made that abundantly clear and, as far as I’m concerned, the Sixth Amendment says, whether its a good idea or not, you have a right to be your own lawyer.”

He also argued that Miller’s outbursts and actions during court proceedings did not prove he had mental health issues. Howe noted that Miller methodically planned the killings and was able to participate in all aspects of the trial.

He said Miller used the court proceedings to present his anti-Semitic and racist views, and that prosecutors and the judge “went the extra mile” by explaining the legal process as well as accommodating Miller’s desire to talk about his beliefs.

Nelson also argued that the state’s death penalty law is so broad that any first-degree, premeditated murder could be subject to the death penalty. He said a clause that allows juries to consider whether any action is “especially henious” is unconstitutionally vague and needs to be changed to limit juries’ discretion.

Howe responded that Kansas law has specific factors that would not allow every murder to be considered a death penalty case, and allows juries to consider motivations, intent and conduct to determine state of mind in such cases.

“Kansas, as I think everyone would agree, is very limited on when you can meet capital murder,” Howe said. “… I do think Kansas has constructed this in a way that it’s clear what the Legislature’s intent was and that things like conduct, intent and motive were all things they contemplated as things for the juries to consider in a death penalty case.”

On Wednesday afternoon, Meryl Carver-Allmond, an attorney for Miller, argued the death penalty is unconstitutional and violates “the fundamental right to life” under Kansas’ Bill of Rights.

The argument comes after an April 2019 state Supreme Court ruling that protected abortion rights. The justices ruled language protecting “equal and inalienable rights” in the Kansas Constitution’s Bill of Rights includes the right to personal autonomy and to control one’s own body.

After the ruling, attorneys for Miller and other death row inmates argued executing prisoners violates their “inalienable” right to life.

Carver-Allmond said she was not arguing the death penalty should be banned forever in Kansas. Instead, she said, the law should be more narrowly tailored and, under the 2019 ruling, Miller should be resentenced to life without parole.

Brant Laue, solicitor general of Kansas, argued for the state that the 2019 ruling has no effect on death penalty being constitutional in Kansas under the Bill of Rights. He said Miller moved outside private autonomy when he committed multiple murders and the state Constitution does not prevent the Kansas from executing him.

Miller, testified during trial that he drove to the Kansas City area in April 2014 to kill Jews and that he didn’t expect to live long because he had chronic emphysema.

He ambushed and killed William Corporon, 69, and Corporon’s 14-year-old grandson, Reat Griffin Underwood, at the Jewish Community Center in Overland Park, Kansas. He then shot 53-year-old Terri LaManno at the nearby Village Shalom retirement center.

All of his victims were Christians.

In his closing arguments during the penalty phase, Miller spent nearly an hour complaining that Jewish people were running the government, media and Federal Reserve. He yelled “Heil Hitler” when he was sentenced to death.

Miller is a Vietnam War veteran who founded the Carolina Knights of the Ku Klux Klan in his native North Carolina and later the White Patriot Party. He also ran on a white-power platform during campaigns for the U.S. House in 2006 and the U.S. Senate in 2010 in Missouri.