How Did a Ship Get Stuck in the Suez Canal?

One of the largest ships at sea is stranded sideways in one of the world’s key shipping canals, blocking millions of dollars in trade as frantic efforts to refloat it unfold.

Since Tuesday, the Japanese-owned Ever Given cargo ship, operated by a Taiwanese company, Evergreen Marine, has been wedged at an angle in Egypt’s Suez Canal.

The trapped 200,000-ton vessel — stuck in a position one industry expert compared to that of an “enormous beached whale” — has caused a traffic jam of cargo ships waiting to make it through, with ripples felt across world trade.

Q: What is the Suez Canal, and who controls it?

A: The Suez Canal is a man-made waterway linking the Red and Mediterranean Seas. It belongs to Egypt. 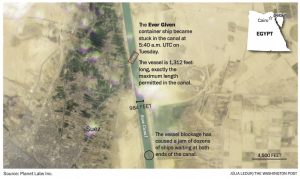 When it opened in 1869, the canal increased the ease of global trade by offering a route that circumvented the need to round the horn of Africa. It’s since remained crucial to international trade, including for the oil sector.

In 1956, Israel, Britain, and France invaded Egypt in an attempt to seize control of the strategic waterway after the country nationalized it. Their forces later withdrew.

In 2015, Egypt launched a major and costly renovation of the canal. By some estimates, 12% of global trade now passes through it.

Q: How did the vessel get stuck?

On Tuesday, a sandstorm reportedly hit the more than 1,300-foot Ever Given, decreasing visibility and battering the ship with heavy winds. That disruption caused the ship to become wedged sideways across the canal.

The exact details of, and science behind, what happened are still to be determined. In the heavy winds, for example, the ship’s cargo could have formed a sail-like effect, propelling it off course.

The vessel is just at the maximum length permitted for a ship to use the canal, so it also has very little wiggle room. It is, for comparison, larger than the Eiffel Tower.

The 25-members of the crew are all reportedly safe. Workers on these kinds of ships typically spend months at a time at sea.

Q: What’s being done to get it out?

A: For several days, tugboats have been working away to dig around and pull out the most wedged part of the ship. There’s been some movement, but it’s a slow and massive project that could drag on for days, or even longer. Teams of specialists from places like the Netherlands are flying in to help.

As part of the process, the ship will likely have to be made lighter. That could mean removing some of its fuel — or some of its cargo, which would be even more time consuming, Bloomberg News reported. For the latter approach, specific equipment would have to be flown in.

“It is not really possible to pull it loose,” said Peter Berdowski, CEO of dredging company Boskalis, who had compared it to a whale. He predicted it could be weeks before the ship is fully dislodged.

Q: How has the incident affected international trade?

A: The longer the Suez Canal remains blocked, or partially blocked, the more painful the financial repercussions are expected to be. Oil prices rose Wednesday due to fears over deepening disruptions in global trade, before falling again. 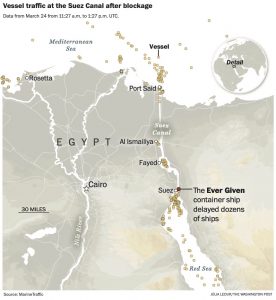 There’s a backlog of some 237 ships left waiting, which could be carrying anything from live animals to natural gas, according to Bloomberg. On Tuesday, after the ordeal began, there were only around 100 ships waiting in line. Wednesday the number rose to around 185.

In the meantime, Egypt has opened up an alternative, though smaller, area of the canal. Lloyd’s List, a shipping journal, estimated that each day the canal is closed some $9 billion worth of goods are affected, the Associated Press reported. Delays at the canal will impact unloading schedules at other ports and docks, which can delay goods en route to producers, suppliers and consumers.

“We are determined to keep on working hard to resolve this situation as soon as possible,” the ship’s Japanese owner, Shoei Kisen Kaisha Ltd, wrote in a statement Thursday. “We would like to apologize to all parties affected by this incident, including the ships travelling and planning to travel through Suez Canal.”

Q: Has this happened before?

A: Most recently, in 2017, a Japanese vessel carrying containers became blocked in the canal after it had a mechanical issue. But tugboats and Egyptian authorities were able to kickstart the ship within a couple of hours.