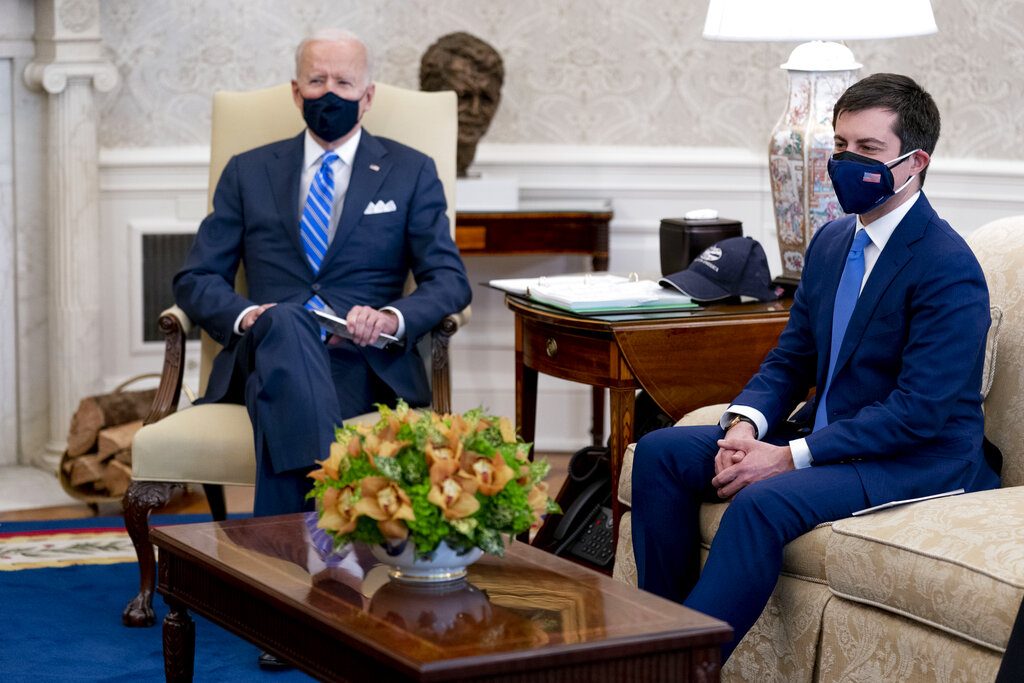 Transportation Secretary Pete Buttigieg is warning that the country’s infrastructure needs exceed $1 trillion and that other countries, namely China, are pulling ahead of the U.S. with their public works investments, a scenario he describes as “a threat to our collective future.”

Buttigieg is set to appear before a House panel Thursday, part of an opening gambit to sell Congress on President Joe Biden’s infrastructure plan. Congress just passed a $1.9 trillion COVID-19 relief bill, but Buttigieg is expected to tell lawmakers that a broader economic recovery will require a national commitment to fix and transform America’s infrastructure.

He calls the coming months “the best chance in any of our lifetimes to make a generational investment in infrastructure,” according to prepared remarks obtained by The Associated Press.

“Across the country, we face a trillion-dollar backlog of needed repairs and improvements, with hundreds of billions of dollars in good projects already in the pipeline,” he says.

Buttigieg was set to address the House Transportation and Infrastructure Committee as Biden meets with economic advisers this week on an emerging $3 trillion package of investments on infrastructure and domestic needs. In recent weeks, Buttigieg has met over two dozen groups and over three dozen members of Congress, according to agency records, to discuss the effort he casts as a “generational” opportunity.

But that sales pitch is facing skepticism from Republicans wary of another pricey package so soon after the multitrillion-dollar COVID-19 response. For Biden, it’s yet another test of his campaign promise to reach across the political aisle when addressing national problems, with some Democrats favoring a go-it-alone approach that could cut Republicans out of the process.

The proposal, which remains preliminary, would break legislation on the priorities into different pieces, including an infrastructure component to boost roads, bridges, rail lines, electrical vehicle charging stations and the cellular network, among other items, in a bid to attract Republican support. The goal would be to facilitate the shift to cleaner energy.

A second component would include investments in workers with free community college, universal pre-kindergarten and paid family leave, according to a person familiar with the options who insisted on anonymity to discuss private conversations.

Still, Republicans in the closely divided Congress are already balking at the size and scope of the proposal as well as Biden’s focus on the environment. Some Democrats have privately told the administration that they will likely have to bypass Republicans and use their narrow party majorities in the House and Senate to pass infrastructure plans with budget reconciliation, which requires only a simple majority.

Biden is expected to provide details on his economic proposals in a speech next week.

Buttigieg, a Democratic presidential candidate in 2020 who was the mayor of South Bend, Indiana, is echoing Biden’s call to pass a bill with bipartisan support, stressing both economic and racial justice needs.

He says nearly 40,000 Americans die on unsafe or inadequate roads annually, while millions others don’t have access to affordable transportation. The current pandemic has only stressed the transportation sector even more, he says, and “without action, it will only get worse.”

“We see other countries pulling ahead of us, with consequences for strategic and economic competition,” Buttigieg says in prepared remarks. “By some measures, China spends more on infrastructure every year than the U.S. and Europe combined. The infrastructure status quo is a threat to our collective future.”