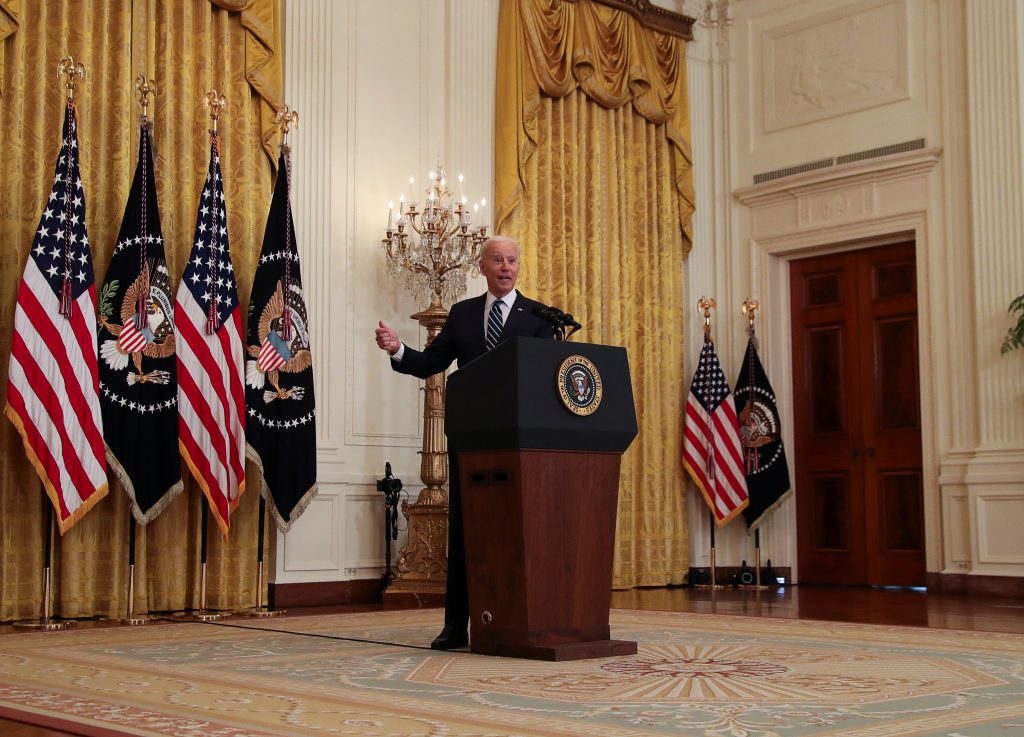 President Joe Biden on Thursday set a new goal of 200 million vaccine shots in his first 100 days in office because the nation is on track to meet that benchmark. Biden made the announcement at the start of his first formal news conference as president at the White House, where he said he plans to seek reelection in 2024 and answered questions on his handling of immigration, the filibuster, Afghanistan and North Korea.

Biden opened his news conference by announcing that he would double his goal of administering 100 million coronavirus vaccination shots to Americans by his 100th day in office.

Biden called the goal “ambitious,” but the United States is already on pace to meet it.

The country has been averaging about 2.5 million doses a day in the past week, according to the Centers for Disease Control and Prevention. At that pace, the nation would hit Biden’s goal before April 30, his 100th day.

Biden noted that he set his original goal on Dec. 8, before taking office.

“We met that goal last week,” he said.

Earlier Thursday, the White House announced that it is committing nearly $10 billion to address inequities in vaccine coverage based on race, income and geography, a problem that has bedeviled health officials overseeing the coronavirus-immunization effort.

At his news conference, the president offered a preview of the case he’ll make for his administration’s next major legislative initiative, a massive infrastructure package that he plans to detail at an event next week in Pittsburgh.

“The next major initiative . . . is to rebuild the infrastructure, both physical and technological infrastructure of this country, so that we can compete and create significant numbers of really good-paying jobs,” he said.

Biden said that Republicans used to put a priority on building roads, bridges and other forms of infrastructure and lamented that the United States now lags many countries, including China, in the investment it makes.

“I still think the majority of the American people don’t like the fact that we now rank . . . 85th in the world in infrastructure,” he said. “I mean, look, the future rests on whether or not we have the best airports that can accommodate air travel, ports that you can get out of quickly. . . . So there’s so much we can do.”

In regards to China’s human-rights violations, Biden said his administration would “insist that China play by the international rules.”

He described Chinese President Xi Jinping as “a smart, smart guy” who “doesn’t have a democratic — with a small “D” — bone in his body.”

“He’s one of the guys like Putin who thinks that autocracy is the wave of the future,” Biden said.

In their first phone conversation as heads of state, Biden said he and Xi spoke for two hours and that he emphasized that the United States was not looking for confrontation, “although we know there will be steep, steep competition.”

Biden also said the United States would need investments in American workers and science to compete with China effectively.

“But (the U.S.) will insist that China play by the international rules, fair competition, fair practices, fair trade,” he said.

The president noted that he had recently met with the heads of the other “Quad countries” — Australia, India and Japan — to discuss how to hold China accountable in the region.

“We have to have democracies working together,” he said. “We’re going to make it clear that in order to deal with these things, we are going to hold China accountable, to follow the rules, whether it relates to the South China Sea, the North China Sea or the agreement made on Taiwan or a whole range of other things.”

Biden said he made clear to Xi that Americans value human rights and would continue to call out China’s human-riots violations, specifically citing the persecution of the Uyghurs in China’s Xinjiang region and in the erosion of democracy in Hong Kong.

“The moment the president walks away from that (commitment to human rights), as the last one did, is the moment we began to lose our legitimacy around the world,” Biden said. “It’s who we are.”

Another foreign-policy topic Biden discussed was North Korea, which over the weekend fired short-range missiles in what was seen as a test of the new U.S. administration. Biden said the United States will “respond” to the launch if North Korea escalates its threats.

But the president also said he’s “prepared” to have talks with North Korea.

“I’m also prepared for some form of diplomacy, but it has to be conditioned upon the end result of denuclearization,” he said. “So that’s what we’re doing right now.”

Biden said he agreed with President Barack Obama’s assessment four years ago that North Korea was the No. 1 foreign policy issue for the United States.

Another holdover from prior administrations — the Afghan War — came up during Thursday’s news conference.

Biden said it would be hard for the United States to meet a May 1 deadline to withdraw all U.S. forces from Afghanistan, but he stressed that it “is not my intention to stay there for a long time” and that he “can’t picture” troops still being there in a year.

“The answer is that it’s going to be hard to meet the May 1 deadline in terms of tactical reasons, hard to get those troops out,” he said in response to a question about whether the May 1 goal set by the Trump administration would be met.

“If we leave, we’re going to do so in a safe and orderly way,” Biden said. “We’re in consultation . . . with our allies and partners and how to proceed.”

The administration had already signaled that it would probably miss the deadline, raising questions about the size and makeup of a lingering U.S. military presence.

Much of the administration’s North American focus is on the U.S.-Mexico border, according to the president.

Biden was asked at Thursday’s news conference about his administration’s policy toward unaccompanied minors entering the United States by crossing the border. He dismissed the notion that his administration’s messaging is encouraging families to send their children alone on the dangerous journey to the United States, but also suggested that he will not shift to a harder line on the issue.

Biden noted his decision to assign Vice President Kamala Harris to the issue, focusing on addressing the fundamental reasons for migration from Central and South America.

Meanwhile, when asked if he plans to run for reelection in 2024, the president replied, “That’s my expectation.”

Biden, 78, was the oldest to assume the presidency when he was sworn in on Jan. 20, prompting questions of whether he would elect to not run for a second term. During the campaign and the transition, Biden surrogates have suggested that he would run again.

Thursday’s answer came in response to a reporter who noted that former president Trump had signaled that he might seek the presidency in 2024. “Oh, G-d, I miss him,” Biden joked.

Biden said that he expects Harris to be on his ticket — “She’s a great partner” — and that he has no idea who will be on the Republican ticket in 2024. “I have no idea whether there will be a Republican Party. Do you?”

He criticized efforts by Republican-led state legislatures across the country to restrict voting rights, saying he was worried about “how un-American this whole initiative is.”

“It’s sick. It’s sick,” Biden said vehemently, citing examples of some states proposing restrictions on bringing water to people standing in line waiting to vote, or to prohibit absentee ballots even under the most rigid of circumstances.

“I’m convinced that we’ll be able to stop this because it is the most pernicious thing. This makes Jim Crow look like Jim Eagle,” Biden said, emphasizing that he would do “everything in my power” to pass legislation to protect voting rights. He said he agrees with former president Barack Obama that the Senate filibuster is a “relic” of the Jim Crow era but said he is not seeking to abolish it altogether because “politics is the art of the possible.”

Biden has advocated for making changes to the rule to require senators to remain on the floor while pressing a filibuster, which requires 60 votes to break, but he has stopped short of calling for its abolition.

Several Democratic senators have said they would not support abolishing the filibuster outright, making such a move unlikely in the short term.