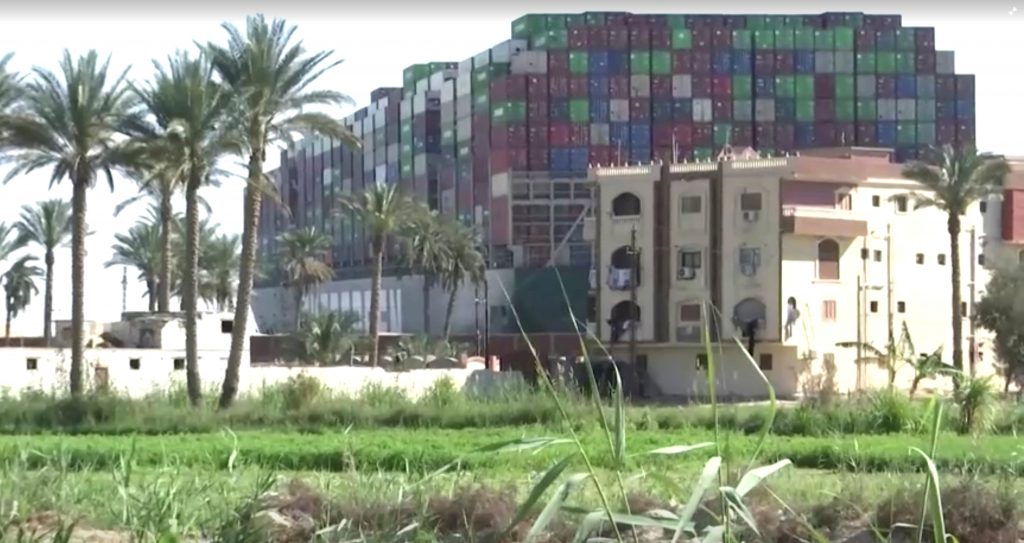 A container ship blocking the Suez Canal like a “beached whale” may take weeks to free, the salvage company said, as officials stopped all ships entering the channel on Thursday in a new setback for global trade.

The 400 m (430 yard) Ever Given, almost as long as the Empire State Building is high, is blocking transit in both directions through one of the world’s busiest shipping channels for oil and grain and other trade linking Asia and Europe.

The Suez Canal Authority (SCA) said eight tugs were working to move the vessel, which got stuck diagonally across the single-lane southern stretch of the canal on Tuesday morning amid high winds and a dust storm.

“We can’t exclude it might take weeks, depending on the situation,” Peter Berdowski, CEO of Dutch company Boskalis which is trying to free the ship, told the Dutch television programme “Nieuwsuur”.

A total of 206 large container ships, tankers carrying oil and gas, and bulk vessels hauling grain have backed up at either end of the canal, according to tracking data, creating one of the worst shipping jams seen for years.

The blockage comes on top of the disruption to world trade already caused in the past year by COVID-19, with trade volumes hit by high rates of ship cancellations, shortages of containers and slower handling speeds at ports.

The SCA, which had allowed some vessels to enter the canal in the hope the blockage could be cleared, said it had temporarily suspended all traffic on Thursday. Shipping giant Maersk said in a customer advisory it had seven vessels affected.

Berdowski said the ship’s bow and stern had been lifted up against either side of the canal.

“It is like an enormous beached whale. It’s an enormous weight on the sand. We might have to work with a combination of reducing the weight by removing containers, oil and water from the ship, tug boats and dredging of sand.”

Dredgers were working to clear sand and mud from around it while tugboats in conjunction with Ever Given’s winches work to shift it, the vessel’s technical manager, Bernhard Schulte Shipmanagement (BSM), said.

Another official with knowledge of the operation said that was likely to take days. “If you end up in the scenario that you have to remove cargo then you are looking at a time consuming exercise,” he said, declining to be named.

Roughly 30% of the world’s shipping container volume transits through the 193 km (120 miles) Suez Canal daily, and about 12% of total global trade of all goods.

Shipping experts say that if the blockage is not cleared in the coming days, some shipping may re-route around Africa, which would add roughly a week to the journey.

“Every port in Western Europe is going to feel this,” Leon Willems, a spokesman for Rotterdam Port, Europe’s largest, said. “We hope for both companies and consumers that it will be resolved soon. When these ships do arrive in Europe, there will inevitably be longer waiting times.”

Consultancy Wood Mackenzie said the biggest impact was on container shipping, but there were also a total of 16 laden crude and product oil tankers due to sail through the canal and now delayed.

Russia and Saudi Arabia are the top two exporters of oil through the canal, while India and China are the main importers, oil analytics firm Vortexa said. Consultancy Kpler said the canal accounted for only 4.4% of total oil flows but a prolonged disruption would complicate flows of Russian and Caspian oil to Asia and oil from the Middle East into Europe.

About 16% of Germany’s chemicals imports arrive by ship via the Suez canal and the chief economist for the association of German chemicals and pharmaceuticals producers VCI, Henrik Meincke, said they would be affected with every day of blockage.

Japanese shipowner Shoei Kisen apologised for the incident and said work on freeing the ship, which was heading to Europe from China, “has been extremely difficult” and it was not clear when the vessel would float again.

The owner and insurers face claims totalling millions of dollars even if the ship is refloated quickly, industry sources said on Wednesday. Shoei Kisen said the hull insurer of the group is MS&AD Insurance Group while the liability insurer is UK P&I Club.

The ship’s GPS signal shows only minor changes to its position over the past 24 hours.

Two professional rescue teams from the Netherlands and Japan will work with local authorities to design a more effective plan to refloat the vessel, the company leasing it, Taiwan’s Evergreen Marine Corp said.