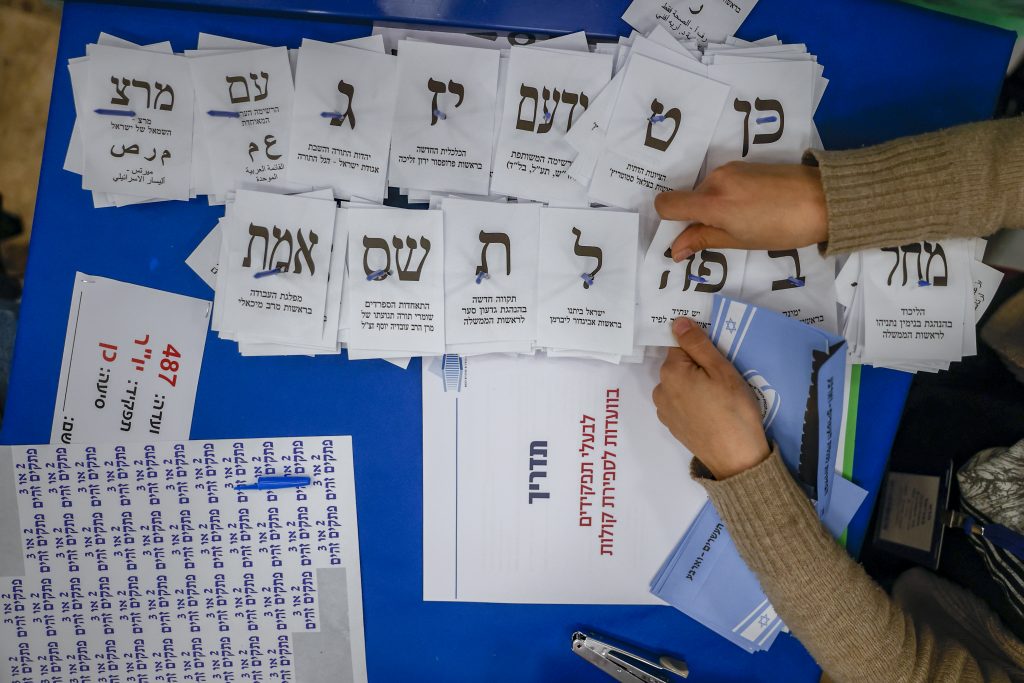 Election officials continued counting absentee ballots on Thursday morning, with results still showing no clear path to a majority coalition for either Prime Minister Binyamin Netanyahu’s bloc or his opponents.

The Central Elections Committee counted some 46,000 ballots overnight Wednesday that slightly shifted the electoral makeup, with the Ra’am party losing a seat to Meretz.

Around 425,000 absentee votes remained, along with 55 ballot boxes from normal polling stations.

As of Thursday morning, over four million votes had been counted, amounting to 91.6% percent of all ballots cast in Tuesday’s election. The Central Elections Committee said it expects to finish the vote count on Friday morning.

The remaining absentee ballots account for some 10% of the national vote, and could yet determine whether Netanyahu is able to form a new government, whether his rivals can, or whether the political gridlock continues and Israel heads to yet another election.

The prospect of a governing coalition appeared to hinge on the Ra’am party, which has not committed to either the pro- or anti-Netanyahu blocs.

In his bloc of supporters, Shas would win nine seats, United Torah Judaism seven, and Religious Zionism six. The sum would give Netanyahu’s bloc 52 seats, short of a 61-seat majority, even with the potential support of Naftali Bennett’s Yamina faction, with seven.

In the bloc of parties opposed to Netanyahu, Yair Lapid’s Yesh Atid party was projected to be the largest party with 17 seats, followed by Benny Gantz’s Blue and White, with eight.

Together with Labor – six, Yisrael Beytenu – seven, the Joint List – six, Gideon Sa’ar’s New Hope – six – and Meretz – six, the bloc would have 57 seats. It remains unclear who would lead a prospective anti-Netanyahu coalition, as Sa’ar and Bennett have both said they will not sit in a coalition led by Lapid.