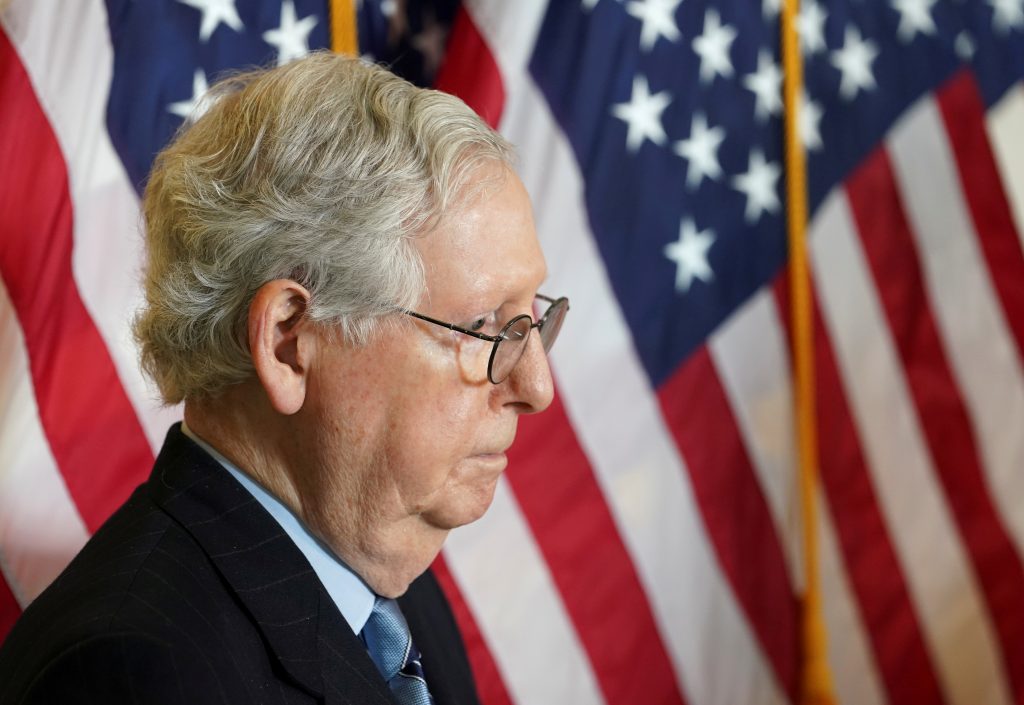 The top Republican in the U.S. Senate on Wednesday blasted a sweeping election reform bill passed by the Democrat-led House of Representatives earlier this month as a “partisan power grab.”

Democrats say the bill, which updates voting procedures and requires states to turn over the redrawing of congressional district lines to independent commissions, is needed to overcome Republican efforts to make voting across the country harder.

“This is clearly an effort by one party to rewrite the rules of the political system,” Senate Republican Leader Mitch McConnell said at the start of a rules committee hearing. “We should be finding ways to rebuild trust, not destroy it further. That’s exactly what a partisan power grab would guarantee.”

Many Republican-controlled state legislatures are exploring steps that voting-rights advocates say would reduce turnout after record-setting participation in the November 2020 general election.

One of the losers in November was former President Donald Trump, who falsely claimed that his defeat was the result of widespread voter fraud. Courts largely rejected the claims and state and federal reviews found no evidence to support them.

The House-passed bill faces an uphill battle in the 50-50 Senate, where Democrats hold the majority by virtue of Democratic Vice President Kamala Harris’ tie-breaking vote, but most legislation needs 60 votes to pass.

With Republicans vowing to fight the bill, some Senate Democrats argue that it is time to eliminate or pare back the 60-vote rule – known as the filibuster – to allow legislation to pass with a simple majority, as it is in the House.

One independent senator who caucuses with Democrats, Angus King of Maine, signaled on Wednesday that he would back changing the filibuster if Republicans block the voting rights legislation.

“All-out opposition to reasonable voting rights protections cannot be enabled by the filibuster,” King wrote in the Washington Post. “If forced to choose between a Senate rule and democracy itself, I know where I will come down.”

But other Democrats, including Senator Joe Manchin of West Virginia, say they oppose changing the filibuster rule. Manchin is also the only Senate Democrat who has not co-sponsored the election reform bill. He told CNN on Wednesday he wanted to see changes before he can support it.

Senate Republicans said they were ready to filibuster the bill, which they say would “federalize” elections instead of leaving them to states and localities.

“There is no amount of time that I will not dedicate on the Senate floor to stop the Democrats from passing this kind of radical legislation,” said Senator Tom Cotton.

But Senate Majority Leader Chuck Schumer said Republican efforts to restrict voting smacked of “Jim Crow” era laws adopted by some states designed to disenfranchise blacks, which remained on the books until the mid-20th century.

One proposal currently under consideration in Arizona would require every absentee ballot to be notarized, putting the poor at a disadvantage, he said. Another in Georgia would eliminate early voting on Sunday, when many African-Americans traditionally cast their ballots.

“Instead of doing what they should be doing when you lose an election in a democracy – attempting to win over those voters in the next election – Republicans instead are trying to disenfranchise those voters,” Schumer said.