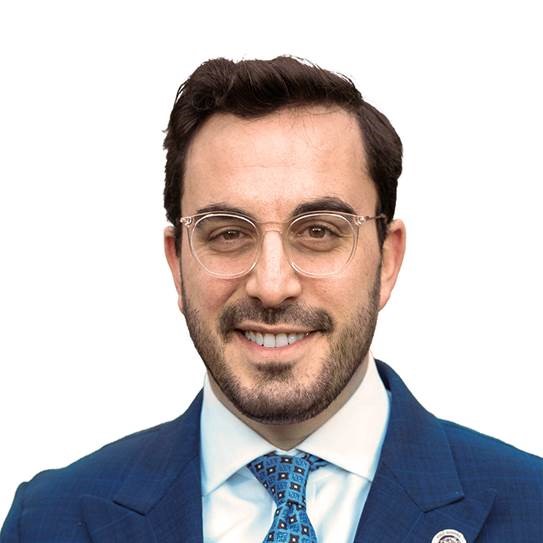 It was the pandemic that prompted Avi Cyperstein to declare his candidacy for 29th City Council District for the 2021 election.

Cyperstein, a community activist and volunteer first responder, found there was a distance between what coronavirus rules the politicians were dictating and what he was seeing everyday.

“I found myself in the middle of this COVID pandemic in Queens which, at one point was considered the epicenter,” Cyperstein told Hamodia in a virtual interview after a long day of canvassing. “[Our] protocols are changing every single day … not based necessarily on the medical necessity or what would be for the benefit of the patient” but what the leadership of New York City had chosen.

In his criticisms of the coronavirus that prompted him to run, he speaks from personal and professional experience. He is the founder of a medical billing company, has worked in elder care, and has been a volunteer EMT and leader of Chaveirim of Queens for several years.

Frustrated by the lacking leadership, Cyperstein realized the upcoming City Council election was an unprecedented opportunity to help New York City recover from the coronavirus crisis and to have his section of Queens be represented by someone from his community for the first time, rather than a candidate whose social beliefs to do not align with the community’s values.

“When I realized who was entering the race I realized that, number one, was going to be in trouble because if you want to look at it from the Jewish community’s perspective, our needs are not going to be met and we do make up a large part of the district,” Cyperstein said. “Many of the programs that the radical left might vouch for or push for or advocate for don’t necessarily take care of the needs of the everyday Queens citizen.”

Cyperstein threw himself into the race for City Council District 29. He ran voter registration drives urging people to vote as Democrats in order to make a difference in local elections, and went door to door, double-masked, introducing himself to the communities of Kew Gardens, Forest Hills, Rego Park and Richmond Hill.

On March 15, his campaign qualified for maximum matching funds from the city’s campaign finance boards, achieving a major threshold in the race.

Though Cyperstein is a first time candidate, he is no stranger to politics. His father, Aaron Cyperstein, worked for the Queens district attorney and the Queens Borough President for many years, and Cyperstein grew up with local politicians coming to his home to discuss issues. From there, Cyperstein was taught the importance “of staying connected to local politicians … because that’s how you get things done for your community,” he told Hamodia.

Cyperstein continued building those relationships as an adult. In his capacity as the founder of Chaverim of Queens, Cyperstein made sure he had relationships with elected officials, to “let them know about what our community stands for and how they can be helpful to our community,” he said.

What he found his community wants overall is a sense of safety and security that has been in short supply over the past year.

To combat the rise in violence and sense of danger on the streets, Cyperstein says the issue ought to be tackled in two directions. Firstly, by restoring autonomy and control to the police, and secondly, by funding mental health programs.

“People in my district are pretty moderate. They believe in safety and security,” he said. “They don’t want to defund the police. [They] make sure that our neighborhoods are safe.”

He added that the hostility the police face only fosters discouragement among officers at a time when they are needed more than ever. Many officers feel they cannot do their job properly out of fear of committing an infraction.

“Right now, in many cases, the police have their hands tied. So, it almost gives a free rein to people that want to make trouble,” he warned.

Cyperstein is staunchly opposed to progressive policies that redirect funding from the police towards other programs. Instead, he sees promise in education programs that can train officers how to respond to and de-escalate situations that could potentially turn violent.

He is encouraged by a new police scanner system in which police are being informed, when heading to a call, that someone who is acting erratically or even violently is not necessarily seeking to attack them but is having a mental health crisis.

“Officers, when they’re being educated, they’re getting the right approach … It gives them the confidence to do their job,” Cyperstein said, referring to an increased awareness of the mental health crisis plaguing the city.

Many of those people contributing to the pervasive sense of lack of safety on the streets are homeless, part of a growing crisis in Queens and the city at large. Cyperstein has personal experience with that population; his first job was managing Section 8 and shelter apartments. He saw firsthand how many of those whose lives were devastated by severe mental illness were unable to hold down a job or take care of themselves.

Cyperstein realized if the city wants more than temporary fixes, they need to invest in a thorough system of programs and services to help people gain control over their mental health challenges and keep the streets and subways safer for all New Yorkers.

“It’s imperative to not just create proper housing for the homeless people,” he said. “Where’s this person really, really struggling? With a mental health crisis. He needs to be in a facility or medicated.”

“We’re on the beginning of a mental health crisis. We’re gonna start seeing the results of it in the years to come,” Cyperstein warned, noting the pandemic has exacerbated existing trends. “There’s just a lot more people that are struggling with mental health or maintaining their place in society … If we don’t already have a mental health crisis, we’re definitely leaning in the direction of a major [one].”

To prepare for those who need help, Cyperstein is in favor of expanding and strengthening pre-existing city programs and systems such as ThriveNYC, but with major caveats.

“If we’re going to allocate money for it, it should be with major oversight. Where’s the money going? How’s the money being spent? And how are we accounting for it?” he said, calling for a thorough auditing of how funds are being allocated and spent.

Cyperstein is adamantly opposed to raising taxes on high-income earners, saying, “I am not in favor of increasing any taxes on anyone at this time, no matter who you are. Right now the last thing anybody wants to be doing is paying more taxes. Everybody’s struggling.”

Instead, he would cut down on bloated public programs and utilize the money that would otherwise be wasted to invest in necessary projects.

“Make sure that it’s being spent the right way,” Cyperstein told Hamodia. “I’m going to go look into the books and figure out where that money is being wasted when it could be spent elsewhere. There’s no reason why New York City can’t be held just as accountable when dealing with taxpayers’ money … We should be able to be able to find enough money to cover a lot of the programming. That will help New York City residents and small businesses get back on their feet.”

If the city is able to reallocate its funds towards more worthwhile causes, one of the first Cyperstein would want the Council to prioritize is a cause he is professionally and personally familiar with: serving the elderly, a demographic the pandemic has exposed as being extremely vulnerable and overlooked by political leaders.

“I have a very strong connection to the geriatric community. I’ve worked with seniors for over a decade, providing them with home health care, services, [and] medical supplies,” he said. Over the years, he realized that if seniors had access to programs that would allow them to live at home and independently as possible, “they’re much more likely to thrive.”

The policies put in place at the beginning of the pandemic horrified him. He gathered several friends who worked in or owned nursing homes to try and formulate a plan, paying out of their own pockets, to safely isolate the infected from the healthy and provide them all with medical care in hotels. They were rebuffed.

“This really hit home, and these are stories that really touched me,” Cyperstein said, pointing out how programs such as Medicare and Medicaid have been pared down over the years at the expense of providing services and home aides for the elderly.

“If we’re able to identify where money in New York City is being wasted,” he elaborated, “I believe that those are areas where it can really benefit … mental health, affordable health care, if someone wants to have a private plan that gives them more access … then, in fact, we will be able to provide more services to more people. There’s no reason why we shouldn’t, that’s why it’s being spent.”

Cyperstein’s focus on sensible spending for public services extends to his broader plan for economic recovery, which would expand grant programs to small businesses and do away with the endless red tape that can overwhelm struggling entrepreneurs.

“Even though the city has this grant program in place, it’s not really kept up. There’s no one held responsible to make sure that those contracts are actually being executed,” Cyperstein said, based on his research into the economic programs meant to help small and local businesses. But the endless paperwork, for which a small business “cannot afford the kind of personnel or the legal department necessary to fill out all that paperwork or to meet the minimum standards,” impedes progress, and the “contract goes elsewhere.” To empower them to be able to register and execute these contracts, Cyperstein wants the grant program to come with legal aides to help them caut through the red tape and keep the city’s contract within city businesses.

This upcoming election is an unprecedented opportunity for the Jewish community of Queens to be involved.

“It’ll be our community putting in somebody who’s actually going to care about the needs of both Jewish and the secular community and make sure that we don’t get eaten up by someone else’s political agenda,” Cyperstein said.