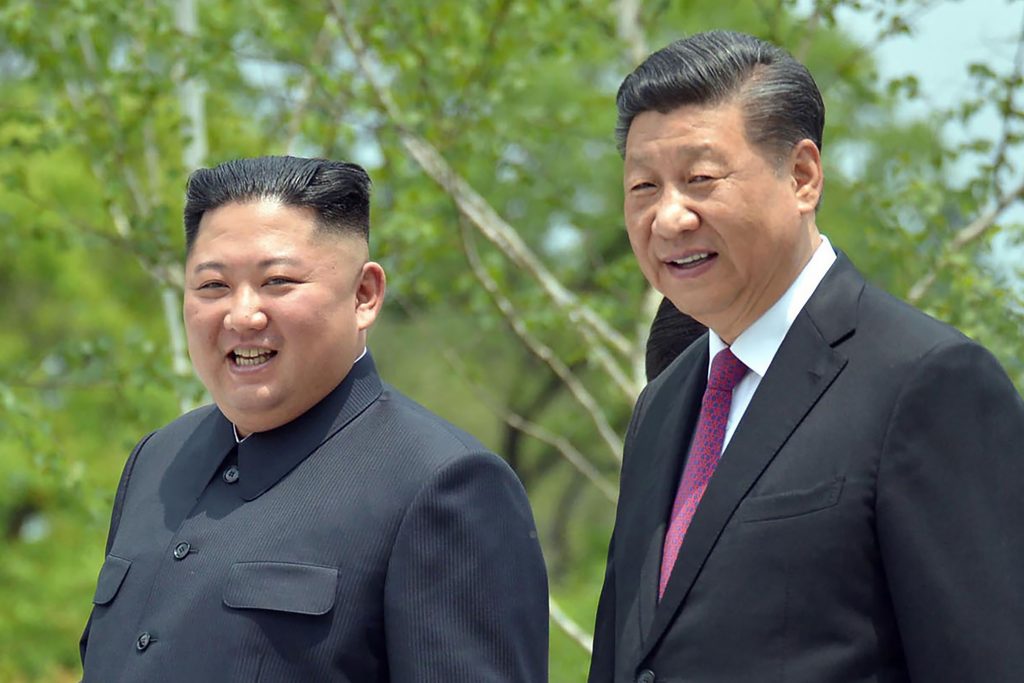 The leaders of China and North Korea are reaffirming their traditional alliance following contentious talks between top diplomats from Washington and Beijing and diplomatic isolation and economic problems in the North that have left it ever-more dependent on the Chinese.

According to KCNA and China’s Xinhua news agency, Xi in his own message to Kim described bilateral relations as a “valuable asset” to both countries and vowed to make unspecified contributions to the peace and stability on the Korean Peninsula.

KCNA said Xi also expressed a commitment to “provide the peoples of the two countries with better life.” Some analysts saw this as an indication that China would soon provide North Korea with badly needed food, fertilizer and other aid that had been significantly reduced amid the pandemic border closures.

Xinhua said the leaders’ messages were exchanged during a meeting between Chinese senior diplomat Song Tao and North Korean Ambassador to China Ri Ryong Nam during a meeting in Beijing on Monday.

The exchange between the leaders came as the Biden administration steps up diplomatic efforts to strengthen cooperation with Asian allies South Korea and Japan to deal with the North Korean nuclear threat and China’s growing regional influence.

Top U.S. and Chinese officials traded sharp and unusually public barbs in Alaska last week in their first face-to-face meetings since President Joe Biden took office, where Secretary of State Antony Blinken said Washington is united with its allies in pushing back against Chinese authoritarianism.

The contentious talks in Anchorage came after Blinken and Defense Secretary Lloyd Austin traveled to Japan and South Korea for talks that mainly focused on North Korea and China.

During his visit to Seoul, Blinken sternly criticized North Korea’s nuclear ambitions and human rights record and pressed China to use its “tremendous influence” to convince the North to denuclearize.

The North has so far ignored Biden’s administration’s efforts to reach out, saying it won’t engage in meaningful talks with the United States unless Washington abandons what Pyongyang sees as “hostile” policies, which clearly refers to the U.S.-led sanctions and pressure over its nuclear program.

KCNA said Kim addressed the state of the North’s relations with the United States and South Korea and said communication between him and Xi was required in the face of changed “external situations and reality,” apparently referring to the new U.S. administration.

Kim’s message “stressed the need to strengthen the unity and cooperation between the two parties and two countries to cope with the hostile forces’ all-round challenges and obstructive moves,” KCNA said.

Kim’s message to Xi was clearly in response to last week’s visits by Blinken and Lloyd to Japan and South Korea, which signaled the start of the Biden administration’s efforts to create a coordinated approach with its allies on North Korea, said Cheong Seong-Chang, director of North Korea studies at South Korea’s private Sejong Institute.

Cheong said it was notable that Xi did not publicly express his support for Kim’s stated plans to expand the North’s nuclear capabilities and instead stressed regional stability.

This shows that China prefers diplomacy over a revival of tensions in the Korean Peninsula, and despite its friction with the United States, could still endorse a resumption of talks between Washington and Pyongyang, he said.

China had advocated a “two-track approach” to the issue, whereby the U.S. would offer security guarantees to North Korea in exchange for Pyongyang abandoning its nuclear weapons programs.

The meetings in Anchorage reflected increasingly troubled relations between the United States and China, which are at odds over a range of issues from trade to human rights in Tibet, Hong Kong and China’s western Xinjiang region, as well as over Taiwan, China’s assertiveness in the South China Sea and the coronavirus pandemic.

Responding to Blinken’s criticism about his government, Communist Party foreign affairs chief Yang Jiechi said Beijing had no intention to back down on any issue and that the United States should stop pushing its own version of democracy at a time when America itself has been roiled by domestic discontent.

As North Korea pursued diplomacy with the U.S. starting in 2018, it also worked to strengthen relations with China, its traditional ally and economic lifeline. But Kim has nothing to show for his ambitious summits with then-President Trump, which collapsed in 2019 over disagreements in exchanging the release of crippling U.S.-led sanctions against North Korea and the North’s disarmament steps.

The North’s economic woes have been compounded by pandemic border closures and devastating natural disasters that wiped out crops last summer. At a ruling party congress in January, Kim vowed to further expand the North’s nuclear program and urged his people to be resilient in the struggle for economic self-reliance.

South Korea’s spy agency told lawmakers late last year that North Korea’s trade volume with China fell by 75% during the first 10 months of 2020. That led to a shortage of raw materials that plunged the North’s factory operations to its lowest level since Kim took power in late 2011, and a jump in the prices of imported foods like sugar and seasonings.

Meanwhile, Russian Foreign Minister Sergey Lavrov was to arrive in South Korea later on Tuesday for talks on North Korea and other regional issues. Public spats between Washington and Moscow erupted this week after Biden during an ABC interview characterized Russian President Vladimir Putin as a “killer” and said Putin will “pay a price” for his efforts to undermine the 2020 U.S. election.