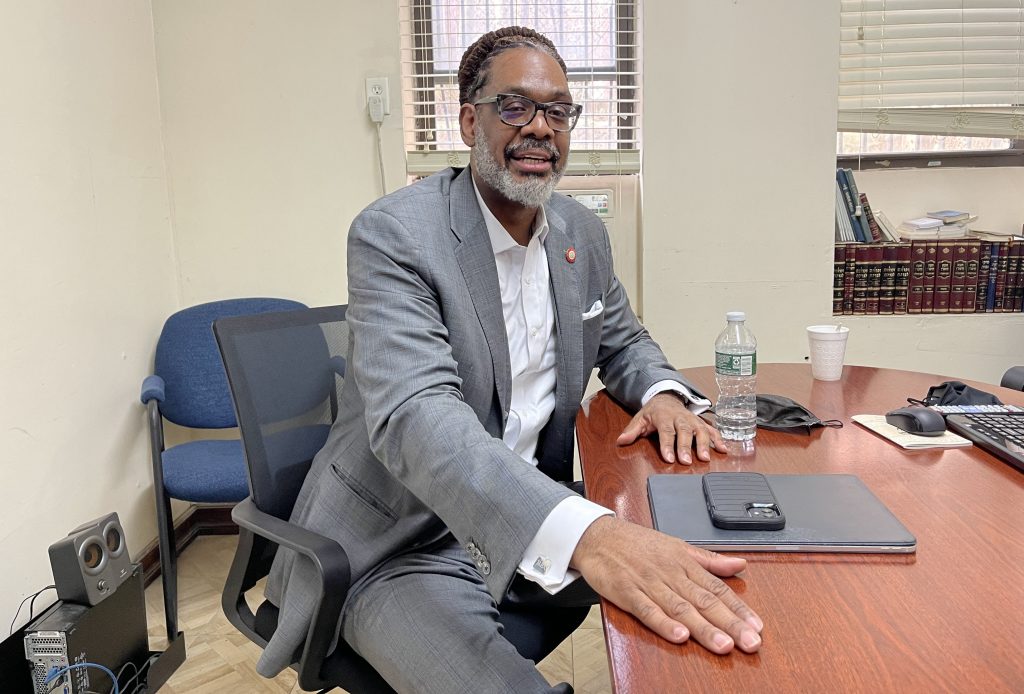 The first thing everyone notices about Robert Cornegy is his height.

“Are you interviewing basketball players now?” my Hamodia colleagues ask, as I walk with my interviewee to the office’s conference room, the 7-footer towering over my suddenly-puny 6’2” frame.

After his basketball career ended, Cornegy established a substance-abuse clinic in his Bedford-Stuyvesant neighborhood, treating mentally ill addicts. He then worked on the central staff of the New York City Council before being elected to the Council in 2013.

Cornegy, whose Bed-Stuy district also has a piece of Crown Heights and Williamsburg, was a Guiness World Record holder as the tallest politician in the world for several months of 2019, before being edged out by North Dakota Insurance Commissioner Jon Godfread.

At the mention of Godfread’s name, Cornegy feigns anger (“Some obscure person now is claiming to be a centimeter taller. From North Dakota, of all places, and I don’t believe that it’s even an elected position. I’ve never heard of it before”) before saying with a defeated smile, “I got a chance to talk to him. He’s a really nice guy.”

But height is not all that distinguishes Cornegy. He’s also known as one of the few “pro-business Democratic Councilmembers” in the legislative body, and he readily decries his party’s leftward move.

In a Hamodia interview, Cornegy discusses his career as a Councilman, the values and projects he hopes to bring to Borough Hall, and his unhappiness over the direction of his party.

Interview edited for length and clarity

Tell us a little bit about your upbringing.

I am the son of the late Rev. Dr. Robert E. Cornegy, Sr., who was a pastor in one of the larger churches in Bedford-Stuyvesant. So I was raised with the mantra of servant leadership.

You played basketball in Israel, among other places.

I did, in 1989. And I got to spend time in a kibbutz. So when we talked about cooperative economics and those kinds of things at the Council, I was like, “I’m acutely familiar with that already.” And I had that as a frame of reference. That was like the first work I got to do at the Council. And I was like, “I learned that in Israel.”

Did you learn any Hebrew?

I did not; youth is wasted on the young. I traveled with an interpreter.

I’m proud to be in the top 10 percent of substantive legislation produced at the Council.

One of the greatest accomplishments, I think, is the “Chamber on the Go” program, which I’ve created. It takes all of the city’s Small Business Services, puts it in an RV fashion, and goes to commercial thoroughfares and does everything from providing access to capital to technical assistance for small businesses. And it’s a great time for that to be utilized, now, with the pandemic and all of the closings.

You have a name as being one of the few New York City Councilmen who are “pro-business.”

I would like for the Council to be more business-minded and business-oriented, especially since the city now has this deficit.

We’re talking about recovery and resiliency. You hear that term from everybody in the administration. But without a solid focus on business, I don’t know how you get a true recovery and resilience, or without a solid focus on creating affordable houses through working with developers. So the two things, I guess, that are against me, if anything, are my penchant for working with responsible developers, and my penchant for small business. And in most instances, they’re actually the same person.

And we chased Amazon away. We chased Industry City’s possibilities away.

The Democratic Party nationally has basically said that any kind of ability to earn or do well is looked at negatively — which is really crazy. During the last presidential election, people said to me, “Why are so many black men going to the Republican Party?” I said, “Because [the Democratic Party has] no narrative of prosperity.”

When you start talking about small businesses, when you start talking about those kinds of things, people shy away in the Democratic Party. And I’m a little disappointed because the Republican Party says: Yes, capitalism is alive and well, you can build a better mousetrap, which is what this country was based on for so long, and you can be successful. The Democratic Party, though, seems to have leaned so far left. It’s scary.

We border two of the largest Hasidic communities in the borough, Crown heights and Williamsburgh, and have to share parks. So it makes sense to me that we have a solid understanding of each other’s culture enough that we can share in the public spaces.

Having lived in Israel, I’ve noticed stark similarities that the communities have around conservative ideals. Brooklyn is known as the “borough of churches,” but it’s actually the borough of churches, synagogues, mosques, and temples. And a lot of those, outside of the small idiosyncrasies that religion brings, are very similar in their conservative values, in their belief in family. So there are so many similarities that I celebrate, and I’ve gotten to celebrate in living in these different places, and watching and having the lightbulb go on for me.

So I’ve been one of the biggest proponents for trying, as best I can, to broker collaborative efforts around issues that affect our communities.

Crown Heights, since the 1991 riot, has made great advances with Jewish-Black relations. It seems that just in the last two years there’s been a little bit of a breakdown again.

Our federal rhetoric has contributed to that immensely.

I try not to mention his name, but yes, Trump has fanned the flames of a bygone era for us. And I don’t even think that he understands — I hope he doesn’t understand — what he actually did for the relations that we fought for, especially in Crown Heights. With the height of those riots, and whether it’s Rabbi Chanina Sperlin, Rabbi Cohen, whether it’s Richard Green, I know so many people who have stood for decades mending those fences, and for that to be eroded with this rhetoric and with this kind of implicit bias and xenophobia and all those kinds of things, I was really disappointed that it could deteriorate that fast, like you said, over the last couple of years.

As someone who solidly is able to bridge gaps, I feel like it’s my responsibility to do so. I work with Richard and with the Rabbis, and we have a great time together, and we go out publicly as much as possible.

Discuss the Borough President’s powers, and how you plan to use them.

The reason that’s important is because the Borough President’s powers center around land use and a capital budget of between $40 million and $60 million annually to help shape the borough.

What is your view of zoning and land use, as far as development?

That’s a great opportunity for us to talk about how to incorporate affordability in the borough. But for me, it actually means the way that we use — and this is going to sound weird — the ability for us to actually exercise our power as a maritime city is a great focus of the land-use process for me. We have not actuated our waterways in a way for commerce, like we did at the turn of the century. In the 19th and 20th centuries, our ports were teeming with the ability to earn capital. Now, at best, they’re great recreation destinations. That’s not what it should be. There are opportunities for us to build, and the power of the Borough President’s office to build and to be able to create commerce along our waterways is a great focus for me.

Those are the discussions that I want to be at the table to have, because there’s mixed-use opportunity to do a little bit of both, but you have to have the land-use power, and you have to have the zoning power to be able to do that. So the power of the Borough President’s office to create commerce to activating our waterways is a key issue for me.

What about real-estate development in terms of home building?

As you mentioned, the Borough President has tens of millions of dollars to spend on capital improvements. Do you have any specific projects in mind yet?

Yes, there’s a lot of money that’s going to need to be spent on the triple cantilever [section of the Brooklyn-Queens Expressway] which I think is incredibly important. I certainly would be willing to invest some of the Borough President’s money to get that done.

Another power the Borough President has is in funding faith-based programs, senior programs. What are your ideas as far as using that money?

The last two Borough Presidents [Marty Markowitz and Eric Adams] had a great relationship with the [religious] community and sat with them, as far as I know, across the board, every part of the [religious] community, and has invested in houses of worship, has helped houses of worship to also create affordable housing through buildings. So I know for a fact that the Borough President’s office has partnered with churches, mosques, synagogues that have had land attached to that to create affordable housing and use capital funding at the Borough President’s office to do that. I will certainly continue to do that.

Do you have any ideas for helping the city’s economic recovery from the COVID shutdown.

I’m really still reeling from the fact that I lost the Industry City fight. I think that there was an opportunity there to create between 8,000 and 20,000 jobs. I was the only elected official who leveraged his political capital to push that project through. I’m going to do way more of that from the Borough President’s perspective, because I think that the economic recovery is part and parcel in getting us back on the right track

You mean trying to attract businesses?

Trying to attract business, but also to support them through tax incentives, which Marty Markowitz did, through using zoning and land use to create, whether it’s industrial parks — I don’t want to do this in a sweeping way, but in a neighborhood by neighborhood manner, creating environments in the communities that can give us long-term job creation and development.