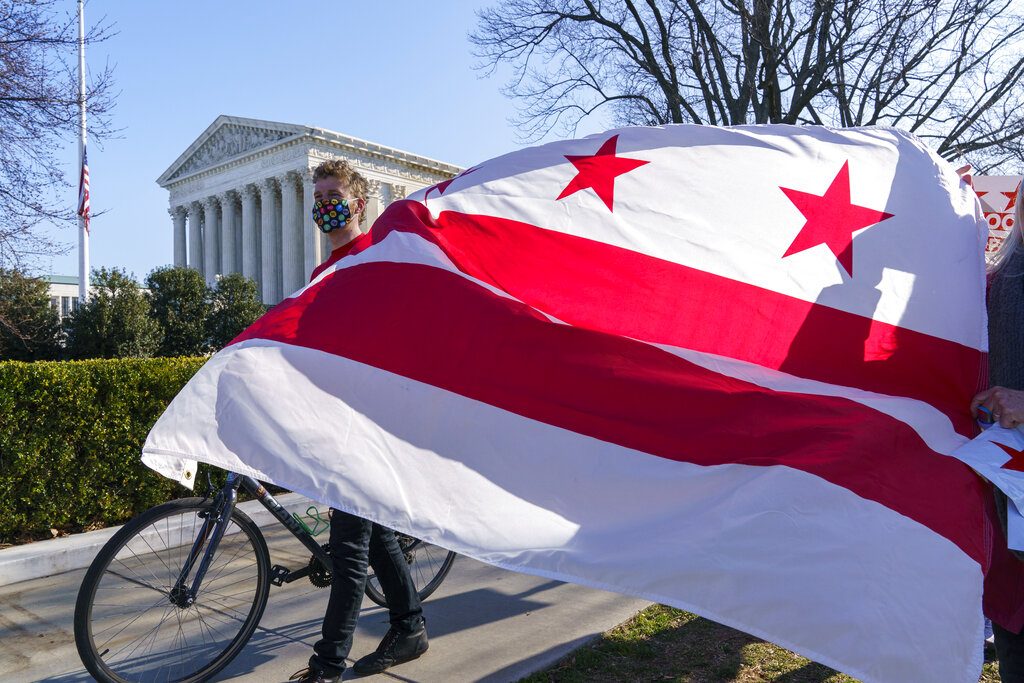 Washington, D.C.,’s bid for statehood finally got a congressional hearing Monday, but Mayor Muriel Bowser’s clashes with Republicans on the panel made clear that the issue is far from settled.

Republicans accused Democrats of a cynical power play, claimed statehood was never the intention of the country’s Founding Fathers, and insisted that Congress doesn’t even have the right to grant statehood to D.C.

Bowser argued that Washingtonians’ lack of representation in Congress was “one of the remaining glaring civil rights issues of our time.”

Supporters of D.C.’s quest for statehood believe the time is right to bring the long-simmering and racially charged idea to fruition. It would give D.C. two senators and a fully voting member of the House. The District historically votes Democratic.

“We dare to believe that D.C. statehood is on the horizon,” said the District’s long-serving, nonvoting delegate, Eleanor Holmes Norton, who wrote the bill and said it has overwhelming support in the House.

Bowser spent much of Monday’s four-hour hearing by the House oversight committee in a series of sometimes pointed exchanges with Republican committee members.

Rep. Andrew Clyde, R-Ga., sought to subvert the District’s “taxation without representation” slogan that adorns local license plates. He asked Bowser if District residents would be OK with the current situation if they didn’t have to pay federal taxes — similar to the residents of Puerto Rico or American Samoa.

“The District is proud to pay its fair share of taxes,” she said. “We’re not trying to shirk our responsibilities.”

Republicans on the panel leaned heavily on the testimony of Zack Smith, a legal fellow with the Heritage Foundation, a conservative think tank. Smith said Congress does have the authority to admit new states, but in his analysis this authority would be irrelevant for the unique case of Washington since the federal district was described and created in Article 1 of the Constitution itself. Therefore, Smith argued, the normal congressional route to statehood is invalid and it can only be achieved through a constitutional amendment.

Smith also argued that the Founding Fathers never wanted statehood for D.C. and always intended it to be a federal district under congressional oversight “to preserve the safety and security of the federal government.”

Multiple Republican legislators referenced the idea of retrocession — a proposal whereby most of the District would be reabsorbed back into Maryland. Both Bowser and Norton said that neither residents of Washington nor Maryland were interested in that.

Washington has long chafed under its relationship with Congress, which has the power to essentially veto or alter any local laws. Washington’s population is larger than that of Wyoming or Vermont and its estimated 712,000 residents pay federal taxes, vote for president and serve in the armed forces, but have no voting representation in Congress.

“All we are asking of you is to correct an anomaly of our history,” Bowser told the committee.

Norton claims she has enough supporters to easily get the bill through the House, and it would squeak through the Senate if no Democrats break ranks and the vote falls along purely party lines. And all indications Monday were that a purely partisan fight is what lies ahead.

“There’s not a single Republican in Congress, in the House or the Senate, that supports this bill.”