Israel Rivlin in Paris, Iran and ICC on Agenda
Israel 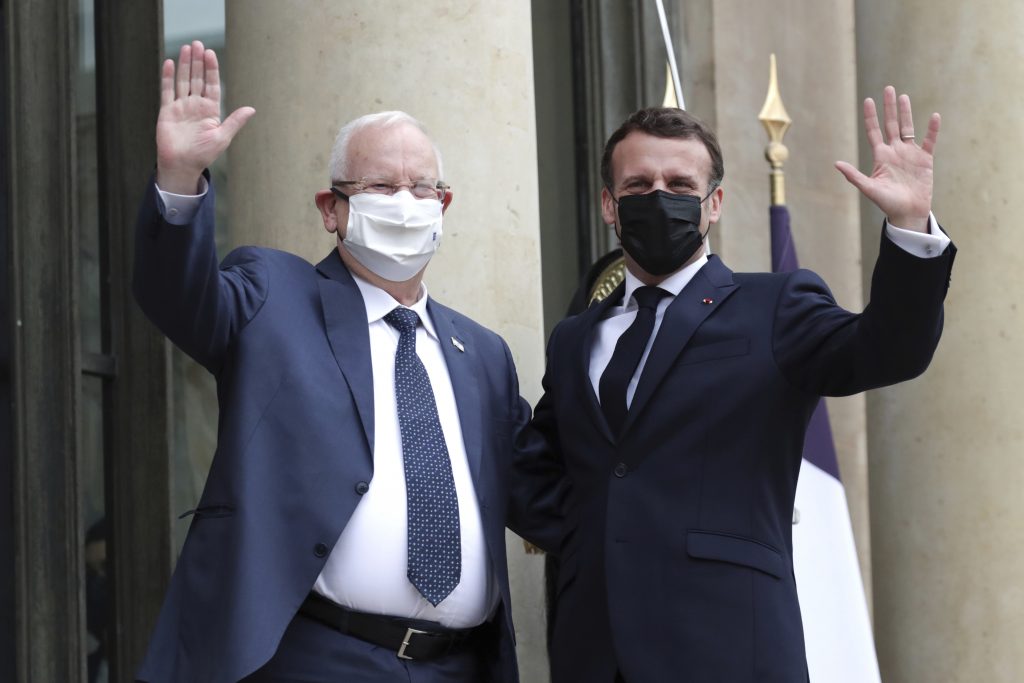 “Iran must stop aggravating a serious nuclear situation with an accumulation of violations of the Vienna accord,” Macron said alongside President Reuven Rivlin of Israel, on a three-nation tour which also included Austria and Germany.

France, along with Britain, Germany and the European Union, is trying to bring the United States and Iran to the table for informal talks that would be a first step to reviving the 2015 deal, which lifted international sanctions on Tehran in exchange for curbs to its nuclear program.

Both sides so far appear unwilling to compromise. The Iranian New Year this week and campaigning for the country’s presidential election in June are also likely to complicate matters.

“Iran must make the expected gestures and behave in a responsible way,” Macron added.

Macron said Paris would continue to work to revive a credible process to end this crisis.

“That means a return to control and supervision of the nuclear program, but also to integrating – as we have called for since 2017 – the control of Iran’s ballistic missile activity,” he added.

Prior to his meeting with Macron, Rivlin published an op-ed articles in France’s Le Figaro, which called on France and other European states to oppose the decision of the International Criminal Court to initiate investigations against IDF soldiers. He raised the issue with leaders in Berlin and Vienna earlier this week before arriving in Paris.

The president stressed the importance of international law to the State of Israel and the misuse of it by the ICC, and pledged that Israel will stand by IDF soldiers who protected its people when asked to do so.

He denounced ICC decision to investigate Israel for possible war crimes as “a dreadful misapplication of international law. A court established to deal with the gravest crimes of concern to the international community is being used as a political weapon. It is a morally and legally bankrupt decision.”

At the end of the article, the president considers the damage that the ICC’s decision is likely to have on the chances of resuming negotiations between Israel and the Palestinians.

“Perhaps one of the most egregious consequences of the ICC’s decision is that it will make it even harder for Israelis and Palestinians to find common ground. Until the Court concludes its investigation, which could take several years, it is hard to see the two sides engaging in serious negotiations. At a time when the recent agreements between Israel and Arab countries make the prospect for such progress better than any time in the recent past, this is an act of perverse logic.

“I call on friends of Israel and the Palestinians, in France and beyond, to state clearly, once and for all, that the road to peace runs directly between Jerusalem and Ramallah. Detours via the ICC in the Hague and the UN Human Rights Council in Geneva are counterproductive to the cause of peace and undermine the chances of an agreement between us,” the article concluded.