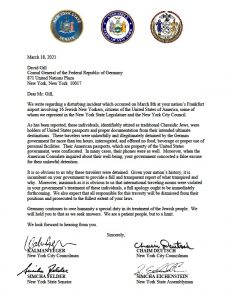 After a group of 16 Orthodox Jews were detained by authorities for several hours in an airport Frankfurt, Germany, and were not given any explanation as to why they were being held, Jewish  representatives from the New York City Council and New York State Senate and Assembly sent a letter to the Consul General of the Germany seeking an explanation as to why this occurred.

The travelers, who were attired in recognizably Chassidic clothing, were detained for over 10 hours on March 8, 2021, and were interrogated for hours without being supplied with food, water or use of personal facilities. Their passports were confiscated, and many of their phones were taken as well. When the American Consulate inquired about their well-being, the excuse for the illegal detention seemed contrived.

“Given your nation’s history, it is incumbent on your government to provide a full and transparent report of what transpired and why,” the letter demanded. “Moreover, inasmuch as it is obvious to us that international traveling norms were violated in your government’s treatment of these individuals, a full apology ought to be immediately forthcoming. We also expect that all responsible for this travesty will be dismissed from their positions and prosecuted to the fullest extent of your laws.”