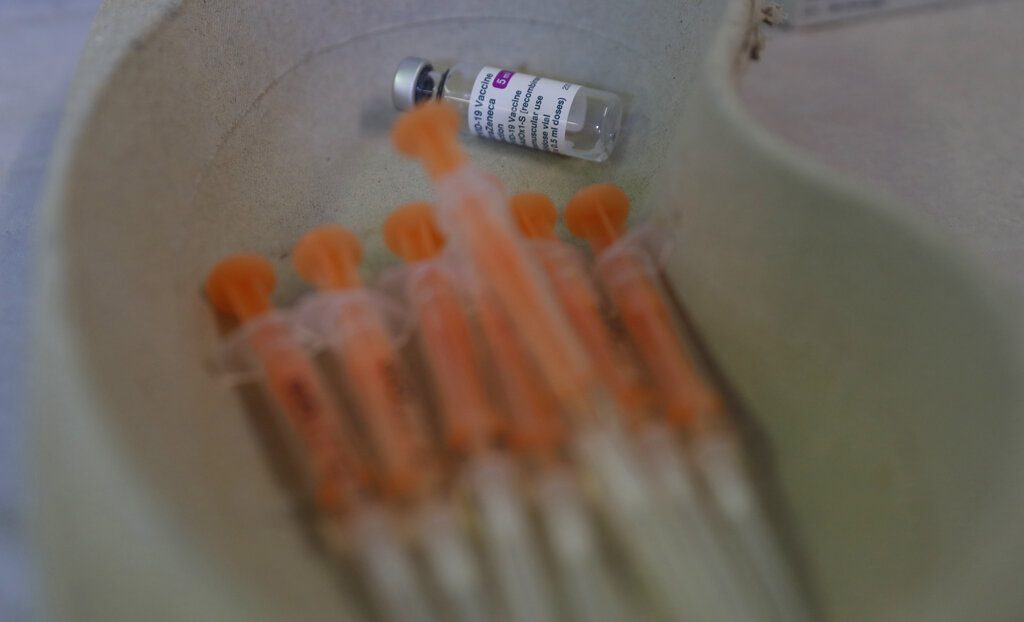 The European Union’s drug regulatory agency says experts have concluded that the AstraZeneca vaccine is not linked to an overall increase in the risk of blood clots and that the benefits of use outweigh the risks.

The finding from the European Medicines Agency could open the way for European countries that had suspended the use of the vaccine over the past week to resume dispensing the shots.

The head of the EMA, Emer Cooke said Thursday that the agency “cannot rule out definitively a link” between rare types of blood clots and the vaccine, however, and experts recommend raising awareness among doctors and recipients of possible risks.

EMA recommended adding a description of these cases to the vaccine leaflets so health workers and patients would be aware of these rare blood clots.

But Cooke also said: “Our scientific position is that is that this vaccine is a safe and effective option to protect citizens against COVID-19. It demonstrated that at least 60% efficacy in clinical trials and preventing coronavirus disease. And in fact, the real-world evidence suggests that the effectiveness could be even higher than that.”

Concerns over the clotting led more than a dozen European countries, including Germany, France, Italy and Spain, to suspend use of the vaccine over the past week, even though the company and international health agencies said there was no indication the shots were to blame and recommended continuing with the vaccinations.

While many countries have continued to use the AstraZeneca vaccine, there are concerns the debate could seriously undermine confidence in the shot, which is key to efforts to vaccinate the world’s population, especially in poorer countries.

In Europe, where there is a choice of vaccines, the safety questions have complicated an already slow rollout across the 27-nation EU at a critical moment when infections are rising at an alarming rate again in many countries, in part because of mutant versions of the coronavirus.

“We are worried that there may be an effect on the trust of the vaccines,” Emer Cooke, executive director of the European Medicines Agency, acknowledged this week. “But our job is to make sure that the products that we authorize are safe and we can be trusted by the European citizens.”

Blood clots have been reported in at least 37 people, and at least four deaths among them have been recorded, out of the 17 million who have received at least one dose of the AstraZeneca vaccine in Europe.

Both the EMA and the World Health Organization have said that there is no evidence to suggest the vaccine was responsible and that the benefits of immunization far outweigh the potentially small risk. The drugmaker likewise said it found no increased risk of clots.

AstraZeneca is expected to apply in the coming weeks for U.S. authorization for its vaccine. The U.S. now relies on vaccines from Pfizer, Moderna and Johnson & Johnson.

On Thursday, ahead of the EMA’s announcement, Britain’s drug regulatory agency said there is no sign AstraZeneca’s vaccine causes clots, and it urged people to continue getting the shot. Britain was not among the countries that suspended use of the vaccine.

The pause in vaccinations with AstraZeneca’s formula comes as tens of thousands of new daily cases have prompted new lockdown measures in Italy, caused hospitalizations in France to spike and led German officials to announce a third surge of COVID-19 has begun.