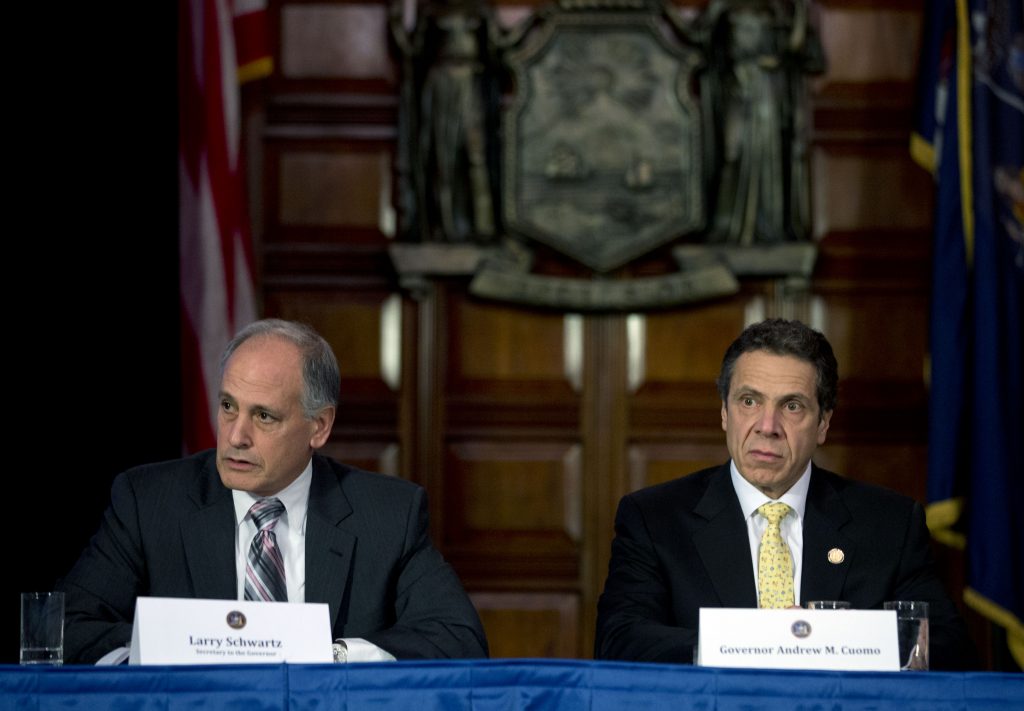 New York’s “vaccine czar” – a longtime adviser to Gov. Andrew Cuomo – phoned county officials in the past two weeks in attempts to gauge their loyalty to the embattled governor amid an ongoing investigation, according to multiple officials.

One Democratic county executive was so unsettled by the outreach from Larry Schwartz, head of the state’s vaccine rollout, that the executive on Friday filed notice of an impending ethics complaint with the public integrity unit of the state attorney general’s office, the official told The Washington Post. The executive feared the county’s vaccine supply could suffer if Schwartz was not pleased with the executive’s response to his questions about support of the governor.

“At best, it was inappropriate,” said the executive, who spoke on the condition of anonymity out of fear that the Cuomo administration would retaliate against the county’s residents. “At worst, it was clearly over the ethical line.”

Schwartz, who is working in a volunteer capacity to run New York’s vaccine distribution, acknowledged making the calls in response to an inquiry by The Post, but said he did so as a 30-year friend of Cuomo and did not discuss vaccines in the conversations.

“I did nothing wrong,” Schwartz said. “I have always conducted myself in a manner commensurate to a high ethical standard.”

Schwartz is one of Cuomo’s longtime lieutenants, serving as secretary to the governor – the most influential aide to the New York governor – from 2011 until 2015, and then advising him off and on since, earning the reputation as Cuomo’s enforcer. Schwartz returned last spring to be the administration’s point person on the coronavirus pandemic – moving into the governor’s mansion at one point – and has managed much of the state’s response.

His calls to county officials could fuel questions about an intermingling of politics with the state’s public health operation. The conversations came in advance of a March 8 announcement by the governor’s office that the state plans to open 10 new mass vaccination sites around New York – distribution hubs that have been keenly sought by local officials.

Arthur Caplan, director of medical ethics at the NYU Grossman School of Medicine, said political outreach by the person helming the state’s vaccine response could lead to officials fearing that vaccine decisions could be based on favoritism.

“People do not see calls coming from the governor’s mansion as somebody wearing one hat and then putting on another hat,” he said. “If you are in control of a vital supply of a life-saving resource like vaccines, you are carrying an enormous amount of implicit clout when you ask for political allegiance. And you shouldn’t be doing that anyway. The public health goal to maximize the best use of vaccines has nothing to do with any public declaration of political fealty. And it shouldn’t even be implied or hinted at.”

In several statements he emailed to The Post on Saturday, Schwartz said the calls he made to assess political support for Cuomo were distinct from the role he plays in the vaccine distribution effort.

“I did have conversations with a number of County Executives from across the State to ascertain if they were maintaining their public position that there is an ongoing investigation by the State Attorney General and that we should wait for the findings of that investigation before drawing any conclusions,” he wrote.

Schwartz described the calls as “cordial, respectful and friendly,” adding: “Nobody indicated that they were uncomfortable or that they did not want to talk to me.”

He added that decisions about where to locate mass vaccination sites are not made by one individual but are determined by members of the governor’s vaccine task force and outside consultants, “based on merit, data and facts and not politics.”

Schwartz declined to answer if he had taken the ethics oath required for New York state public officers. The law states that no officer should engage in conduct that could give an impression that any person could “unduly enjoy his or her favor in the performance of his or her official duties.” Schwartz referred the question to counsel, who did not immediately respond to a Post inquiry.

In interviews with The Post, several public officials who received the calls from Schwartz spoke on the condition of anonymity to describe the conversations, saying they fear swift retribution from Cuomo if they speak out against him.

The officials said Schwartz appeared to be taking stock of where they stood on Cuomo and whether they would continue to support him, and said he emphasized the need to let the state investigation play out.

They described the outreach as politics as usual in the Cuomo administration, which has long earned a reputation for leaning on allies and threatening opponents. The spotlight on the governor’s style has intensified in recent weeks, as Cuomo’s political power has become mired in dual scandals: one related to multiple accusations workplace harassment, and the other centered on his actions related to nursing-home deaths.

On Friday, a majority of the New York congressional delegation – including the state’s two U.S. senators – called for Cuomo to step down, issuing a barrage of public statements, many just minutes apart from one another. One official involved in the discussions said the timing was planned to absolve any one lawmaker from receiving Cuomo’s wrath.

“He can’t kill us all at the same time,” said the official, a senior aide to one of the lawmakers who called for Cuomo to resign, who spoke on the condition of anonymity to describe the internal strategy.

The controversies have been fueled in part by a growing willingness – even among party allies – to break a code of silence that was long expected in the notoriously cutthroat and fealty-driven world of New York politics.

Ron Kim, a New York state assemblyman, went public in February with a call from Cuomo that he said was explicitly threatening in nature over his criticism of the nursing home deaths scandal. A top Cuomo adviser has disputed that Cuomo threatened to “destroy” Kim, as Kim has said.

One of Cuomo’s accusers, former staffer Lindsey Boylan, has alleged that Cuomo’s aides leaked her personnel file to reporters, and on Friday, the Wall Street Journal reported on attempts by the governor’s aides to call former employees attempting to glean information about Boylan.

But now, she said, “You’re seeing some of the fear starting to crumble. So when you have that stripped away, you don’t have a lot to back you up.”

A spokesman for Cuomo did not respond to a request for comment on the governor’s reputation for exacting retribution.

Amid the burgeoning crises, Schwartz has remained his staunch ally. After several years working in the private sector, he returned to Cuomo’s side in the early days of the coronavirus pandemiclast year, volunteering to manage medical equipment and supplies directed to hospitals and health care systems.

Schwartz told The Post that he assisted with ensuring bed capacity for hospitals and helped launch a contact tracing program. He said he currently is volunteering in his role as head of the vaccine rollout.

In his book “American Crisis: Leadership Lessons from the COVID-19 Pandemic,” Cuomo wrote that when he had asked Schwartz to help him manage the public health crisis, “I knew that if I asked, he wouldn’t say no; he was that good a friend. I’d known him for thirty years.”

Cuomo said he even invited Schwartz to move into the governor’s mansion for a period of time, along with him, his dog, Captain, and his three daughters, writing, “Now Larry was added to the pack.” He said Schwartz put in long hours, often not returning to the mansion until midnight or 1 a.m.

Across the state, Schwartz is viewed as someone with singular influence.

Schwartz told The Post that he holds weekly calls with county executives and county health officials.

But he said that when he called county officials to assess their support for Cuomo, “they were hearing from me as someone who has (known) the Governor for 30 years and someone who has been involved in NYS Government and Politics for about the same time.”

He said he made the calls at night, although he said some officials may have returned the calls the following morning. “I find time to oversee the vaccine program and well as take on other responsibilities,” he wrote in an email. “I am able to multi task.”

“Everyone took my call or called me back,” he added. “NOBODY indicated they were uncomfortable discussing with me or thought it was inappropriate.”

When asked if Cuomo directed him to reach out to county officials, he responded: “It was my decision to make the calls.”

The Democratic county executive who filed notice of an ethics complaint said that Schwartz made no explicit threat to withhold vaccines, but felt there was an implication of what was at stake, given Schwartz’s influence over the vaccine distribution channels and the fact that he only called or emailed to discuss vaccine allotment.

“I’m not calling about vaccines,” Schwartz told the executive, then stressed that it was crucial to let the investigation by the attorney general play out, according to the executive.

If the executive’s position on Cuomo changed, Schwartz said, he would appreciate a head’s up, according to notes the executive took at the time.

“There was a lot going through my mind,” the executive recounted. “This is putting me in an impossible position where I potentially have to choose between like a weird political loyalty to a governor who controls a lot of things, not just vaccine, and is known to be vindictive, and on the other side, doses of lifesaving vaccine every week for my residents who are literally desperate for them.”

A spokesman for the state attorney general’s office did not respond to a request for comment about the notice of an ethics complaint the executive filed.

In describing the calls to The Post, Schwartz said, “there was no pressure and I never asked anyone to support the Governor. All I asked them was if their public position of calling for an independent investigation by the Attorney General and waiting for the outcome of her report had changed.”

He said vaccines are distributed in the state based on the number of eligible residents and a county’s administration rate.

“It’s not based on favoritism, politics or anything else,” he wrote. He also said he took offense at the fact that his “accuser” was speaking anonymously.

Several Republican county executives reached by The Post said they had not received such calls from Schwartz. A longtime Cuomo critic, Rensselaer County executive Steve McLaughlin, quipped, “He didn’t call me because he knew I would never say something nice about (Cuomo).”