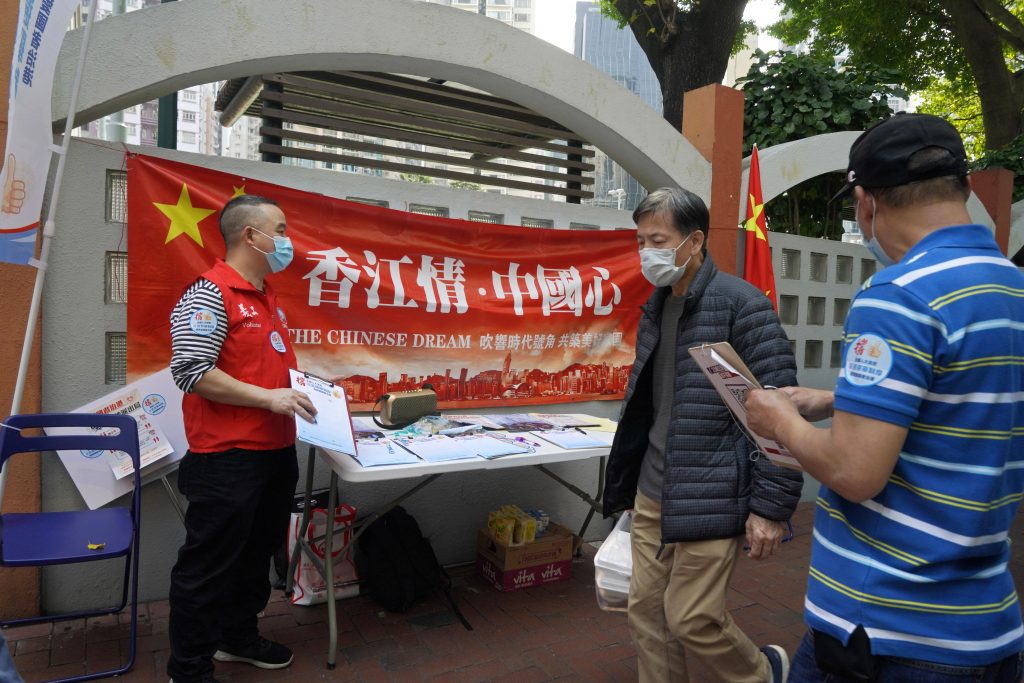 Semi-autonomous Hong Kong is an internal Chinese issue that no foreign country has the right to interfere in, said Zhang Xiaoming, deputy director of the Hong Kong and Macau Affairs Office of the State Council.

“I don’t know that after the storming of the U.S. Capitol on January 6, how the U.S. has such moral capital to point fingers at the election institutions of Hong Kong,” he said.

A statement from U.S. Secretary of State Antony Blinken condemned what it called China’s “continuing assault on democratic institutions in Hong Kong.” It followed Thursday’s approval by China’s rubber-stamp legislature of a plan to increase Beijing’s control of how Hong Kong’s legislature is chosen.

The changes would give a largely pro-Beijing Election Committee the responsibility of nominating all members of Hong Kong’s legislature and directly electing some lawmakers to ensure that Hong Kong is administered by “patriots” and exclude “anti-China” forces from holding key roles in governance.

The 1,500-member Election Committee will pick the territory’s chief executive and an unspecified “relatively large” number of its 90-seat legislature. The revision has prompted concern that the proportion of directly elected lawmakers will be reduced.

Zhang likened the changes to Hong Kong’s electoral system as a “minimally invasive surgery” that will restore health to the city’s “democratic system.”

“The distinctive features of minimally invasive surgery are small wounds, deep penetration, and quicker recovery,” he said, adding that Hong Kong residents will be able to live and work more peacefully as a result.

Zhang also said that the electoral changes are not aimed at excluding Hong Kong’s pro-democracy camp from the governance structure as anti-China forces cannot be equated with the opposition.

“The opposition, especially the pan-democrats, also have patriots, and they can still stand for election and be elected according to law in the future,” he said.

Zhang’s comments come even as 47 pro-democracy activists and former legislators were charged in court for subversion last week for their involvement in an unofficial primary election that authorities say was part of a plot to paralyze the Hong Kong government.

Most of Hong Kong’s prominent pro-democracy advocates are currently in jail or in self-exile. Of the 47, only five have received bail.

On Friday, 21 activists who were denied bail last week appeared in court for a bail review.

The court rejected 11 bail applications, including those from former lawmakers Claudia Mo and Leung Kwok-hung. The remaining 10 defendants withdrew their application. They will remain in custody.

For former lawmaker Emily Lau, a member of Hong Kong’s Democratic Party, Zhang’s words provide little reassurance that any semblance of democracy can still be maintained.

“I consider myself a patriot,” said Lau. “But our worry is that many people from my party, and from the pro-democracy camp may be excluded.”

She said that even after lawmakers are elected, there is still continuous vetting throughout their service, since they can still be stripped of their seats if they’re found to be insufficiently patriotic.

“I don’t know what their definition of patriotism is, and that is the worrying thing,” she said. “Once this [electoral system] is set up, you will lose the confidence of the people, and that’s bad for any government.”