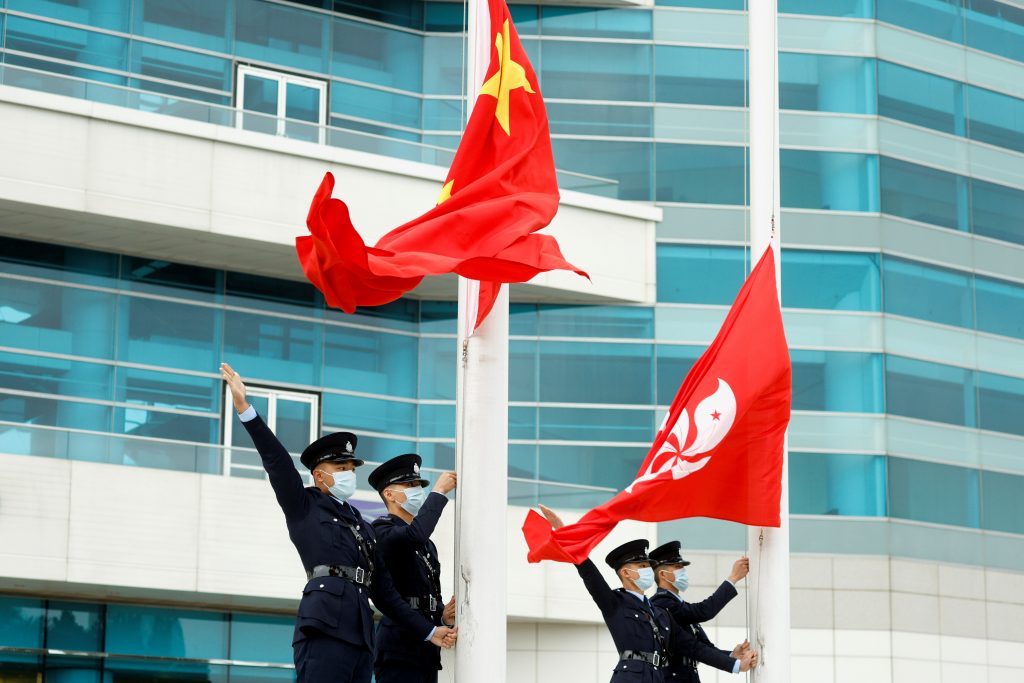 The measures are part of Beijing’s efforts to consolidate its increasingly authoritarian grip over the global financial hub following the imposition of a national security law in June, which critics see as a tool to crush dissent.

Beijing is responding to pro-democracy protests in Hong Kong in 2019, which it saw as a threat to China’s national security. Since then, most high-profile democratic politicians and activists have been sent to jail or are in self-exile.

“The central authorities have good intentions,” the Liaison Office, Beijing’s representative body in Hong Kong, said in a statement.

“We expect all sectors of the community and the general public to take ownership of the work to amend the law and offer suggestions, so that a strong positive energy can be gathered under the banner of patriotism and love for Hong Kong.”

The legislators gathered in the Great Hall of the People burst into sustained applause when the 2,895 to 0 vote tally, with one abstention, was projected onto screens.

The restructuring is aimed at getting the city “back on the right track,” Lam said.

The changes virtually eliminate any possibility of the opposition affecting the outcome of elections in the former British colony, whose return to Chinese rule in 1997 came with a promise of a high degree of autonomy.

The blanket requirement for “patriotism” raises the risk that politicians will start competing over who is more loyal to Beijing, rather than who has the better ideas for how the city should be governed, analysts say.

The head of Hong Kong’s legislature, the secretaries for justice and security, the customs department, the immigration office, the correctional services department, the police chief and the fire service all issued separate statements praising China’s moves.

Hong Kong Secretary for Mainland and Constitutional Affairs Erick Tsang has defined patriotism as “holistic love” for China, including the leadership of the Chinese Communist Party.

“This is the latest step by Beijing to hollow out the space for democratic debate in Hong Kong,” Raab said.

The draft decision said the move will help “develop a democratic system in line with Hong Kong’s actual situation” and protect residents’ “rights to vote and be voted,” according to state news agency Xinhua.

Chinese Premier Li Keqiang told reporters the purpose of the changes was to “adhere to and improve” the one country, two systems principle agreed for Hong Kong at the handover.

The measures will alter the size and composition of Hong Kong’s legislature and an electoral committee selecting the chief executive in favour of pro-Beijing figures.

The committee will also be given powers to select many city legislators. A new mechanism will be set up to vet candidates and screen election winners’ behaviour to make sure only those seen as patriots rule Hong Kong.

Currently half of the 70 seats in the Legislative Council, known as LegCo, are directly elected, a proportion which will shrink with the extra seats picked by the electoral committee. The other half represents industries, unions, and professions and is largely stacked with pro-Beijing figures.

Beijing had promised universal suffrage as an ultimate goal for Hong Kong in its mini-constitution, the Basic Law.

Critics say the changes to the electoral system move Hong Kong in the opposite direction, leaving the democratic opposition with the most limited space it has ever had since the 1997 handover, if any at all.

It is not clear what shape any future opposition could take and how its message could comply with loyalty requirements.