Wave of Retirements Signals Battles Ahead for Republicans

This is not the way Republicans wanted to begin the year.

Missouri’s Roy Blunt on Monday became the fifth Republican senator to announce he will not seek reelection, a retirement wave that portends an ugly campaign season next year and gives Democrats fresh hope for preserving their razor-thin Senate majority.

History suggests Republicans are still well-positioned to reclaim at least one chamber of Congress next year. But officials in both parties agree that the surge of GOP departures will make the Republicans’ challenge more difficult in the Senate.

“Any time you lose an incumbent, it’s bad news,” said Republican strategist Rick Tyler, who briefly worked for failed Missouri Senate candidate Todd Akin nearly a decade ago. “Missouri’s not necessarily a safe state for Republicans. Democrats have won there.”

The 71-year-old Blunt’s exit is a reminder of how the nation’s politics have shifted since the rise of Donald Trump. Blunt and his retiring GOP colleagues from Ohio, Pennsylvania, North Carolina and Alabama represent an old guard who fought for conservative policies but sometimes resisted the deeply personal attacks and uneven governance that dominated the Trump era.

Their departures will leave a void likely to be filled by a new generation of Republicans more willing to embrace Trumpism — or by Democrats. 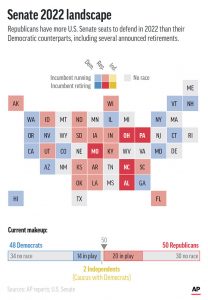 Steven Law, a key ally of Senate Minority Leader Mitch McConnell and CEO of the Senate Leadership Fund, warned that Republicans may be beginning to repeat the mistakes of 2010, when the GOP lost the Senate majority by embracing flawed far-right candidates.

“We have an opportunity to win back a majority,” Law said. “But in 2010, that opportunity was lost on the Senate side because of unelectable candidates who got nominated.”

Democrats are expected to be more competitive in North Carolina, where Trump eked out a victory by just 1 percentage point, and in Wisconsin if Republican Sen. Ron Johnson follows through with a campaign promise not to seek more than two terms.

Democrats have not lost any incumbents to retirement, but they are defending vulnerable incumbents in Georgia and Arizona, among others. And they have no margin for error. Republicans will claim the Senate majority for the last two years of President Joe Biden’s term if they pick up even one additional seat next November.

The party that occupies the White House traditionally suffers significant losses in the first midterm election of a new president. President Barack Obama’s Democratic Party, for example, lost 63 seats in the House and six in the Senate in 2010.

Democrats are hopeful that Trump will become an unwitting ally in 2022. The former Republican president has vowed to play an active role in the midterms, particularly by supporting pro-Trump candidates in primary elections. That may harm well-established Republicans like Blunt who are popular statewide.