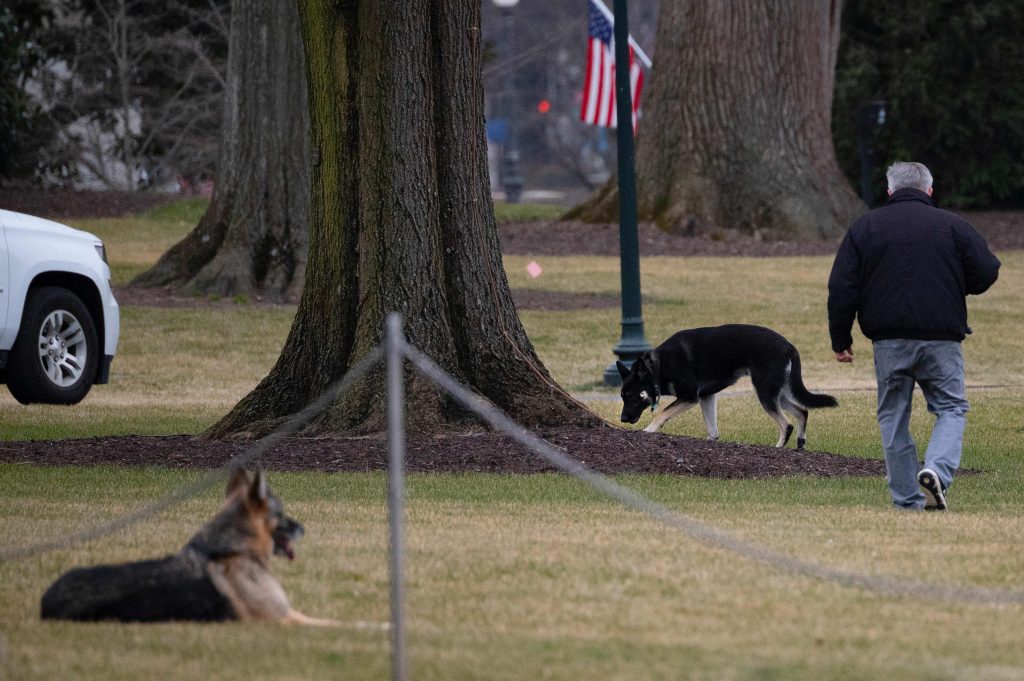 Family dogs Major and Champ have been banished from the White House for a doggie time out in Delaware after Major caused a “minor injury” to a Secret Service agent.

White House press secretary Jen Psaki explained the canine caper Tuesday by saying the dogs “are still getting acclimated and accustomed to their new surroundings and new people.”

“On Monday, the first family’s younger dog Major was surprised by an unfamiliar person and reacted in a way that resulted in a minor injury to the individual, which was handled by the White House medical unit, with no further treatment needed,” Psaki said.

She would not confirm that a Secret Service agent was injured in Monday’s incident, but an administration official later said an agent was Major’s victim. The agent was not seriously injured, said the official, who was not authorized to comment publicly and spoke to The Associated Press on the condition of anonymity.

Psaki said plans already had been made to send the dogs to Delaware for care while Biden’s wife, Jill, left town on Monday to spend Tuesday and Wednesday touring U.S. military installations in Washington state and California. The dogs will return to the White House soon, Psaki said.

“With the first lady traveling for three days, Champ and Major went to Delaware to stay with family friends,” Michael LaRosa, spokesperson for Jill Biden, said Tuesday in an email.

Jill Biden has been preoccupied with getting the German shepherds settled in at the White House, which can be a difficult place even for a human to get used to. The president said a few weeks ago that even he is still getting used to the trappings of his office.

“I’ve been obsessed with getting our dogs settled because we have (an) old dog and we have a very young dog,” the first lady told talk-show host Kelly Clarkson in a recent interview.

“They have to take the elevator. They’re not used to that. They have to go out on the South Lawn with lots of people watching them,” she said. “So, you know, that’s what I’ve been obsessed with, just getting everybody settled and calm.”

Major, who is about 3 years old, burst onto the national scene late last year after Biden slipped during doggie playtime at home near Wilmington and broke a bone in his right foot.

The Bidens adopted Major in 2018 from the Delaware Humane Association.

They got Champ, who at age 13 is less spry and likely calmer, from a breeder. He joined the family after Joe Biden was elected vice president in 2008.

Jill Biden brought the dogs to the White House shortly after the inauguration in January.

White House furniture is off limits, she said, but Major has showed his disobedient side. “I caught him on the couch the other day, but he quickly jumped down,” the first lady told Clarkson last month. The dogs are allowed to run around on the South Lawn, she said.

Their favorite spot is “wherever we are. Even if my door’s closed, they’re sitting right outside the door like, ‘Let me in, let me in,'” Jill Biden said.

CNN reported late Monday, citing unidentified sources, that the dogs were sent to Delaware after Major was involved in a “biting incident” with an unidentified White House security team member.

Kitty Block, president and CEO of the Humane Society of the United States, said serious dog bites are rare and that owners can reduce the likelihood of a bite or other accident by getting to know the canines and the signals they send when they’re scared or feeling stressed.

Like humans, some dogs adapt to new environments quickly while others may need weeks or a few months, Block said.

“Introducing dogs slowly to new rooms, environments and people can help make the adjustment period smoother,” she said in an email, adding that each dog is different.

Meanwhile, Jill Biden previously promised to broaden the family’s pet pool by eventually introducing a cat to the mix, too.

Psaki had no update to offer Tuesday on the cat’s arrival but predicted the announcement of White House feline “will break the internet.”