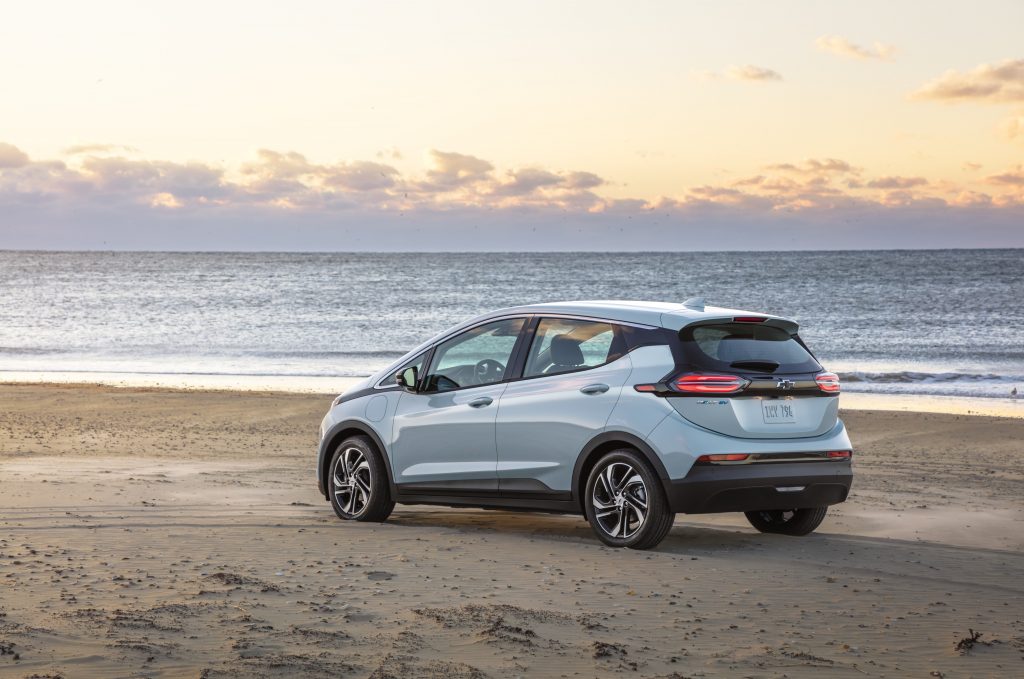 The second-generation, battery-powered Chevy Bolt EV is better than ever. I just wish it were a Caddy.

The 2022 Bolt EV (as in Electric Vehicle) has acquired a stretched version — called the Bolt EUV (Electric Utility Vehicle) — and all kinds of luxury touches. Super Cruise self-driving like a Cadillac Escalade. Three inches of rear legroom like a stretched Audi A8 L model. Panoramic sunroof like an Acura RDX. Rear-view camera mirror like a Caddy. Clean, grille-less fascia like a Tesla.

The old Bolt’s plastic grille never quite fit. Like the Tesla Model S’s original plastic “nose cone,” it appeared fake, cheap. The new Bolt mug is post-petrol modern. Inside, the cabin is stylish with console “trigger shifter” and all-digital displays.

At the wheel of a Bolt EUV, I nailed the throttle out of a Downriver, Interstate 75 cloverleaf. The wee ute responded with instant torque — and minimal body roll thanks to the sub-floor battery pack. Approaching a stoplight, I lifted my right foot and Bolt eased to a stop with regenerative braking. Just like Tesla.

A size smaller than the compact Tesla Model 3/Y lineup that starts at $38,190, the subcompact Bolt EV/EUV model line begins at $31,995 and is perfectly priced to take on the Silicon Valley electric vehicle maker.

If it were a Caddy.

Cadillac has announced it is going all-electric this decade, a bold move aimed directly at the Tesla juggernaut — the only American luxury brand to make a dent in the Teutonic trio of Audi, BMW and Mercedes. Caddy has already announced the $60,000 Lyriq — an upmarket Tesla Model S fighter due in 2023. The Bolt EUV would make a perfect, entry-level companion.

If it were a Caddy.

Alas, as a Chevy, the subcompact Bolt EV’s $31,000-plus price tag will seem exorbitant when it arrives on showrooms this summer next to the brand’s attractive lineup of gas-powered utes. The similarly sized subcompact Chevy Trailblazer, for example, starts at $19,995. The Bolt EUV? $33,995. Oh.

“There is no better demonstration to GM’s commitment to electrification than the offering of a Chevy product,” said Chevy marketing chief Tony Johnson. GM says all its brands will be electric-only by 2035.

But a serious commitment to convert the masses to battery power would mean offering a $20,000 Bolt EUV to match Trailblazer. Pack a $32,705 Trailblazer to the gunwales — panoramic sunroof, leatherette seats, all-the-safety-stuff — and it is still cheaper than a base Bolt EUV. My loaded Bolt EUV tester rang the cash register at about $43,000.

Sure, the Bolt EUV offers that whiz-bang $2,200 Super Cruise feature, but I wager most people who live in wintry climes would trade that for the Trailblazer’s $2,000 all-wheel-drive option. The Bolt EUV doesn’t offer AWD — a deal breaker for many snowbound SUV customers like Mrs. Payne.

Range anxiety is a serious problem for EVs — especially for the average Chevy customer who uses their steed as primary transportation. Advantage gas-powered Trailblazer. Or Trax or Equinox.

You see the holes in this idea that everyone will buy electric in 15 years. I’m not buying it.

More likely the folks buying the Bolt EV/EUV will be niche customers who seek out EVs: Customers who would expect to pay a 10-grand premium on a subcompact SUV, or who would have a second (or third) car for long-distance trips and only use the EV for daily commutes.

So is the 2022 Bolt EV/EUV better positioned to appeal to that niche customer than it was when it debuted as a 2017 model? Absolutely.

Start with the price. Bolt EV is a cool $6,000 cheaper than the first-gen model. Oh yes, I’m old enough to remember when the 2017 Bolt opened to a Motown fever predicting Tesla had met its match. Then priced at $37,495, the Bolt EV went mano a mano against the 2017 $35,000 Model 3 — the General’s well-oiled manufacturing machine beating the typically tardy Silicon Valley automaker to market by eight months.

Bolt sales haven’t topped 24,000 annually. When the Model 3 finally started deliveries (including to your humble scribe), it sold over 140,000 units in 2018, becoming luxury’s best-selling vehicle. Sales eclipsed 200,000 last year. Brand matters, and Chevrolet is no Tesla.

This is where Chevy’s recipe gets creative.

Grabbing from Cadillac’s cookbook, Chevy spiced my $43,000 Bolt EUV with Tesla-like, Super Cruise driver assistance. No other mainstream brand can touch it. Entering I-75, I pressed the Super Cruise icon on the steering wheel and a green bar lit up the top of my steering wheel.

With an infrared camera mounted on the steering to make sure I didn’t nod off, Super Cruise took over the Bolt so I could eat breakfast (raspberry tart and milk. Delicious), check email, and so on. No interruptions like my Model 3’s Autopilot nannying me to keep my hands on the steering wheel. When it was time to exit the interstate (Super Cruise works only on divided highways), the Bolt EUV kindly asked that I take over again.

Never mind that, ahem, few will use Bolt EUV as a trip vehicle (charging infrastructure is still thin). Most will just use it around town (Chevy will install a 240-volt charger in your garage for free). But Super Cruise is the type of tech that EV geeks expect in the Age of Tesla.

If only the Bolt had edgy lines and a vertical light signature. Like a Caddy.