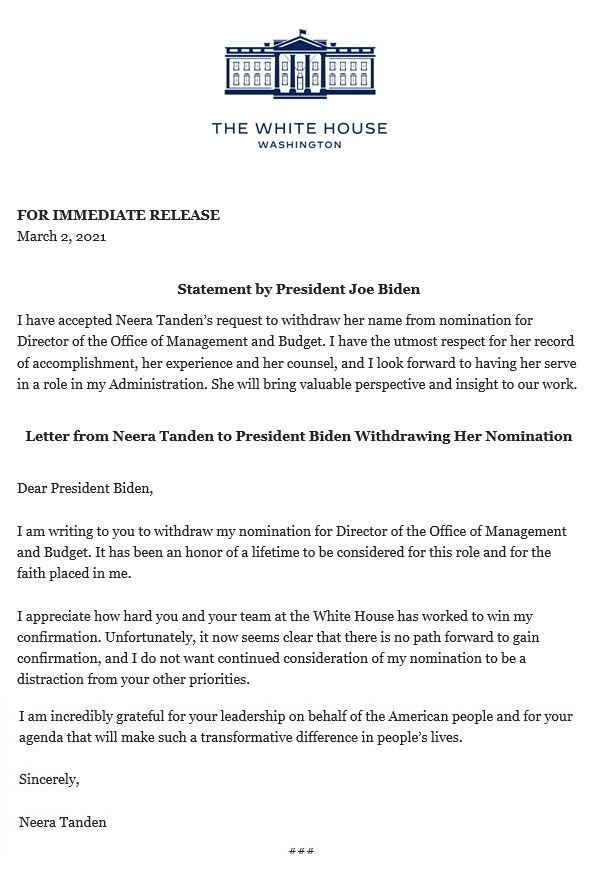 President Biden’s nominee to serve as Director of the Office of Management and Budget, Neera Tanden, has withdrawn her name from consideration for that prestigious position.

In a letter to the president, Tanden wrote, “I am writing to you to withdraw my nomination for Director of the Office of Management and Budget. It has been an honor of a lifetime to be considered for this role and for the faith placed in me.

Tanden’s nomination was seen as vulnerable to being rejected as Senator Joe Manchin, D-W. Virginia, came out as opposing her for her sharp and negative comments over the past few years. The administration tried to save it by lobbying several Republican senators to back her, but apparently was unable to achieve their goal.

Tanden acknowledged this by writing, “I appreciate how hard you and your team at the White House has worked to win my confirmation. Unfortunately, it now seems clear that there is no path forward to gain confirmation, and I do not want continued consideration of my nomination to be a distraction from your other priorities.

The White House Press Office released a statement by the president stating, “I have accepted Neera Tanden’s request to withdraw her name from nomination for Director of the Office of Management and Budget. I have the utmost respect for her record of accomplishment, her experience and her counsel, and I look forward to having her serve in a role in my Administration. She will bring valuable perspective and insight to our work.

Officials have suggested that the president plans to assign her to another position which would not require Senate approval.