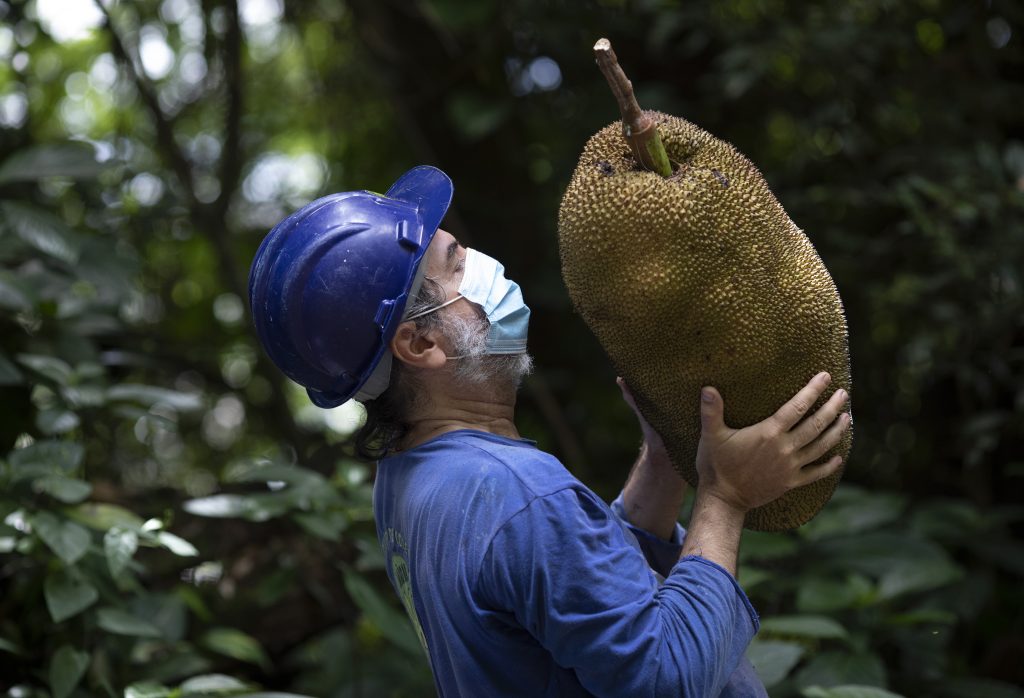 On the morning of Feb. 10, a cyclist chugged his way up the curves of Rio de Janeiro’s most popular sport cycling road. A familiar scent wafted in the air.

It was the smell of jackfruit, vaguely cloying and ripe with peril.

Without warning, one fruit plummeted from the heavily laden canopy of Tijuca National Park. It hit the cyclist on the head, cracking his helmet and sending him sprawling.

There had long been stories of the world’s largest tree-borne fruit divebombing passersby. Now it was no longer urban legend, and that was potential trouble for Marisa Furtado and Pedro Lobão, a couple who have taken up the challenge of rehabilitating the fruit’s public image.

Jackfruit is abundant during the Southern Hemisphere’s summer, but many Brazilians are loath to eat it. Historically, it has been consumed more by the poor or enslaved; in barbecue-mad Brazil, the idea of fruit substituting for meat is viewed with suspicion.

It’s considered an invasive species, even if it arrived here centuries ago. Ecologists disdain it for crowding out native species in 13 federal conservation units across Brazil’s Atlantic Forest, especially Tijuca park, one of the world’s largest urban forests.

And now cyclists spreading news of the accident on message groups and Facebook were accusing the fruit of assault. One posted that he had skidded out on jackfruit. Others shared close calls, like a jackfruit exploding so close it splattered a bike’s spokes with shrapnel. Riding under jackfruit, another said, was like Russian roulette.

But this isn’t the jackfruit Furtado knows and loves.

Furtado, 57, drinks a jackfruit smoothie every day. She and Lobão collect unripe jackfruits from trees, process them for sale, donate whatever they can’t unload, and share free recipes. She rattles off entrees — jackfruit cod, jackfruit lasagna, jackfruit pie, jackfruit tenderloin — and insists that they are both tasty and nutritious.

“History loads the jackfruit with prejudice. Today we hear about the jackfruit that stinks, … the violent jackfruit, the invasive jackfruit,” Furtado said. “It’s true: Jackfruit adapted very well. So everyone who adapted this well to Brazil should be exterminated?”

In the 17th century, the Portuguese transported jackfruit seedlings to Brazil, where it was visual curiosity, and the tree soon reached Rio, according to Rogério Oliveira, an environmental and ecological history specialist.

The emperor ordered massive reforestation. Jackfruit thrived in the degraded soil and produced gargantuan fruit that crashed to the ground and tumbled downhill, scattering seeds. The trees — which can reach 80 feet tall — took root, anchoring the soil and feeding animals.

Thirty-four vertebrates in Brazil partake, including agoutis and black capuchin monkeys, according to a paper that journal Tropical Ecology published this month. Endangered golden-headed lion tamarins, too. Population densities are higher where jackfruit is their primary food.

“Instead of favoring diversity of fauna, of amphibians, of insects, you prioritize those who use jackfruit. You simplify the tropical chain,” said Abreu, a biologist who has studied jackfruit’s invasiveness. “Some rare species start to disappear, or become rarer.”

To the extent Brazilian humans consume jackfruit, it’s mostly eaten ripe. It tastes like a combination of pear and banana.

Unripe jackfruit is used in savory dishes. In India, jackfruit has been a meat alternative for centuries, even called “tree goat” in West Bengal state, says Shree Padre, a farming magazine editor. Once considered a poor person’s crop, cultivation and export have increased, coinciding with global interest in the “superfood,” he said.

Regina Tchelly, who hails from poor, northeastern Paraiba state, enjoyed jackfruit flesh and roasted seeds as a girl. In 2018, with money tight, she dreamt up a spin on shredded chicken dumplings made from jackfruit. It sold like crazy, said Tchelly, who runs culinary project Favela Organica.

Tchelly swapped some recipes, like her jackfruit seed ceviche, for Furtado’s seeds. She says jackfruit could end Brazilian hunger — a fresh concern after the government ended COVID-19 welfare payments.

“It’s a food that’s so abundant, and the jackfruit can bring lots of nutrients to your body and be a source of income,” Tchelly said.

During the pandemic, the road into Tijuca park has become an ideal venue for socially-distanced exercise, and so potential jackfruit targets abound. Some cyclists contacted authorities after the accident, demanding action that could include cutting overhead branches or tree removal.

“Before, removal of jackfruit trees was an internal issue of the park. But now there are jackfruits threatening lives!” said Raphael Pazos, 46, founder of Rio de Janeiro’s Cycling Safety Commission. “If he hadn’t been wearing a helmet, or if it had fallen on a 4-year-old, it could’ve killed.”

By phone, Furtado tried to calm the outcry by reaching out to cyclists, including the one who was struck. He declined AP interview requests.

She sought to steer them toward mapping jackfruit trees’ locations, posting signs about their benefits and organizing collection of fruit. Along the road, she said, jackfruits could be snagged using a truck-mounted crane then donated to surrounding communities, with Hand in the Jackfruit holding workshops to teach the sticky, labor-intensive art of processing. She spoke at length with Tijuca park’s coordinator, too, and made her case.

Furtado acknowledges the importance of diversity, but argues a centuries-old Brazilian resident shouldn’t be cast out of the garden.

“It’s an inheritance that needs to be valued, from the social, economic, cultural and environmental points of view,” she posted on Instagram. “Eradicating it would be a huge error and part of the arrogance of those who don’t perceive life is dynamic.”

But some scientists disagreed — at least as far as Tijuca park is concerned.

“I’m 100% in the camp of taking it out from the park; it’s exotic, we don’t need it, human livelihoods aren’t depending on it,” said Emilio Bruna, president of the Association for Tropical Biology and Conservation. “Outside the park, we can have this conversation.”

PUC’s Oliveira said there’s no doubt ecologically that native species should be substituted for jackfruit in Tijuca park. But in urban areas, it’s free fruit for people who don’t always have access to it.

Further, it’s apparently not as invasive as believed, he said. It becomes hyper-dominant where soil is degraded, but an experiment of his showed seeds didn’t germinate in robust forest.

“A good forest has a certain amount of defense against the jackfruit tree,” he said.

He said populations should be managed through girdling: slicing off a bark ring, which usually kills a tree in months. Abreu said herbicide injection is more effective, and his models indicate killing 5-10% of mature trees annually is enough to put a given population on the decline.

The government’s management plan for Tijuca park says jackfruit eradication should be prioritized; some 2,000 trees were girdled there between 2016 and 2017. It isn’t clear what percentage of the park’s total that represented, Abreu said.

On Feb. 21, cyclists from the safety commission convened at Tijuca park’s entrance. Furtado’s efforts had worked — to some degree. They embraced her proposal to collect and distribute jackfruit to surrounding communities, and decided to present it at the next meeting of the park’s consultative council, where the commission holds a seat.

“We didn’t even know an association that did this existed,” Pazos said after the meeting, standing beside his bike. “There’s no way to dislike the idea of giving food to the population.”

They supported emergency collection by Hand in the Jackfruit, too, but still favored girdling all roadside jackfruit trees. He pointed out that another jackfruit had dropped just downhill, smack in the middle of the road.

Furtado concedes a few roadside trees could be removed as a last resort if collection or pruning proves impossible, and after careful impact study. She vehemently opposes girdling or herbicide, and believes in management through consumption.

“If we eat the jackfruit and their seeds,” she said, “we can contain them.”