I knew something had changed when I got into the cockpit of the 2022 Acura MDX. Sci-fi Drive Mode dial and “trigger” shifter like an NSX supercar. Dash-mounted, driver-centric touchscreen like a Mazda3. Digital dash display like an Audi S6.

This is a performance car dressed as an SUV.

Sure enough, the three-row SUV wanted to take off. Acura had brought me to Hell, Michigan — home of the state’s most challenging roads — to drive the MDX for a reason. I dialed the fat Mode knob to Sport and floored the MDX onto Hadley Road’s twisties, the torque-vectoring all-wheel drive rotating the behemoth into corner apexes. The ute sped ahead with little body roll, its V-6 engine roaring with pleasure as I fed it more gas.

I first experienced the joy of sporty SUVs in the Audi Q7 back in 2015 on California’s own challenging roads — the writhing Route 1 coastal highway. No surprise, the Ohio-made MDX has benchmarked to the Q7 and it shows. The Acura wants to challenge the Germans on the dance floor, which is crowded with entrants from mainstream brands like the Mazda CX-9 and Dodge Durango Hellcat as well.

Call them family utes with a wild side. The world will know just how wild in another year when the MDX debuts its ferocious Type S performance model — a turbocharged, V-6 hellion that promises asphalt-clawing 355-horsepower.

The 2022 MDX is the second SUV to benefit from the “Precision Performance” remake of Acura’s brand. MDX follows the game-changing RDX which, in 2018, debuted a similar offering in the compact class. The new MDX not only shares RDX’s athletic ambitions, it builds on the RDX qualities of standard features and performance.

Of course, most civilians will never flog their family MDX like this insane reviewer, but they will take notice of a large SUV that is noticeably crisper than the last-gen Acura. The steering is more precise, the body roll minimal, the drive more premium. Acura accomplished this with major hardware upgrades like a double-wishbone front suspension (see BMWs) and 50% increased chassis rigidity.

And Acura did it without compromising MDX’s traditional value play. This is the X-factor that has made MDX the best-selling three-row luxury SUV for two decades.

At a starting price of $45,000, the Acura comes loaded with standard goodies including digital instrument display, panoramic sunroof, adaptive cruise control, blind-spot assist, automatic emergency braking, lane-keep assist and a sauna in the rear cargo bay (kidding about that last one).

Compare that to the BMW X7, which doesn’t include the panoramic roof or adaptive cruise in its $75,000 base price — or Cadillac’s XT6, which won’t sell you adaptive cruise until the price pushes $55,000. 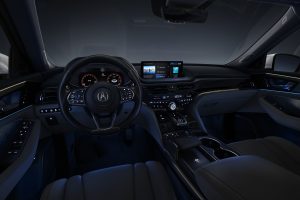 This consumer friendliness is an obsession with Acura (and sister Honda brand). They sweat the small stuff.

MDX is stuffed with X-ceptional details. Honda brands are known for their magic seats — the Honda Fit folding second-row, Odyssey minivan sliding rear seat — and MDX makes a splash with the segment’s first removable rear seat. With two pull tabs, the middle section can turn into a console, a middle seat or even be removed entirely — revealing separate, second-row captain’s chairs. Clever.

There’s a self-washing rearview camera. Sub-cargo storage bay. Wireless Apple CarPlay and Android Auto. Wi-Fi hotspot. “Cabin Talk” feature that activates a microphone so you can talk with rear passengers. An easy-to-adjust head-up display button. A single button that will fold the middle seat, opening easy access to the third row (a usable third row where, say, small adults can feel comfortable). Indeed, the console is as busy as an airline cockpit with buttons for everything — call it the anti-Tesla.

Amidst this ergonomic obsession, the MDX’s biggest shortcoming stands out like a sore thumb: the “True Touchpad Interface” which controls the 12.3-inch infotainment screen. In remaking itself as performance brand, Acura has been comprehensive in transforming everything from exterior design to trigger shifter — but the touchpad is an innovation too far.

In a smartphone world of touchscreens (even Audi has abandoned its remote rotary controller), the touchpad is a driver distraction. It’s best used when stationary — but even then Mrs. Payne found it hard to work from the passenger’s seat as she tried to manipulate Apple CarPlay.

Genesis has similarly designed a difficult remote controller for its new GV80, but the screen has redundant touch control. If Acura insists on keeping the touchpad, it should do the same.

The touchpad also takes up valuable space in the center console, usually a strength of Acura/Honda. The 2022 MDX cuts back on some of the deep console storage space of its predecessor. What it does have is a standard, wireless phone charger which even worked on my huge, 6.5-inch Samsung Galaxy 20 smartphone.

For all of its gym training, the MDX isn’t quite the athlete the Audi is. Flogging both through Hell, Michigan, the Q7 is more sure-footed. And its digital display and touchscreen are state of the art. That Audi standard will cost you, but the Acura is hardly cheap — its amenities adding up to $61,000, just 4 grand short of the Q7 (and turbo-5 Genesis GV80).

The Acura should be looking over its shoulder at the Kia Telluride and Mazda CX-9 — two premium-focused mainstream badges that give Acura a run for the value crown. The loaded Telluride SX boasts premium looks, similar features, and even stuffs a 291-horse V-6 under the hood for a ridiculous $44,000. That’s 3 grand less than MDX’s starting price. The $49,000, turbo-4 powered Mazda Signature trim, meanwhile, will dance with the best luxury cars for just $49,000.

Who knew three-row SUVs could be so much fun to drive? 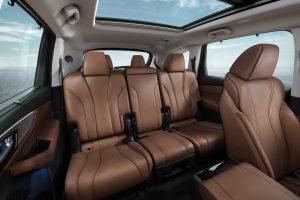