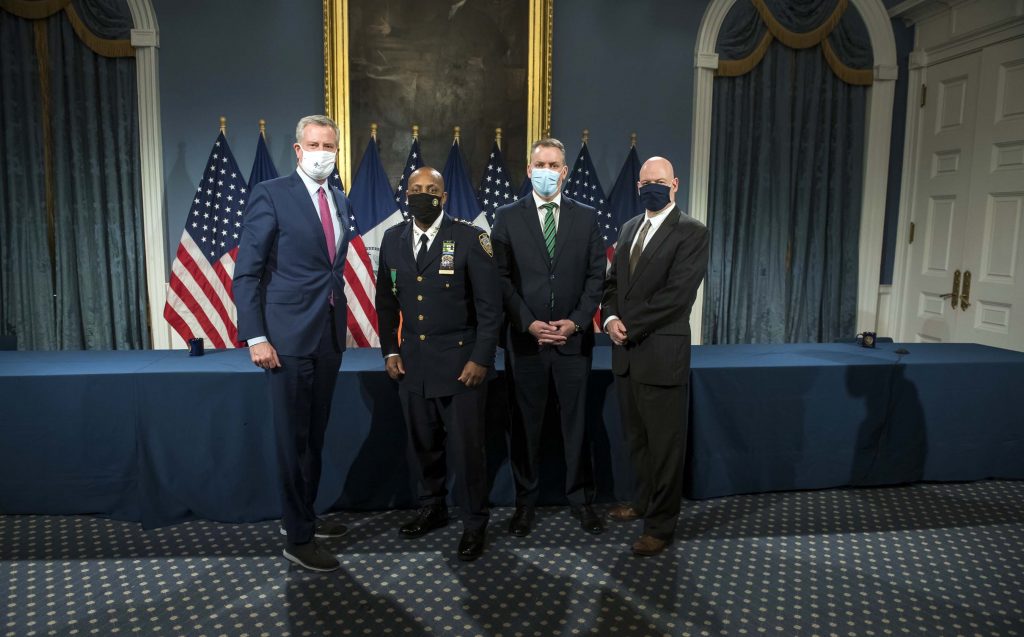 The highest ranking uniformed officer in the New York Police Department is retiring, and will become an advisor to Mayor Bill de Blasio on the city’s recovery from the COVID-19 pandemic.

Chief of Department Terrence Monahan will be replaced by Chief of Detectives Rodney Harrison, de Blasio announced at a press conference Thursday.

In his new role as Senior Advisor for Recovery Safety Planning, Monahan will work with newly announced recovery Czar Lorraine Grillo, interacting with communities, city agencies, and business and nonprofit groups, the mayor said, “determining what concerns need to be addressed, helping us troubleshoot where there are problems, listening to the ideas that we’re hearing from all over the city about how we come back, and how we come back safer.”

Monahan, who will turn 60 in two weeks, has been with the NYPD for 39 years, including the last three as chief of department.

Monahan gained fame during last summer’s Black Lives Matter protests for embracing a protestor, and then taking a knee in solidarity. At a subsequent demonstration on the Brooklyn Bridge, he was one of several officers attacked and injured by protestors.

At the press conference Thursday, Monahan called the past year “the toughest year that I’ve ever spent in law enforcement,” and said, “There is nothing I want more than to see New York like it was just two years ago. And the recovery is going to happen.”

New York City is facing challenges in policing as well as in recovering from the COVID pandemic. After years of reduced crime, in 2020 shootings soared 97% from the previous year, and murders rose 44%. De Blasio has blamed the crime spike on court closures and other “dislocations” related to the COVID-19 pandemic. Police officials including Monahan have blamed these and other factors, including criminal-justice reforms – such as a bail-reform law – supported by de Blasio; a police budget that was cut following demands from Black Lives Matters protestors; and attrition related to both budget cuts and low morale at the NYPD.

“We have to get rid of the perception that this city is not safe,” Monahan said Thursday, “because we really are moving in the right direction and things are coming back.”

Harrison, a 30-year NYPD veteran, has served as Chief of Detectives since 2019, the first black person to hold this position. He had previously served as Chief of Patrol, where he was responsible for carrying out the city neighborhood policing strategy, which was overseen by Monahan.

Harrison grew up in the Rochdale Village neighborhood of Jamaica, Queens, where, he said, he “had negative interactions with law enforcement,” which inspired him to join the NYPD to “make a change.”

In his new position, he said, he will be looking to see “what we can do to continue to make this a safe city and to revive this city once again.”