The Toyota RAV4 has taken over sister Prius’ spot as the best-selling hybrid in the brand’s lineup. Not because it’s greener than the iconic sedan, but because it’s more practical.

On a weekend in which I helped move my son into his Seattle townhouse, green was the least of our priorities.

Happily, my RAV4 tester was everything it needed to be. In so doing it gave insight into the limitations of all-electric vehicles and America’s craving for SUVs. The RAV4’s forefather was the iconic Prius, which put hybrids on the map. It also sold like hot cakes in California because it qualified for $4,000 in state and federal tax breaks — plus free passage to Cal’s coveted high-occupancy vehicle commuter lanes. 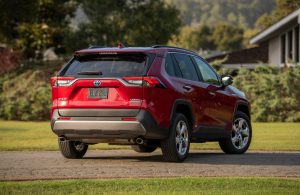 Those benefits are long gone — and Prius must sell as a sedan in an SUV market. Good luck. It’s not hard to see why utes are hot. They are versatile tools in a demanding world like, say, Seattle, where on any given day, consumers need a commuter car, a weekend getaway vehicle or a moving van.

On this weekend we needed the latter with hatchback, cargo bay and roomy rear seats. And no range anxiety.

A wave of all-electric SUVs is coming to challenge the RAV4, including the VW ID.4 and Ford Mustang Mach E. But they are priced significantly higher and they demand plugs to charge their 200- to 300-mile range. My son’s townhouse does not have a fast charger. Oh.

Hybrids are looked down on by greens today because they use gas. But RAV4’s hybrid promised 450 miles range, easy access to gasoline stations if we ran low on fuel, and no range anxiety. At $41,100, we could make back its $1,500 premium over the standard, 27 mpg RAV4 in just three years at 41 mpg. It’s a bargain.

If you can put up with its annoying electric whrrrrr, that is. It’s required at low speeds by the feds (to alert pedestrians of electrified vehicles’ presence under 18.6 mph). It drove my son bonkers. Whrrrrrrrr.

Speaking of annoying, it was nice not to add EV range questions to a moving schedule that included repairman times and plumbing issues: Would we lose range in 30-degree winter weather? Would Seattle’s steep hills suck electrons? Would we be able to find open charger bays? 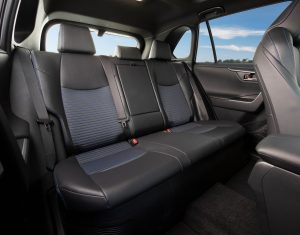 The big-ticket items were first on our shopping list: table and chairs, work desk.

The RAV4’s cargo hold swallowed them all easily. The Costco parking lot was jammed on a Saturday — cash-rich Seattle denizens (their stock portfolios runneth over) are apparently upgrading their domiciles now that COVID-19 has forced them to work at home.

RAV4’s were everywhere in the parking lot (it is America’s best-selling vehicle, after all), and it’s not a bad thing to look at. For the current generation, Toyota designers took inspiration from the Tacoma pickup, and the RAV4 has a rugged, off-roady appearance that helps it stand out in the boxy SUV crowd.

Mrs. Payne couldn’t care less about styling — her focus was on the center console as she hooked up to Apple CarPlay to navigate us around watery Seattle’s tangle of roads. Knob and button touchscreen controls were easy to use (are you listening Lexus?), and the navigation system never let us down as we hopscotched from one retail superstore to the next.

By day we loaded and unloaded boxes, furniture and groceries. The RAV4 has a clever cubby in the cargo hold that helps with fragile items like bananas or eggs. By night we explored Seattle’s culinary scene. In striking contrast to the Prius, RAV4 has lots of rear leg room (38.7 inches compared to 33.4), so even your 6’5” giraffe reviewer could easily take a back seat.

RAV4’s biggest drawback is that we had to shoe-horn it into my son’s garage. It’s a reminder how much vehicles have grown over the years. Fit America’s best-selling F-150 pickup into his garage? Fugeddaboutit.

My son is also in the market for a car. Scratch a compact ute off his list. But the shopping experience convinced him that he needs a hatchback as well as all-wheel drive for when snow hits Seattle’s vertical streets.

And like his father, he has the need for speed. So he’s looking at a hot hatch Mazda3 or VW Golf R that fits his garage. RAV4 may be versatile, but nimble handling is not one of its attributes. 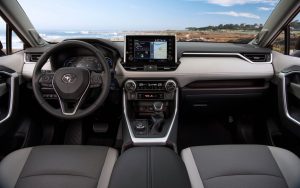