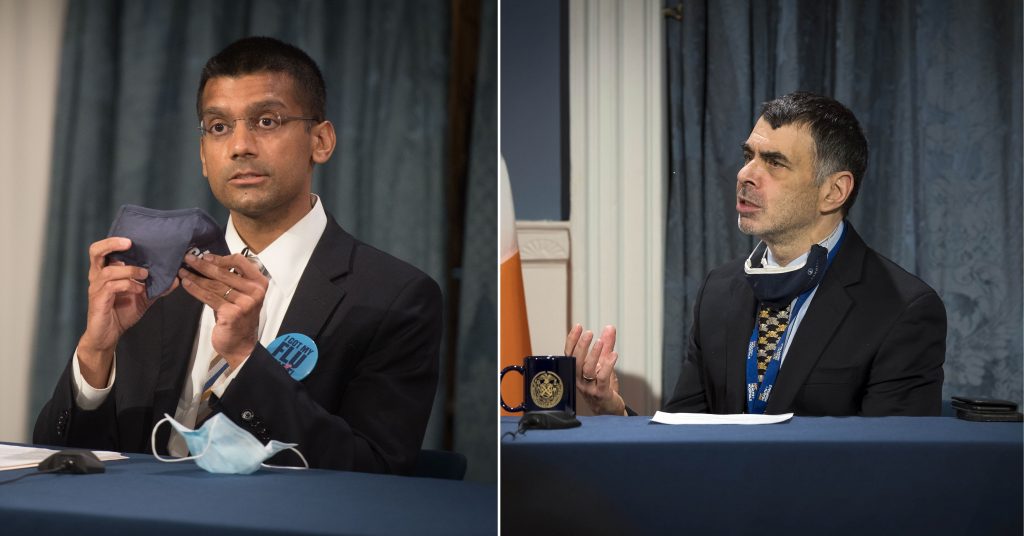 “Even as more people have become infected, and we’re starting to see some immunity being built up from vaccination,” Chokshi said, “we are still not at a point where we can say that there is herd immunity that protects any community in New York City.”

Chokshi’s comments came on a conference call Tuesday afternoon with Jewish media outlets, as the city is conducting outreach to various communities, urging people to get vaccinated when they are eligible.

Dr. Mitchell Katz, President and CEO of NYC Health + Hospitals, the city’s public hospital system, who was also on the call, admitted in response to reporters’ questions that the de Blasio Administration could have done a better job of communication with the Orthodox Jewish community during the pandemic, saying, “While I believe this administration cares very much about the Orthodox Jewish community, we have not gotten everything right.”

Seeking to combat vaccine-hesitancy, Chokshi said, “The two vaccines that have been authorized so far [Pfizer’s and Moderna’s], are safe, they are very effective, and they’re lifesaving. And we know those things based on not just the very large studies that were done of the vaccine, in over 70,000 people across both of the vaccines, but now also the real-world experience of vaccination across the world, particularly with respect to safety.”

Regarding claims of the COVID-vaccine-approval process being rushed, Chokshi said, “The technology underlying the vaccine had been under development for several years. So even though they do represent remarkable scientific breakthroughs, these are things that have been worked on for years upon years, and there were no shortcuts taken with respect to studying the safety and effectiveness of the vaccine. Each of them was studied in clinical trials of tens of thousands of people who were followed for up to two months after getting the vaccination to make sure that we knew about the most likely side effects, as well as the effectiveness of both vaccines.”

As to vaccine opponents arguing that the vaccine may cause infertility, Chokshi said, “We have no evidence from all of those studies and the real-world experience that there is any negative effect on fertility from either of the two vaccines that have been authorized. It is true that we will have to continue following people who have been vaccinated, but based on the information that we have right now, as well as decades of experience with other vaccines, we do not have any evidence or indication that there will be a harmful effect on fertility,” and that “the risk of getting COVID-19 far outweighs any theoretical concerns around fertility.”

New York City has fully vaccinated (two shots) 410,523 residents, and partially vaccinated 365,942. It has also fully vaccinated 140,018 non-residents — such as health-care workers who work in the city but live elsewhere — and partially vaccinated 82,545. Mayor Bill de Blasio has set a goal of vaccinating five million people by the end of June, but has said this will hinge on the vaccine supply the city receives through the federal government and the state. While there are currently many more people who wish to be vaccinated than vaccine supply available, officials are working to combat vaccine-hesitancy in the goal of ultimately vaccinating all New Yorkers.

The conference call was the latest of several that health officials have had with various ethnic media outlets and community leaders, in an effort to promote vaccination. Chokshi said that during the past two months, health officials have had 15 sessions with representatives of the Jewish community, including rabbis and organizations including Hatzalah, Agudath Israel and the Jewish Community Relations Council, “who have welcomed that engagement and who have been really critical for us to ensure that we’re responding to what their community members are asking them.”

The Pfizer and Moderna vaccines require two doses for optimal immunity, but provide some level of immunity after a single dose. Considering the vaccine-supply shortage, some have argued that governments should be prioritizing giving single shots to a larger portion of the population, rather than two shots to those currently eligible for the vaccine, such as the elderly, those with comorbidities, health-care workers and other essential workers. Asked about this by Hamodia, Chokshi replied, “There are different approaches with respect to using single doses of the vaccine or delaying the second dose. We have to ensure that we’re doing things in a way that is guided by the most rigorous science and also following the FDA with respect to how the vaccines are being authorized. I do know that our colleagues at the FDA and the CDC are taking in all of this new evidence and considering whether there are any changes that should be made.”

Another vaccine, produced by Johnson & Johnson, will be evaluated by the FDA later this week, and may be approved as just a one-dose regimen. Officials are hopeful that this will speed up the vaccination process.

In the meantime, for the next several months, officials are recommending that people who have been vaccinated follow precautions such as wearing masks. At de Blaiso’s press conference earlier Tuesday, Chokshi noted that there was concern about the new COVID variants, and that the vaccines don’t reach full efficacy until some time after the second shot is administered. He cautioned that the vaccine shouldn’t be viewed as an immediate guarantee of immunity, saying, “We have to think about it as something that is an additional layer of protection to all of the things that we know have already worked, and that includes mask wearing,” and that “even after you’ve been fully vaccinated and have full immunity we don’t know enough about the spread of the virus, even when someone doesn’t experience symptoms after they’ve been vaccinated. And for all these reasons, it will remain important for us to keep wearing masks in the coming weeks and likely in the coming months as well.” De Blasio said at the press conference that “June is the earliest we would even consider changing guidance around masks.”

Chokshi said on the conference call that the city is “actively looking” into the possibility of “vaccination passports” that would grant allowances to people who have been vaccinated, but that “I think it’s premature for us to be able to move in that direction, in the next few weeks.”

Katz struck a hopeful note as the conference call concluded, saying he looks forward to the day when large gatherings can return. “I think there’s lots of reasons to hope that the world is going to return to normal,” Katz said, “even if we don’t know exactly when.”