In a culture where nonconformity is the only conformity, and coarseness is trendy, trendiness sells. So it’s no surprise that Nissan’s most popular product is the Nissan Rogue, at least if you consider its name. Yet there’s nothing rogue about it. Its popularity stems from the market segment in which it competes: compact crossovers.

Since its launch in 2007, annual sales climbed from 17,808 to more than 350,000 last year, though that’s down from more than 412,000 in 2018. But Nissan could easily beat those numbers with the newest iteration of the Rogue, as it endows its allegedly uncouth CUV with an impressive dose of sophistication, making it a far better value proposition than the model it replaces.

The Rogue’s fresh wardrobe is boxier than the softer one it has worn for seven years. Its new body is 1.5 inches shorter and 0.2 inches lower than the previous-generation Rogue, and Nissan now offers the Rogue in five two-tone combinations. The Rogue’s crisp beltline and dashingly angled greenhouse suggests speed, which is accented by blacked-out windshield pillars, a large chrome “V-Motion” grille surround, LED lighting, and the perfect amount of bright side trim. Its appearance is a bit more truck-like, but with sufficient sportiness and sophistication. 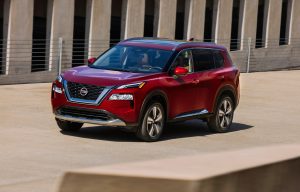 That’s particularly true of the cabin, which feels far better crafted than any other Nissan in recent memory. Its quality stands apart in a crowded segment, and its design is functional and easy to use without being flashy. Instead, you’ll find its materials seem upmarket, while its technology is state-of-the-art. Rogue now offers wireless Apple CarPlay, a large wireless smartphone charger, USB Type-C and Type-A charging ports, a full-color 10.8-inch head-up display, 12.3-inch digital gauge cluster and a large, nine-inch touchscreen that houses navigation, audio controls, climate information, Google Maps, Waze, a rearview monitor and an optional 360-degree monitor. The screens graphics are clear and easy to use, and its two large tuning knobs and shortcut buttons enhance the system’s ease of use. Kudos to Nissan for doing what Toyota and Honda find impossible: making a touchscreen system clear and easy to use.

Nissan’s naturally aspirated engine isn’t turbocharged like some of its competitors, yet it still provides a seamless flow of power, with the CVT providing timely shifts that lack the indecisiveness nature so typical of CVTs. Then again, it doesn’t tempt you to overindulge, to eagerly gun it and revel in the joy of driving. But its steering is quick, inspiring confidence as the Rogue grips the road with authority. Its self-assured demeanor is enhanced by the quiet cabin and a comfortable ride that were impressive. While not sporty in character, its mainstream attitude is appealing.

The seats are roomy and comfortable in both rows, and there are ample places to stash things. The rear cargo hold is similarly spacious, despite giving up three cubic feet to the 2020 model. S and SV models come with cloth seat trim, although leatherette is optional on the SV. SL and Platinum models wear leather upholstery, with the latter getting semi-aniline skins with diamond-quilted stitching. Other niceties include a panoramic glass roof, three-zone automatic climate control, heated front seats, and a heated steering wheel.

It makes an extraordinarily impressive update to a vehicle that has never stood apart from the crowd. Now, its vast range of capabilities make it far more competitive with the best compact crossovers in the class, and one you must drive. No, it’s not sporty, but extremely proficient no matter what you ask of it.

It may not be a rogue, but this Nissan is a strikingly updated Rogue. 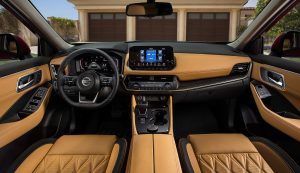