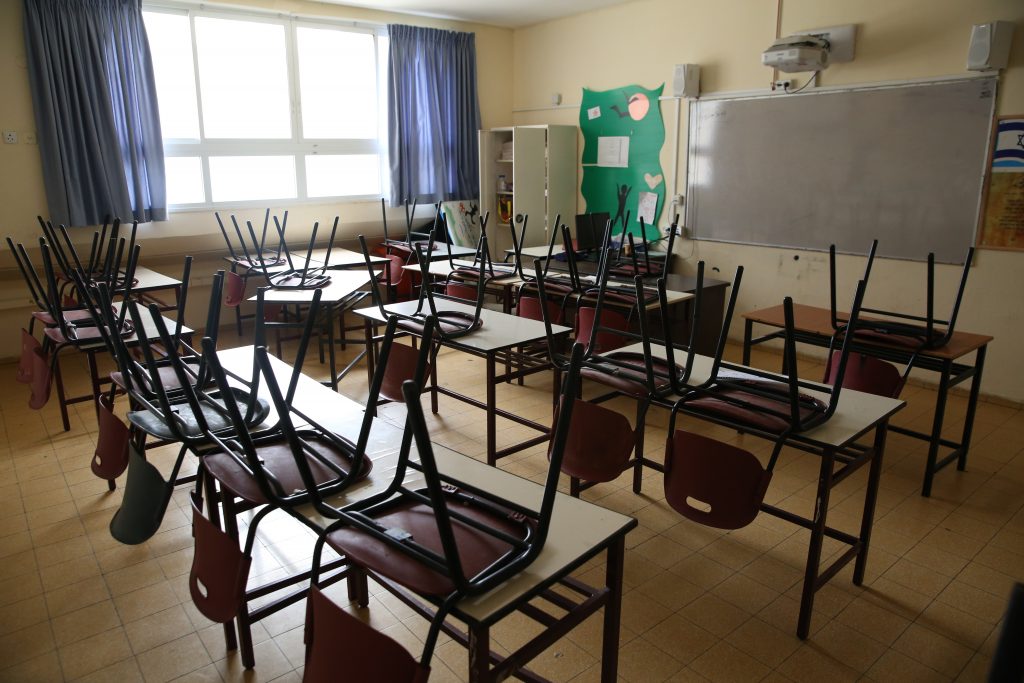 Seventeen local authorities announced Sunday that they will resume in-person classes later this week for grades 7-10, in defiance of government orders and coronavirus restrictions.

These grades are the last age group to remain at home, and are still studying remotely.

The cities that intend to flout the order and resume classes on Wednesday include Ashdod, Be’er Sheva, Givatayim, Herzliya, Hadera, Holon, Haifa, Kfar Saba, Netanya, Petah Tikva, Rishon LeTzion, Rechovot, Ramat Gan, Ra’anana, and Tel Aviv. They are home to about half the population of the country.

The government has barred the students from classrooms until at least March 9. Schools have been largely shuttered in Israel for much of the past year.

The authorities said in a statement they had decided to open “in light of the ongoing absence of these students from schools, and the severe educational, social and psychological impact.”

The mayors of the 17 localities had convened to make the decision on Sunday, the statement said. Students in those areas are set to attend class at least twice a week, for four hours each day, or three times a week for three hours.

The mayors said they will not pressure teaching staff to work if they do not want to.

In an interview with Army Radio, Givatayim Mayor Ran Konik said that it isn’t “a rebellion” but it is the authorities “taking responsibility.”

“The people have lost faith, for me it’s a kind of war. It is more dangerous for children not to be in schools. What of the two is better, that they walk around the malls or that they return to some form of sanity?”

Herzliya Mayor Moshe Fadlon, also one of the initiators of the move, explained: “We are in a national emergency, and the mandate given to us by the government is mine. I also have the responsibility and authority in matters of education, cleanliness, health and safety.

“We can’t put ten students in a class?”

He added: “We are opening the entire education system on Wednesday, despite the government’s decision. We understand that Harav Kanievsky was right in his decisions, I have no problem saying that. It is true.”

The Teachers’ Union opposed the move, saying, “The sole employer of teaching staff in Israel is the Education Ministry, and only it has the authority to decide on openings and closings in the education system.”

Infection rates among children and school reopenings are a central concern during Israel’s third-wave virus outbreak. Children represent a larger proportion of infections than earlier in the pandemic, possibly due to the new virus variants and the fact that a significant share of adults have been vaccinated.

The vaccine has not yet been approved for children under 16, although Israel has vaccinated dozens who suffer specific risk factors. No serious side effects were reported.