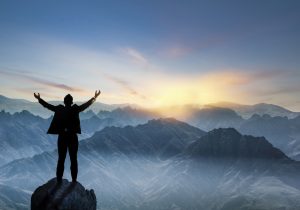 Hashem spoke to mankind once. One might think He would give an inspirational talk. Maybe a complex shiur. He was speaking to the Dor Deah. The greatest.

Imagine if a speaker would be brought to inspire people during Aseres Yemei Teshuvah. He rouses them, and tells them, okay, now, let’s be mekabel not to violate arayos! Let’s not murder. We would be indignant. Us?! Is that where we’re holding?! Rav Shach asks — this is the one and only time Hashem spoke and He instructs us not to murder?! Not to do arayos?!

He answers, Hashem was giving us the greatest life lesson. Without Torah, we, as human beings, can be depraved. We see the most cultured nation became the greatest depraved murderers in history.

Much ink has been spilled over the recent riots at the Capitol. An impeachment resulted. Was the President to blame? His middos don’t seem to be impeccable. He doesn’t have the vaccine.

How would we have fared in his shoes? How do we fare when we contend with our own issues? And we have the vaccine — the Torah tavlin.

Are we running to vaccinate against the pandemic?

We are in a devastating pandemic, but one which is visible. Billions of people are affected. Yet, we are not masking ourselves, not maintaining safe distances and not quarantining. We even have the vaccine which is readily available.

Wherever we go, wherever we turn, we are inundated and affected. We may not even be aware that we have the symptoms. We are swamped with this deluge of advertising. Whatever we open, Olam Hazeh screams at us. Food, furniture, cars, strollers, homes … (even in Artzeinu hakedoshah). Don’t forget — marketing is a science — companies pay big money because it works! We walk into food stores. The opulence of the store, the size, the array of foods, all work their magic on our senses.

Harav Yerucham Levovitz, zt”l, Mashgiach of Yeshivas Mir, explains in Parashas Nitzavim the need for a bris. The exposure Bnei Yisrael had to the detestable avodah zarah was enough to require their getting another bris! Certainly, marketing — which employs the greatest forms of attraction — will leave indelible impressions. Just being exposed to any attractive Olam Hazeh will have an impact.

We are in the throes of the second wave of the pandemic. Prior to COVID, we were overwhelmed wherever we looked with the excessive indulgence in Olam Hazeh. Now, we’ve added our infatuation with — of all things — Dubai!

I heard from Harav Yankel Katz, at our annual Elul Yom iyun in Telshe — When Yaakov met Esav, Esav asked him, “All this vast wealth is Olam Hazeh — that’s mine — how do you come to this?” Yaakov answered, “This is the vehicle to Olam Haba.”

If it is for the purpose of this world — then it is Esav’s. If it will get you to Olam Haba, then it is yours.

At the time, I happened to be looking for a minivan. We had an option of one without arm rests, and we travel long distances. When he was saying this vort, he applied it to our daily living. He was actually saying this line looking at me (not knowing that I was in the parashah) and saying, “When one buys a car — does he need every “pichifka?” It’s just a vehicle to take him from point A to point B! If he needs every “pichifka — then that is Olam Hazeh!” Needless to say — we bought the van without the arm rests!

We wear masks. Someone explained that it actually makes a difference which way you wear it. One way protects you. The other protects the people you encounter.

A gvir was building his mansion. He was outside in discussion with the exterior designer. Someone walked by and offered his advice “Farb es bloi — Paint it blue.” The gvir turned to him in ire. “Mind your own business!” He responded, “I am. Why are you painting it? For the people passing by. That’s me. I like blue!”

The whole world panics with the fear of the pandemic and is clamoring for the vaccine. We have to panic from the spiritual pandemic that is subtly and not so subtly contaminating us.

The power of our vaccine is readily accessible — be it the study of the classic mussar sefarim, be it pesukim of the Torah. It is told about the Brisker Rav that he used to say pesukim of bitachon when confronted with natural feelings such as jealousy, gaavah, taavah. We too can implement the vaccine. I once heard from Harav Mordechai Schwab that when one is aware of an upcoming challenge that he knows could have adverse results, he should mutter a tefillah to Hashem, “Hashem, save me!”

Harav Mordechai Rennert, zt”l, was grimly informed by a doctor of his prognosis; he had four more weeks to live. Seeing no reaction, the doctor thought it didn’t register. He once again gave the dire prediction. Again, no reaction. Puzzled, the doctor asked Rav Rennert why.

The Rav explained that an astronaut is very uncomfortable in his cumbersome space suit. As soon as he can, he removes it. “So too,” explained Rabbi Rennert, “I am presently in my earthly suit. When the time comes it can be removed.”

Rav Rennert was a person who lived for others. He once had an unmarried talmid who was not able to fare for himself. Rav Rennert would come to his apartment and do his dirty laundry! His son said that it all came from learning Mesillas Yesharim so many times.

The Mesillas Yesharim writes in the beginning that man is created for the ultimate pleasure, basking in the radiance of Hashem in the most appropriate location crafted — Olam Haba. We are placed in the greatest challenge of attaining the ultimate, having been placed here to reach our goal. We must vaccinate to protect ourselves. And we must set our GPS to our final destination (if we get sidetracked — it will recalculate) — as we implore Hashem every day in davening — shenishmor chukecha baolam hazeh, v’nizke venichye l’yemos haMoshiach u’lchayei ha’Olam Haba!

Rabbi Yelen is the Rav of Congregation Yagdil Torah.