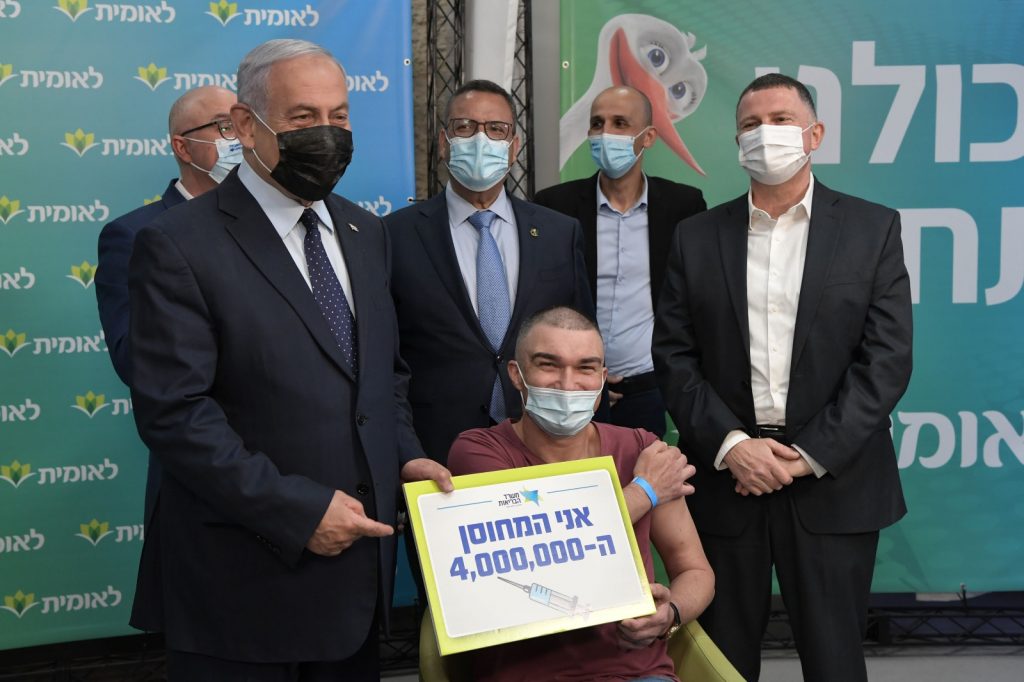 The figure represents 44 percent of the total population who have now received the first of two doses of the vaccine, leaving about 1,996,000 eligible Israelis who have not yet received any dose.

Some 3 million Israelis are not eligible — either because they are under 16, or because they have recovered from the illness and are not currently prioritized, or for other reasons.

Prime Minister Binyamin Netanyahu and Health Minister Yuli Edelstein were on hand for the four millionth shot, received by a young man at the Leumit Health Care Services vaccination facility in Yerushalayim.

“I would like to appeal from here to the 570,000 people over 50 who have yet to be vaccinated. Almost 100% of the deaths and severe cases are concentrated in this group,” Netanyahu said, reiterating the call he made the day before.

“When you do not go to be vaccinated because of this small jab, which is insignificant — in the worst case the side effects are a few hours’ discomfort — you take upon yourselves the risks of death and severe illness with effects that could be for life.”

Seeking to reach those older Israelis at risk of the coronavirus, the Health Ministry is advancing a proposal give local authorities access to data enabling them to contact them and urge them to get their shots.

However, Attorney General Avichai Mandelblit has warned such legislation raises privacy concerns, and may not pass legal scrutiny.

Meanwhile, the World Health Organization said Monday that only around one percent of the Middle East population had received a first coronavirus vaccine shot, excluding Israel.

The UN body released its data for what it calls the Eastern Mediterranean Region (EMRO) of nearly 600 million people, stretching from Morocco to Pakistan.

“So far, more than 6.3 million doses of COVID-19 vaccines have been given to people in 12 countries,” Ahmed al-Mandhari, the Cairo-based WHO’s regional chief, told reporters.