Firefighters from the Israel-Jerusalem District rescued several people trapped in fires that broke out in quick succession in Yerushalayim.

At approximately 7:00 pm Tuesday evening, four rescue units firefighting teams were rushed to Sari Israel Street in central Yerushalayim following a report of smoke coming out of an apartment.

After entering the building, firefighters rescued a tenant who was seriously injured in the fire and transferred him to the medical care of MDA Jerusalem paramedics. As they were tending to the injured, firefighters got the fire under control and prevented it from spreading. 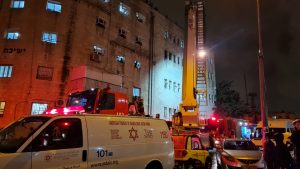 Forty minutes later, firefighters from the Uma area were rushed to a blaze on the third floor of a yeshiva on Rechov Grossberg Street in Jerusalem.

The crews immediately rescued a man, and he was transferred while he was still conscious to the medical care of paramedics of MDA Jerusalem, where he was reported in good condition.

An investigation has been opened to determine the circumstances of both fires.