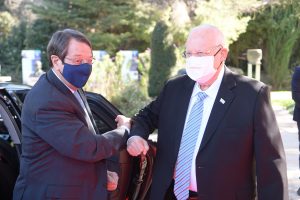 Cypriot President Nicos Anastasiades was in Yerushalayim on Sunday to finalize an agreement for Israel and Cyprus to recognize each other’s “green passports,” enabling vaccinated citizens to travel without restrictions between the two countries.

Anastasiades met with President Reuven Rivlin in the morning and was scheduled to talk with Israeli Prime Minister Binyamin Netanyahu‏‏ and Foreign Minister Gabi Ashkenazi later in the day.

They took turns hailing the travel agreement, while Rivlin took the opportunity to condemn the decision of the International Criminal Court to investigate Israel for possible war crimes against Palestinians.

“We still see how some international institutions are being hijacked for political purposes. Today, the Palestinians are using the International Criminal Court, which was established to deal with the world’s worst crimes, as a political weapon against the State of Israel. I would like to take this opportunity to call on all states to reject these efforts to involve the ICC in a political conflict,” said Rivlin.

While Rivlin also thanked the Cypriot visitor for his country’s support of Israel in international forums, an official statement of the meeting did not quote any comment from the latter on the ICC.

Anastasiades said, “When the world is in upheaval because of corona, the warm relations between our two countries are more important than ever. I would like to express my deep appreciation for Israel’s support of Cyprus at this difficult time.”