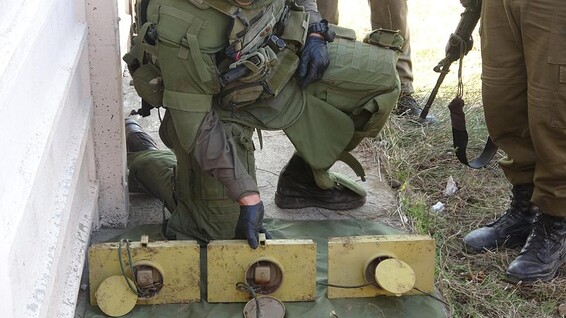 An explosive device on the Israel-Syria border placed by local residents likely working for Iran’s infamous Quds Force was neutralized by the IDF, as revealed in an exclusive report by Yisrael Hayom.

Under cover of darkness, the terrorists placed an explosive 25 yards from the security fence separating Syria from Israel. Their retreat into Syria was followed by IDF spotters. Yahalom sappers then disarmed the explosives, using highly sophisticated tools.

“The area is of great strategic importance,” Brig. Gen. Ze’ev Cohen told Yisrael Hayom, “among other reasons because there’s a tremendous lack of goods on the other side and a real struggle to live, to the point of having no food. There is complete chaos there and every fighting force is trying to gain a foothold in the area. Terrorist elements are trying to recruit these poor people to act against us, which was also the case during the incident in question. In hindsight, we understand that those who placed the bombs are residents of the area, proxies of Iran. It’s clear to us that Unit 840 of the Quds Force dispatched them.”

A source who revealed the information to the website said the operatives seized information and documents about the activities of the Quds Force in Syria and plans against Israeli targets.