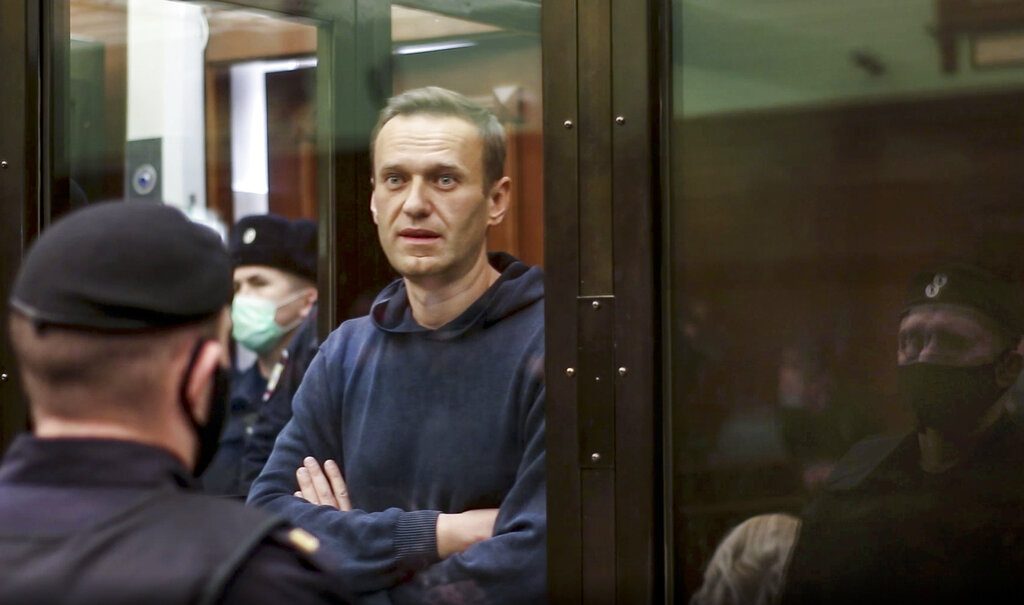 Russian authorities on Wednesday shrugged off the massive rallies against the jailing of top Kremlin foe Alexei Navalny and rejected Western criticism as “hysterics” as activists reported more than 1,400 new arrests in the crackdown on protesters.

A Moscow court on Tuesday ordered Navalny to prison for two years and eight months, finding that he violated the terms of his probation while recuperating in Germany from a nerve-agent poisoning. The ruling immediately ignited new protests in Moscow and St. Petersburg that followed massive rallies over the past two weekends.

Speaking in court, Navalny denounced the accusations against him as fabricated and driven by President Vladimir Putin’s “fear and hatred,” saying that the Russian leader will go down in history as a “poisoner.”

Asked to comment on Navalny’s speech, which was shared widely on Russian social media platforms, Kremlin spokesman Dmitry Peskov responded that it’s not up to him to determine Putin’s place in history. Like Putin, Peskov avoids mentioning Navalny by name.

Navalny, a 44-year-old anti-corruption campaigner who is Putin’s most determined political foe, was arrested Jan. 17 upon returning from his five-month convalescence in Germany from the poisoning which he has blamed on the Kremlin. Russian authorities deny any involvement and claim they have no proof that he was poisoned despite tests by several European labs.

Navalny’s wife, Yulia, who attended the hearing, thanked supporters on social media, saying “there are so many good, strong and fair people who support Alexei and myself that there is no way to step back and there is nothing to fear.”

“We will win anyway,” she said.

In addition to imprisoning Navalny, authorities put his brother and several close associates under house arrest. Police also have detained scores of journalists who covered the protests.

On Wednesday, a court sentenced Sergei Smirnov, the editor-in-chief of Mediazona, a top online news outlet focusing on political repression and human rights abuses, to 25 days in jail on charges of making calls for unsanctioned protests. Smirnov denied the accusation.

U.S. Secretary of State Antony Blinken urged Moscow to immediately free Navalny and those who were detained during protests.

“Even as we work with Russia to advance U.S. interests, we will coordinate closely with our allies and partners to hold Russia accountable for failing to uphold the rights of its citizens,” he said.

“A political disagreement is never a crime,” Macron. “The respect of human rights, like that of democratic freedom, is not negotiable.”

Seibert told reporters that the Moscow court’s ruling “was far from the principles of rule of law,” noting that it was based on Navalny’s earlier conviction, which the European Court of Human Rights had deemed “arbitrary” and a breach of Navalny’s rights to a fair trial.

“The German government condemns this systematic use of violence against peaceful protesters,” he said.

Russian Foreign Minister Sergey Lavrov on Wednesday rejected the Western demands as “arrogant and improper,” saying that Moscow will not be moved by Western “hysterics.”