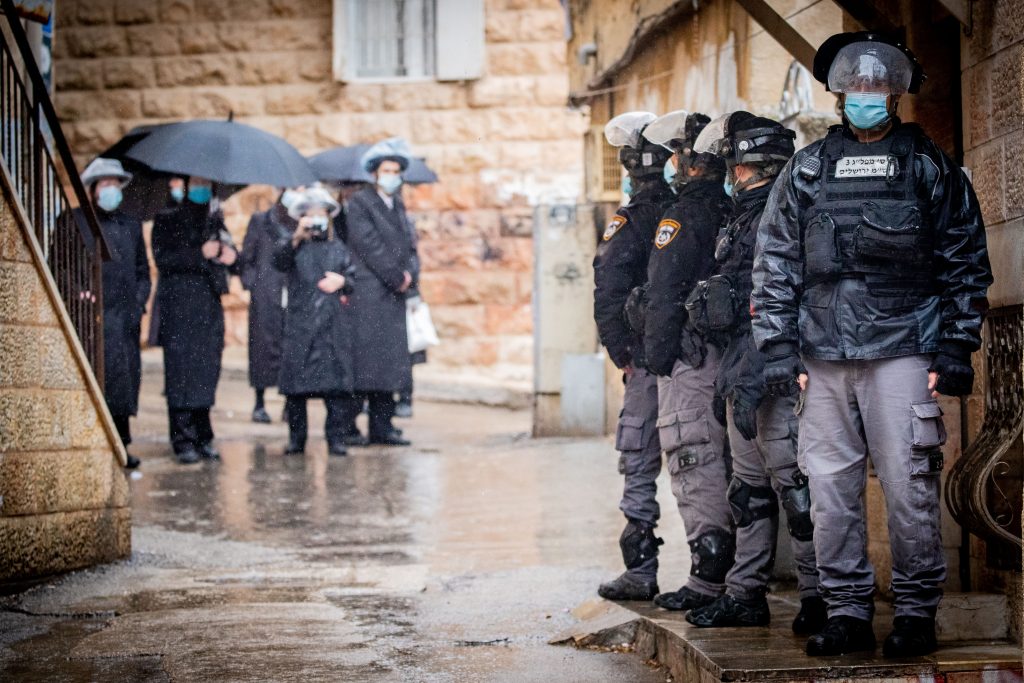 In over 2,000 years of galus a prime spot in the public eye has never been a particularly safe place for Klal Yisrael. Even when this attention was shown for the best of reasons, jealousy and ill will were rarely long in following. Even more precarious were the periods of hostility, as the Jewish role in the crisis (real, imagined, or exaggerated) quickly became a prominent part of the narrative.

Unfortunately, the novel coronavirus pandemic has made the actions of what some label “ultra-Orthodox” Jews a perennial media subject.

An item that has received a great deal of attention, even among those who are not regular readers of the New York Times, was an unusual photo on the front page of its weekend edition of Hagaon Harav Chaim Kanievsky, shlita, with an accompanying article on the Gadol’s influence over much of the chareidi community in Eretz Yisrael and beyond, and his perceived role in communal attitudes to pandemic-related laws.

Its headline “He Is Israel’s ‘Prince of Torah.’ But to Some, He Is the King of COVID,” basically says it all. By most accounts, the Times’ treatment of the subject — and its attempt to present both the secular and religious perspective — was not awfully unbalanced. Yet an article on a Gadol Hador that meets journalistic standards of neutrality is still a grave injury to kvod haTorah and raises the question, why is Rav Chaim Kanievsky on its cover in the first place?

Since almost the first months of the pandemic, the media in Eretz Yisrael, America and Europe have focused on what is an understandably odd phenomenon: a conspicuous group of people whose behavior often seemed out of step with broader society’s attempts to control a unique and dangerous health challenge.

Over the past year, there have been a series of touchstones: a large levayah in Williamsburg during the initial lockdown, standoffs in Boro Park “red zones” over Sukkos, and a handful of large communal events that attracted attention in the media. (Not noted in the media ever was the painful lack of a public levayah for the venerated Novominsker Rebbe, zt”l, who was niftar at the height of COVID. Tens of thousands of Jews would have attended; instead, the family chose to limit even close family members.)

A club of Jewish opinion writers who have had the Orthodox community in their crosshairs for decades began to use the pandemic as a convenient means to awaken old animosities as soon as the initial shock of the pandemic wore off. They have since not slackened.

They, like nearly all of the secular news media, seek to explain the phenomenon they see with theories about the community that play into convenient negative stereotypes of what they present as an insular, ill-educated, group that lives by its own laws exclusively.

Few took the time to realize that whether their ideas even play any role at all or not, they pale in comparison to the overriding cause: the simple fact that in major Orthodox centers, nearly or more than half of the people contracted the virus in its initial outbreak. As reinfection has remained an uncommon occurrence, there are obvious challenges to keeping such communities “socially distant.”

None of this is surprising. Since the days of the secularist Jewish press of Warsaw and Vilna, opportunities to take target practice at Torah Jewry seem endless.

Still, there are aspects of the present situation that deserve Klal Yisrael’s consideration.

It cannot be overstated that irrespective of whether the government or press treats Orthodox Jews fairly or not, the realities of a pandemic that causes sickness, hospitalizations, and deaths, R”l, must be dealt with. At this point, the public is well aware of ways to reduce risk, and each community has its own Rabbanim who advise them on the course to take. And the risks are great not only in the U.S., but in many major communities around the world.

Will mass vaccination succeed in restoring health, prosperity and security to society, and also eliminate the social tension and animosity? Perhaps. But there is another grave threat that vaccines will not fight. And we cannot pretend it doesn’t exist.

Before the pandemic hijacked public attention, violent and deadly attacks on Jews exposed the severity and multi-faceted nature of the anti-Semitic threat faced in America. The hatred that drove attacks in Pittsburgh, Poway, Jersey City, Monsey, and the streets of Brooklyn have not gone away. After these tragedies there was at least an outpouring of sympathy from elected officials and most of mainstream society and a renewed commitment toward protecting the Jewish community. Now, the attention to indiscreet non-compliance to COVID guidelines has made much of the Orthodox community a fairer-than-ever target in official circles as well.

Worse yet, this flash point is only exacerbated by increased economic, social, and political tension that has stirred up widespread riots like last summer’s anti-police violent demonstrations and the more recent attack on the Capitol.

One need not be too keen an observer to feel as if the Orthodox community is sitting atop a powder keg. In such a volatile situation, each individual and community is obligated to carefully consider and weigh the ramifications of every action and statement, especially in an age of social media where photos and news spreads like lightning.

We want to be sure that our hands are clean.