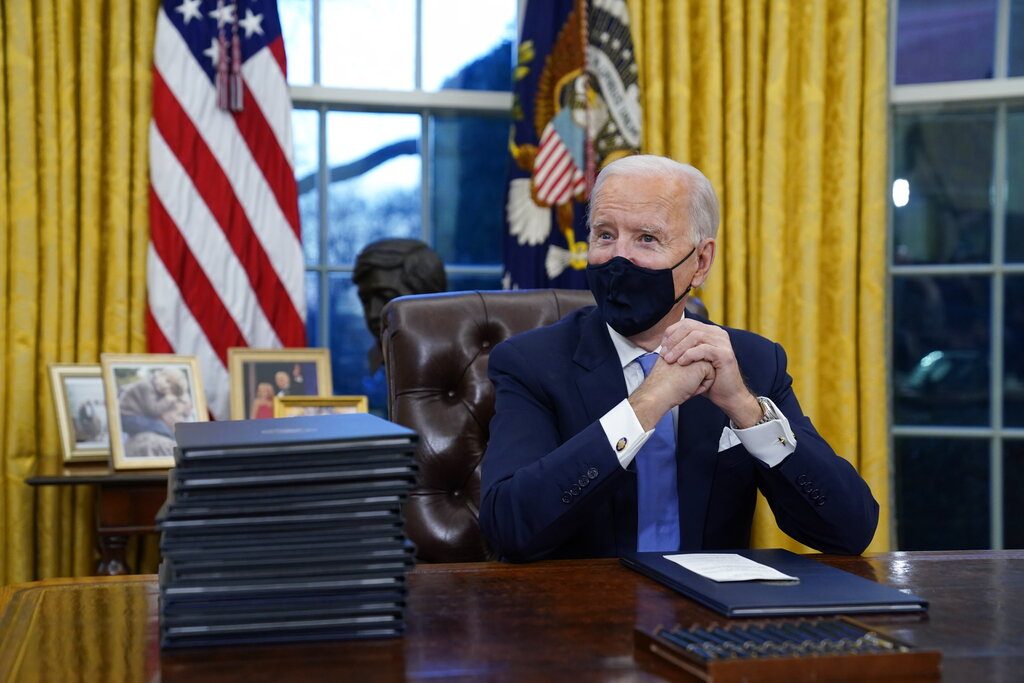 Joe Biden’s presidency began at a choreographed sprint, with a series of executive actions to erase Donald Trump’s legacy and reset the nation’s course. But as his first full week in office came to a close, the new president was discovering the limits of his power.

His administration’s efforts to bolster vaccine production ran into the same hurdles that plagued the Trump administration — bottlenecks both at factories and in clinics — and Biden’s advisers had to clean up after the president said any American would be able to get inoculated by the spring.

He’s meanwhile encountering familiar roadblocks in Congress, where just four of his cabinet nominees have been confirmed 12 days into his presidency, and he’s found no traction among congressional Republicans for another big stimulus bill.

The White House has denied reports it’s willing to break the $1.9 trillion proposal apart in a bid to secure Republican votes, leading Democratic leaders in the House and Senate to figure out what they can pass with budget tricks and 50 votes.

The Senate is distracted by Trump’s coming impeachment trial, while in the House, Democrats now regard many Republicans as something worse than mere political opponents, after the deadly Jan. 6 Capitol riot by the former president’s supporters.

Washington gridlock is nothing new for a president who spent most of his adult life in the city, and there’s no arguing that Biden’s White House is already a smoother, more predictable operation than Trump’s ever was. But while the president insists the country faces a mosaic of health, economic and climate crises, Congress is not exhibiting the same sense of urgency.

“We are confident we’re still on a pretty rapid pace here,” White House Press Secretary Jen Psaki said, adding that Biden had spoken to lawmakers directly “about the urgency of getting things done.”

“And I will say, in those conversations, there is an understanding and agreement about the urgency of addressing these issues,” she continued. “So, no, we’re actually pretty hopeful and optimistic about the opportunity and the ability to work with Democrats and Republicans to get packages through to help bring relief to the American public.”

Congress isn’t the only front where Biden is challenged. While the president’s supporters were thrilled by his flurry of Day One executive orders – including a federal mask requirement, abolition of Trump’s travel ban on some predominately Muslim countries, and rejoining international institutions including the World Health Organization and the Paris climate accord – many regulatory changes face the prospect of heavy litigation.

The administration already suffered a legal setback. The president’s order to halt deportations of undocumented immigrants for 100 days was itself halted by a federal judge in Texas this week, who granted the Republican-led state a nationwide injunction — the same tactic Democratic plaintiffs repeatedly used against Trump, to the outrage of conservatives.

The White House delayed further immigration policies, including a plan to reunite migrant families separated at the U.S.-Mexico border under Trump’s policies. White House Chief of Staff Ron Klain had promised in a pre-inauguration memo that the policy would be unveiled by Feb. 1.

Psaki acknowledged the immigration announcements were delayed because Biden’s nominee to lead the Department of Homeland Security, Alejandro Mayorkas has yet to be confirmed. The Senate is scheduled to vote on his confirmation Monday.

Thanks to the president, Obamacare marketplaces will reopen beginning Feb. 15 for Americans without insurance; the nonprofit Kaiser Family Foundation estimates they may attract millions of customers.

Biden has blocked international travel from some coronavirus hotspots to try to slow the spread of dangerous new variants of the disease; halted construction of the Keystone XL pipeline, regarded as a looming climate disaster by its opponents; and lifted a ban on military service by openly transgender people.

Yet there are signals the White House may already be scaling back its agenda – or at least postponing major pieces as it confronts a coronavirus pandemic that’s far worse than Biden or his top aides had anticipated on Election Day.

Despite promises to deliver tax reform, gun control, an overhaul of the criminal justice system, and health care legislation, Biden has so far focused his Capitol Hill efforts on the recovery package. Environmental interest groups described disarray around the rollout of executive orders, while White House officials begged patience to craft additional actions.

“Give us a little something to do over the next few days,” quipped domestic policy adviser Susan Rice.

There were also external indications that Biden’s honeymoon period could be waning. With unemployment figures steadily high, fourth quarter gross domestic product below economists’ expectations and markets roiled by the frenzy over GameStop Corp., the benchmark S&P 500 index closed down Friday more than 3% from a week before.

The havoc around GameStop and other heavily shorted stocks such as AMC Entertainment Holdings Inc., produced by retail investors who seek in part to embarrass and punish wealthy hedge fund managers, illustrates the deep populist class and political divides Biden will eventually have to navigate in his bid to unify the country.

The divisions were driven further home by a rare Department of Homeland Security bulletin, which warned that anger “fueled by false narratives” – including unsubstantiated claims of fraud in the 2020 presidential election – could prompt “ideologically-motivated violent extremists” to launch attacks.

The White House announced that the director of National Intelligence would be conducting a “comprehensive threat assessment” of violent extremism in the wake of the Jan. 6 ransacking of the Capitol by Trump supporters.

There are more clouds on the horizon in foreign policy.

Biden had hoped that Iran might return to compliance with the international nuclear deal struck during the Obama administration as a show of good faith to the new president. Instead, Tehran said the U.S. must remove Trump-era sanctions by Feb. 21 or it will suspend United Nations inspections of its nuclear sites.

The situation left the U.S. a “long ways” from rejoining the agreement itself, said Secretary of State Antony Blinken, one of Biden’s four confirmed cabinet members. “We’re not there yet, to say the least,” Blinken added.