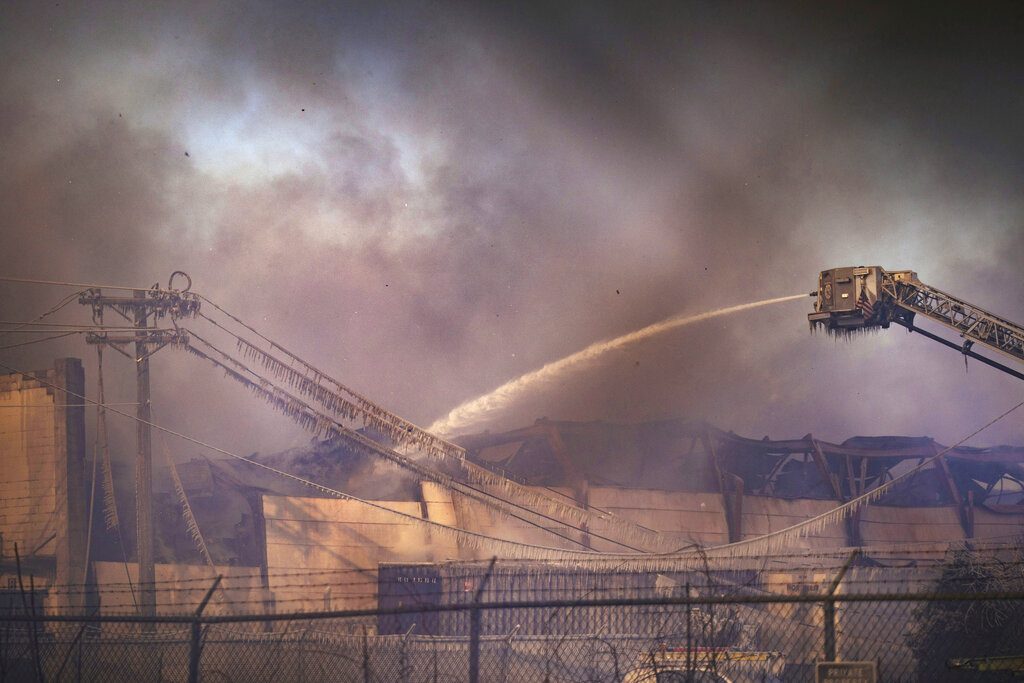 A huge fire engulfed a recycling plant overnight in northern New Jersey and raged into Saturday as firefighters battled flames, wind and frigid cold that turned the water from their hoses into treacherous ice. Officials warned it could burn for days.

The blaze broke out around midnight, shooting flames into the dark as more than two dozen fire departments responded. There were at least two explosions, one involving a truck with gas tanks on it, Lora said.

Smoke billowed into the sky even after sunup, and Lora said firefighters planned to tap the Passaic River to keep dousing an inferno that could take days to extinguish.

“When you consider a recycling plant, everything inside is conducive for continuing to burn,” he told WABC, calling the building “a complete loss.”

The cause is under investigation, Fire Chief Patrick Trentacost said, but he doesn’t consider it suspicious. Fires are not uncommon in recycling plants, he said.

“A lot of oils get on the recycling, the cardboard that they pick up on the streets in the sanitation trucks. So, batteries, acids can start a fire. A lot of factors,” Trentacost told WLNY.

The flames erupted on a “punch-you-in-the-face cold” night, as the mayor put it, with temperatures in the teens. One firefighter was taken to a hospital with exhaustion, and another after falling on surfaces that were “like an ice-skating rink,” he said.

Firefighters did “a remarkable job, nonstop, just hitting the fire at every direction in order to contain it in that structure,” Lora said. There had been concern about the flames spreading, particularly to a former chemical factory that is now a woodworking firm.

“We’re going to be here for a few days dealing with this,” he said, also citing the impact on hundreds of employees at the plant and in neighboring structures.

Atlantic Coast Fibers processes cardboard, paper, plastic containers and other materials for recycling, according to its website. The family-run company dates back over 80 years.

The fire came two years to the day after a blaze at the Marcal paper plant in nearby Elmwood Park destroyed 30 of 36 buildings, as well as a familiar red sign visible from Interstate 80. About 500 people lost their jobs. The cause was never determined, but prosecutors said arson wasn’t suspected.