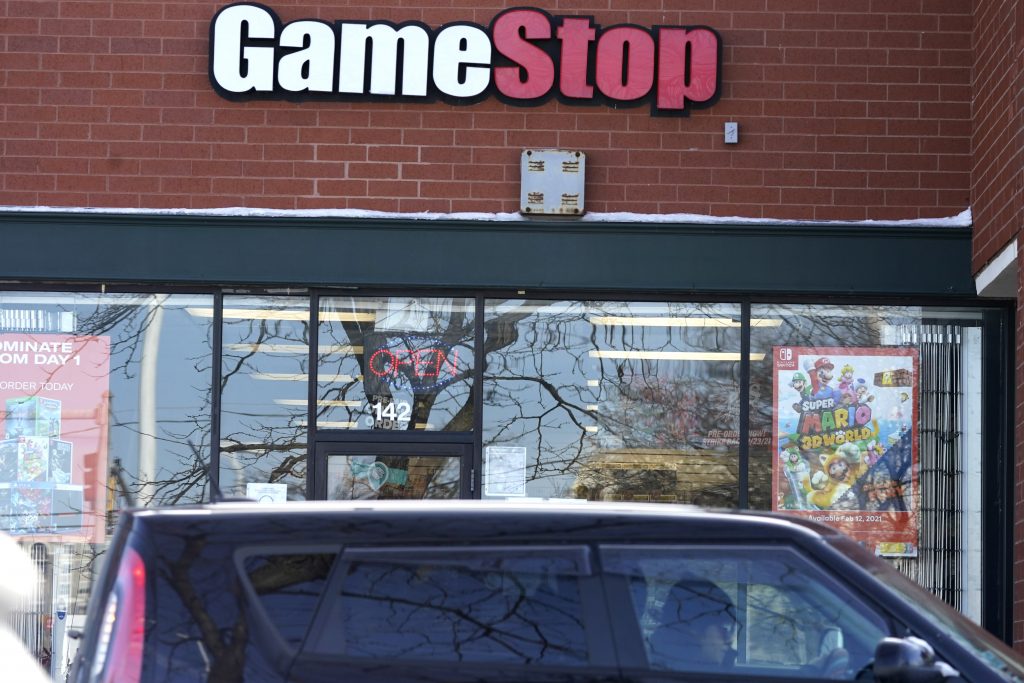 GameStop’s stock is back to the races Friday, and the overall U.S. market is down again, as the saga that’s captivated and confused Wall Street ramps up the drama.

GameStop shot up more than 70% in afternoon trading, clawing back most of its steep loss from the day before, after Robinhood said it will allow customers to start buying some of the stock again. GameStop has been on a stupefying 1,900% run over the last three weeks and has become the battleground where swarms of smaller investors see themselves making an epic stand against the 1%.

The moves are reverberating across Wall Street, as concerns rise about how much damage the frenzy could do as its effects spill out into the broader market. The big professional investors who had been banking on a drop for GameStop’s stock are taking sharp losses. Investors say that’s pushing them to sell other stocks they own to raise cash, and that is helping to pull down parts of the market completely unrelated to the revolt by Main Street investors.

The assault is directed squarely at hedge funds and other Wall Street titans that had bet the struggling video game retailer’s stock would fall. A couple have already essentially admitted defeat, with one saying Friday it would stop publishing reports on stocks it expects to fall. The army of smaller and novice investors, meanwhile, is pledging to keep up the momentum for GameStop’s stock in hopes of inflicting more pain on the financial elite.

The volatility around GameStop and a few other stocks has drowned out many of the other issues weighing on markets, including the virus, vaccine rollouts and potential aid for the economy.

“Our consideration is whether this is something that is a long-term influence or contained within a handful of companies,” said Tom Hainlin, national investment strategist at U.S. Bank Wealth Management.

Meanwhile, calls for regulators to step in are growing louder on Capitol Hill, and the Securities and Exchange Commission says it’s carefully monitoring the situation.

The S&P 500 was down 2.2%, as of 12:52 p.m. Eastern time. Some of the heaviest weights on the index were Apple, Microsoft and other Big Tech stocks that have been big winners for professional and other investors over the last year. The index is on track for its worst week in three months, with a 3.5% loss.

Other forces were also weighing on the market. Johnson & Johnson fell 6.7% for one of the larger losses in the S&P 500 after it said its vaccine appears to protect against COVID-19, though not as powerfully as rivals. Analysts said the results, which would require just one shot instead of the two required by other vaccine makers, were below expectations.

Some reports on the economy came in better than expected, though they remain weak. One showed Americans’ incomes rose in December, and another said their spending didn’t fall by as much as economists had expected.

“Our perspective is we still have a glass half full mentality,” Hainlin said. “Support from the Fed, a fiscal package and progress on the vaccines will ultimately overcome the challenges of COVID-19 and economic reopening.”

Elsewhere, investors watched virus infection spikes in Europe and Asia, renewed travel curbs and negotiations in Washington over President Joe Biden’s proposed $1.9 trillion economic aid package. Hopes for such stimulus for the economy have carried the S&P 500 and other major indexes back to record highs recently, along with enthusiasm about COVID-19 vaccines and the Federal Reserve’s pledge to keep the accelerator floored on its help for the economy. Low interest rates from the Fed can act like steroids for stocks and other investments.

“We are still moving towards a recovery from the pandemic, just … a lot bumpier than anyone had expected,” said Stephen Innes of Axi in a report.

But Wall Street’s focus remains squarely on GameStop and other moonshotting stocks. AMC Entertainment jumped 60.4%, and headphone company Koss nearly doubled. After their success with GameStop, traders have been looking for other downtrodden stocks in the market where hedge funds and other Wall Street firms are betting on price drops.

By rallying together into these stocks, they are triggering something called a “short squeeze.” In that, a stock’s price can explode higher as investors who had bet on price declines scramble to get out of their trades.

The smaller investors, meanwhile, have been crowing about their empowerment and saying the financial elite are simply getting their comeuppance after years of pulling away from the rest of America.

“We’ve had their boot on our necks for so … long that the sudden rush of blood to our brains when we have just a (asterisk)chance(asterisk) of getting free has made me feel … well, it’s made me feel,” one user wrote on a Reddit discussion about GameStop stock.

“I’ve been isolated throughout this entire pandemic and live in a state far from home or any sense of community, ”another user replied. “I’d kind of just… given up. These last few weeks I’ve started caring again; feeling impassioned again; wanting more again.”

Most of Wall Street and other market watchers say they expect the smaller-pocketed investors who are pushing up GameStop to eventually get burned. The struggling retailer is expected to still lose money in its next fiscal year, and many analysts say its stock should be closer to $15 than $330.

In response, many users on Reddit have said they can keep up the pressure longer than hedge funds can stay solvent.

The SEC said Friday that it is evaluating “the extreme price volatility of certain stocks’ trading prices,” warning that such volatility can expose investors to “rapid and severe losses and undermine market confidence.”