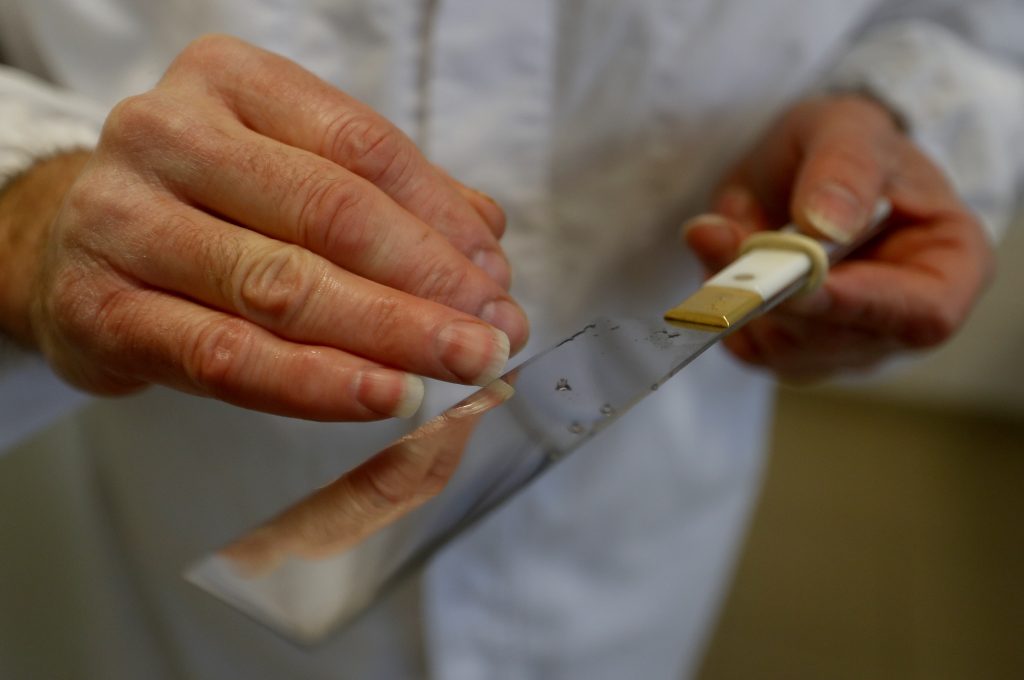 In a small room lined with religious texts, an Orthodox rabbi demonstrates how knives are sharpened and inspected before they are put to use slitting the throats of chickens, geese and other poultry at a kosher slaughterhouse in Hungary.

A shochet, someone trained and certified to slaughter animals according to Jewish tradition, whets a knife on increasingly fine stones before drawing the blade across a fingernail to feel for any imperfections in the steel that might inhibit a smooth, clean cut and cause unnecessary pain.

“One of the most important things in kosher is that the animal doesn’t suffer,” said Rabbi Jacob Werchow, who oversees production at Quality Poultry, a 3 1/2-year-old slaughterhouse that supplies nearly 40% of Europe’s kosher poultry market and a large portion of the foie gras sold in Israel.

The methods employed at the facility in the village of Csengele are based on ancient Judaic principles commanding the humane treatment of living creatures. They also are at the center of a debate about how to balance animal rights and religious rights as parts of Europe limit or effectively ban the ritual slaughter practices of Jews and Muslims.

Companies like Quality Poultry have found new export markets since the European Union’s highest court last month upheld a law in Belgium’s Flanders region that prohibited slaughtering animals without first stunning them into unconsciousness. But the European Court of Justice ruling also has provoked fears of eventual EU-wide prohibitions on ritual slaughter, and aroused memories of periods when Europe’s Jews faced cruel persecution.

“This decision doesn’t only affect the Belgian Jewish community, it affects all of us,” said Rabbi Slomo Koves of the Association of Hungarian Jewish Communities, which owns the Csengele slaughterhouse. “If this is the case in Belgium and the court has given it moral approval, that might start a process on a larger scale. If you go down this logic, the next step is you also cannot not sell meat like this in these countries.”

The EU has required the pre-stunning of animals since 1979, but allows member states to make religion-based exceptions. Most do, but along with Flanders and the Wallonia region of Belgium, Slovenia, Denmark and Sweden, as well as non-EU members Switzerland, Iceland and Norway, have done away with religious exemptions, meaning kosher and halal meat must be imported.

Jewish law forbids injury or damage to animal tissues before slaughter, and modern stunning practices can cause death or irreparable injuries that would render meat and poultry non-kosher, according to Koves.

Rabbis Koves and Werchow said they believe the kosher slaughter method, known as shechita, is no less humane than the methods used in conventional meat production. In addition to the intensive process of sharpening and inspecting the knives, the shochet is trained to make the cut in a single smooth motion, severing the animal’s nerves and draining the blood from the brain in seconds.

“Whatever you think about…whether kosher slaughter is better for the animal than regular slaughter, you are basically putting animal rights ahead of human rights,” Koves said. “If people are going to ban our rights to have kosher food, that means that they are limiting our human rights. And this, especially in a place like Europe, brings very bad memories to us.”

Laws requiring the pre-slaughter stunning of animals appeared in some European countries as early as the late 19th century. Adolf Hitler mandated the practice in 1933 just after becoming chancellor of Germany, one of the first laws imposed by the Nazis.

Jewish and Muslim groups challenged the Flanders law in Belgium’s Constitutional Court, which referred it to the European Court of Justice for a ruling on its compatibility with EU law.

The Court of Justice’s advocate general advised the court to strike the Flanders law down, arguing it violated the rights of certain faiths to preserve their essential religious rites. But the court disagreed, finding the law “allow(s) a fair balance to be struck between the importance attached to animal welfare and the freedom of Jewish and Muslim believers to manifest their religion.”

The animal welfare minister for the Brussels region of Belgium, where stunning is not mandatory, said the ruling would breathe new life into the mandatory stunning debate there. The Brussels chapter of the New Flemish Alliance, a center-right party whose members led the push for the law in Flanders, said it would now submit a proposal for an ordinance to ban slaughter without stunning in the capital region.

The Hungarian government helped finance the slaughterhouse in Csengele, and Prime Minister Viktor Orban joined Jewish groups in condemning the court’s decision as an assault on religious freedom. In a January letter to the U.S.-based Jewish Agency for Israel, Orban wrote that his government would “spare no effort to raise our voice against (the decision) in every possible international forum.”

Koves and other chief rabbis in Europe are looking into ways to appeal the EU court’s decision.