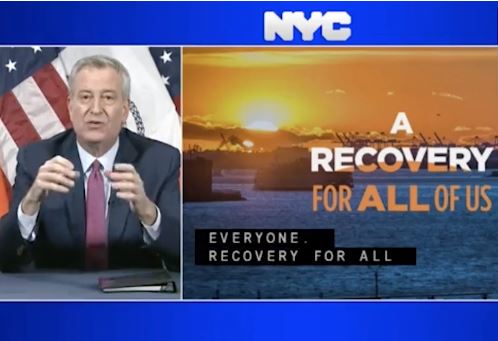 In his last State of the City address, New York City Mayor Bill de Blasio announced his plans for the city as he enters his last year in office.

He announced an initiative — dubbed the ‘Dinkins Plan’ after the late Mayor David Dinkins — to transfer the Commission to Combat Police Corruption and the NYPD’s Inspector General from the Department of Investigation to a newly empowered Civilian Complaint Review Board. The new CCRB would be empowered to independently launch its own investigations and enables investigators quick access to body camera footage and employment records for officers.

The plan also calls for the creation of a “Patrol Guide Review Committee” to examine “situations where no misconduct was found because the actions were within policy, but the policy itself was problematic.”

In addition, the mayor called for creating new bike lanes on the Brooklyn and Queensboro bridges, and hiring 10,000 workers to form a new ‘Cleanup Corps’ to help clean and beautify the city.

In order to help small businesses which have been devastated by the pandemic, the city will offer $150 million in tax credits and low-interest loans to help revitalize this sector.

De Blasio pledged that the city will administer 5 million coronavirus vaccine shots if the Biden administration delivers on its promise to increase the amount of doses delivered to the city. At this time, the city should receive 124,000 first doses of the two-shot inoculations per week for the next three weeks.