And the Trees Answered, Amen 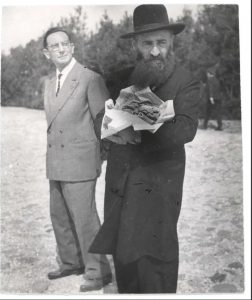 A few days ago I received a copy of the picture of one of our readers*, and I realized that the distinguished Yid in the image was Harav Yitzchak Yedidya Frankel, zt”l, a greatly respected Rav from a previous generation, who served as a Rav in Tel Aviv, one whom I had the privilege to know as a close friend of our family. Harav Frankel was the father-in-law of, ybl”c, Harav Yisrael Meir Lau.

It was the caption — which indicated that the photo had been taken in Treblinka in 1953 — that struck me. Eager to learn the story behind it, I sent the image to his grandson, Harav Moshe Chaim Lau, a Rav in Netanya, and a contributor to Inyan magazine. Within hours, I received a detailed reply.

“This extremely emotional photo was actually taken in 1963,” Harav Lau informed me. “The Polish government invited my grandfather, who had served as Rav before the war in the Polish city of Rypin, to take part in an event marking the twentieth anniversary of the Warsaw Ghetto Uprising. My grandfather related to me that the Bobover Rebbe, Harav Shlomo Halberstam, zy”a, had also been invited, but decided not to join. After receiving a brachah from the Gerrer Rebbe, the Beis Yisrael, zy”a, who told him, “Travel l’shalom; and I hope that you will also return l’shalom,” he set out a few days after Pesach to Poland.

“Indeed, all my grandfather’s friends later said that the trip dramatically changed him,” Harav Lau continued.

“At the event in Warsaw, Harav Frankel was the only individual who looked like a Rav on the stage. The only Jewish speaker was Nachum Goldman, a leading Zionist and president of the World Jewish Congress, who spoke about the joint suffering of Jews and Poles. The other speaker spoke only about the suffering of the Polish people and didn’t even mention the Jews.

“Deeply distressed by what he heard, though he had not been asked to speak, Harav Frankel rose from his place and took the microphone. In his Chassidic Polish havarah he began to recite, ‘Yisgadal v’yiskadash Shmay Rabbu.’

“One of the organizers approached him and put his hand on Harav Frankel’s shoulder, sending a subtle message that in a communist country one cannot simply do as one sees fit. But the Rav courageously continued to recite the entire Kaddish.

“Then something surprising happened,” Harav Lau, who heard the story from his grandfather, related. Some Jews, who had returned to Warsaw after the war and were unable to leave Poland, heard about the event. Since they had not been invited to attend, they had climbed up some trees earlier in the morning near where it was taking place and watched from there. When they suddenly heard Kaddish being recited, they loudly responded “Umayn, yehay Shmay Rabbu.”

Members of the foreign media who were present reported that “the Rabbi said a prayer and the trees answered, Amen.”

The Polish officials could not ignore Harav Frankel’s presence anymore and offered him a driver with a car. Among the sites he traveled to was Treblinka. As he walked on the grounds of the death camp, he realized that he was walking on human bones that were protruding from the ground. Harav Frankel bent down and picked up some of the remains, and he asked what they were. The Pole replied that these are remains of Jews murdered, Hy”d — indeed, Harav Frankel was holding these remains when this picture was taken.

The Pole who was accompanying him explained that every year, they would bring earth with which to cover these bones, but after the snow would melt, the bones would rise to the surface again like the blood of the murdered Jews was boiling.

Harav Frankel brought these remains back with him to Israel and arranged for them to be buried in the Nachalat Yitzchak cemetery in Tel Aviv, with a special matzeivah reading “Treblinka” complete with a ner tamid erected over the burial spot.

January 27 is a date established by the United Nations as International Holocaust Remembrance Day. However, the vital work of educating the world about Churban Europa is something which must be stressed throughout the year. Amid rising anti-Semitism, educating the broader public about the Holocaust is the minimum appropriate hishtadlus, one that can help discourage overt acts of hatred and helps encourage law enforcement to act in a more assertive manner.

There is much work that needs to be done within our community as well. We must educate the youth — who are fourth- or even fifth-generation after the Churban. For far too many of them, the Holocaust is perceived to be of the ancient past, only slightly more recent than the expulsion of Jews from Spain.

In the meantime, the number of living survivors is dwindling at a frightening rate. The COVID pandemic, which ravaged our community and took so many lives of the elderly, and particularly those in nursing homes, took a terrible toll on survivors. Many of those who, baruch Hashem, are still with us, are feeble and frail and very much alone, afraid to leave their homes or let in visitors because of the ongoing danger of COVID. We must redouble our efforts to be there for them in every way possible, and to do what we can to make sure that their experiences are recorded for posterity. We must also treasure those who are still with us, ad meah v’esrim shanah.

For the Six Million, the vast majority of whom have no kever, the most fitting and powerful memorial is precisely what Harav Yitzchak Yedidya Frankel did on that fateful day in Warsaw, the recital of Kaddish and the plea of “Yisgadal v’yiskadash Shmei Rabba …”